The Most Unique Experiences to Have in Spain 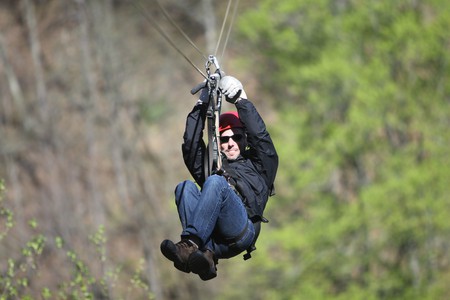 While many tourists come to Spain for its sun, sea and incredible cuisine, there are many more unusual experiences you can have in the country. We take a look at some of the best.

The Caminito del Rey is a walkway hugging the walls of a steep gorge in El Chorro in the province of Malaga, southern Spain. It was christened ‘the world’s most dangerous footpath’ after five people died along the route in 1999 and 2000. Following the deaths, the path was closed for repairs for over a decade, reopening to the public in 2015. It might have new safety measures, but the 3km pathway is still not for the faint-hearted.

Thrill seekers look no further: Spain is home to the world’s fist cross-border zip line, Límite Zero, which crosses the River Guadiana from Spain into neighbouring Portugal. Users fly down the 720-metre wire at speeds between 70-80km/hour and arrive in Portugal an hour behind, because of the time difference. Prepare for spectacular views across the river and its surrounding olive groves.

With #Limitezero you will zip 720m and it will last for 60 seconds. When you land, it will even be an hour earlier!

A post shared by Allianz Global Assistance MEA (@allianzglobalassistancemea) on Jul 17, 2017 at 12:58am PDT

In 2016, Lanzarote pioneered Europe’s first underwater museum when it submerged a series of sculptures off its southern coastline. The Museo Atlántico (The Atlantic Museum) is the brainchild of British artist Jason deCaires Taylor, who has also created underground sculptures in Mexico and the West Indies. Lanzarote’s museum, submerged 12 metres below the surface, is accessible by scuba divers and visible from glass bottom boats.

Spain is renowned for its world-class museums like Madrid’s Prado and the Guggenheim in Bilbao, but slightly more under-the-radar is its melon museum – the only museum in the world dedicated to the refreshing fruit. The town of Villaconejos has a long history of melon farming and is home to the museum dedicated to the fruit and the people who grow it. Discover the history of melon growing and harvesting and, if you happen to visit in the autumn, enjoy the town’s annual melon festival.

Have dinner in the world’s oldest restaurant

Madrid is home to the world’s oldest restaurant, Sobrino de Botín, which was founded in 1725 (it has the Guinness World Records certificate proudly displayed in the window to prove it). Follow in the footsteps of Ernest Hemingway and take a seat in the wood-panelled dining room to enjoy the house speciality: roast suckling pig.

You might have been sunbathing on Spain’s balmy southern coast by morning, but come afternoon, you can hit the pistes of the Sierra Nevada Ski Station, Europe’s most southerly ski resort, located just 27km from the city of Granada. The highest ski resort in Spain has 105km of ski runs and the ski season can last from November until early May. The resort often holds winter sports competitions, and played host to the FIS Ski and Snowboard World Championships in 2017.

Dance in the world’s biggest nightclub

Ibiza, Spain’s hedonistic party island is, perhaps unsurprisingly, home to the world’s biggest nightclub. Privilege, a super club with a capacity for 10,000 people, is officially recognised by the Guinness World Records as the biggest club in the world. The legendary club, one of the first big clubs to open in Ibiza in the 1980s, is on many revellers’ must-visit lists when they holiday on the island.