The Most Unique Experiences to Have in Cádiz, Spain

Though often overlooked in favour of more famous southern Spanish cities such as Seville and Granada, Cádiz richly rewards the off-piste traveller. From getting lost in its enchanting Old Town to joining the local fishermen on the beaches at sunset, here are the most unique experiences to have in Cádiz.

Ask tourists or Andalusians about southern Spain’s most romantic and picturesque barrios, and they’ll probably mention Granada’s Albaicin, or Seville’s Triana. Few, if any, are likely to point you towards the Old Town of Cádiz. Yet this underdog city’s oldest quarters – from the characterful fishing district of La Viña to the cluster of narrow shopping streets around the cathedral – have an unpolished and slightly melancholy charm all of their own. To better appreciate them, put away the smartphone and wander without aim.

The people of Cádiz are famous throughout Spain for two things: their impenetrable accent and their sense of humour. The locals’ fondness for interjecting jokes or witty remarks into even the most prosaic of conversations has earned them the nickname graciosos (literally ‘funny people’) or, more sarcastically, graciosillos (people who try to be funny). This can make for some entertaining bar-room banter, providing you can make out the Spanish amongst the abruptly terminated words and gravelly, rapid-fire slang. 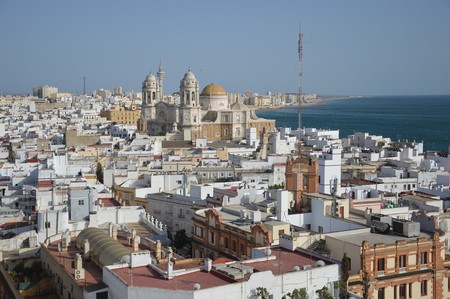 Take a break under the rubber trees

Even for travellers who can usually take or leave visits to parks or botanical gardens, two spectacular trees in Cádiz are well worth a look. Towards the western edge of the Old Town, outside the university’s main entrance and just outside the Genoveses Park, are two enormous rubber trees. These gnarled giants are said to be over a hundred years old and make the talking and walking trees in Lord of the Rings look like twigs by comparison. Bask in their shade for a while, and imagine the history that has played out in the streets surrounding their great branches.

Hang out with the sunbathing cats

As you walk along the seafront, with the Atlantic to your right and the cathedral ahead and to your left, keep looking over the sea wall at regular intervals. Sooner or later you will come upon a colony of wild cats that live amongst the huge man-made cubes piled up to protect Cádiz from sea storms. They doze and sunbathe on the rocks by day and retreat into their little huts – provided by the Cádiz Felina collective that looks after the colony – by night. The cats seems unfussed by the seagulls with whom they share their chill-out spaces, so they won’t mind if you stop by for a break, either. 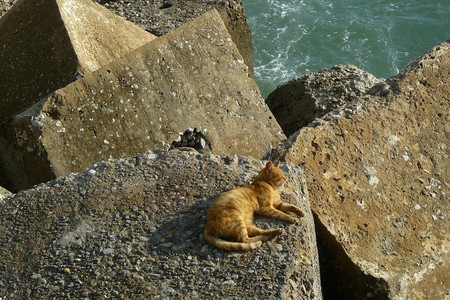 A cat sunbathes by the sea in Cádiz | © cocoparisienne/Pixabay

Go to the Carnival

Although every major Spanish city has its annual Carnival, the one Cádiz is famous in Spain for being a little bit different. At its heart are the roaming groups of street performers, known as comparsas or chirigotas, who stage satirical musicals poking fun at current affairs and popular and unpopular Spanish celebrities. They train throughout the year and their shows are characterised by great wit and lyrical invention; indeed, as well as performing in the streets throughout Los Carnavales, both groups also formally compete for a prize in the city’s Falla Theatre. The event usually takes place in February.

One of the best ways of taking the pulse of any city’s local life is heading to its food markets, and in Cádiz doing so is a particularly invigorating experience. The city’s Mercado Central is located a few minutes’ stroll from the cathedral and just off the charming Plaza Topete, unofficially referred to as the Square of the Flowers (it’ll be obvious why). Visit mid-morning to see it in full flight. Old ladies haggle for fish so fresh that it’s still moving, like the crabs that writhe around in their plastic buckets; the men, meanwhile, engage in an equally strenuous task – that of having a sherry or caña (small beer) in one of the many no-frills bars and shooting the breeze at top volume. 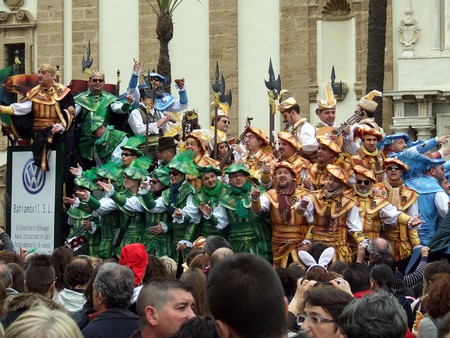 Fish on the beaches

Fishermen are always to be seen on Cádiz’s two beautiful beaches, gazing out to the Atlantic as they wait for something to bite. What better way to experience the city’s exquisite setting than to join them? Playa Caleta is the smaller of the two beaches and sits on the western end of the Old Town, whilst Playa Victoria stretches away, seemingly to the horizon, along the city’s eastern extremity. Both offer untainted yellow sands, wonderful bathing and, at sunset, a truly humbling location to try and catch a little supper. 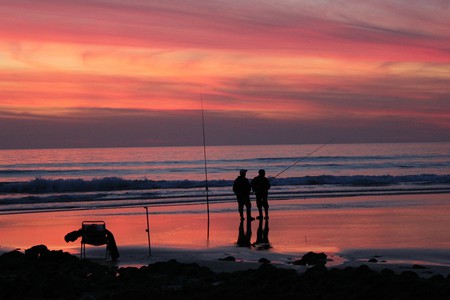