The Most Scenic Walking Routes in Barcelona 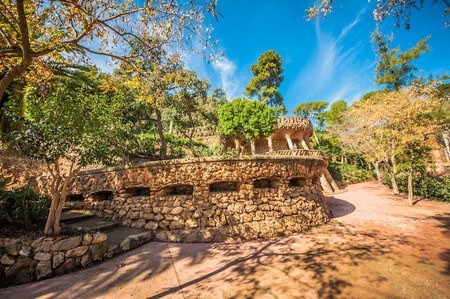 Walking is often one of the best ways to explore a destination, and just because you’re in a city doesn’t mean you can’t enjoy a good stroll. These urban trails all offer something unique, from sweeping views of the city to a tour of its finest architecture.

If you’re a fan of urban walks and don’t mind having to share the pevement, then the Passeig de Gràcia is a great urban walk. Starting from the Plaça de Catalunya and stretching to the limits of the neighbourhood of Gràcia, this street is home to some of the most famous and impressive buildings in the city, such as the Casa Batlló and La Pedrera. Measuring 1.3 kilometres (0.8 miles) in length, walking up one pavement and down the other means you get to enjoy the views on both sides.

The Carretera de les Aigües is one of Barcelona’s most popular inner-city hiking trails, as it combines both the feeling of the great outdoors with some pretty epic views. The trail runs along Tibidabo Mountain on the outskirts of the city, however it’s entirely flat – in fact, it got its name, ‘Road of the Waters’, from the water pipes that used to run along it. The trail is nine kilometres (5.5 miles) long and stands some 450 metres (1,500 feet) above sea level, offering exceptional panoramic views of the city and sea. To get there, you’ll need to walk uphill from Vallcarca or get a taxi to the beginning of the trail. 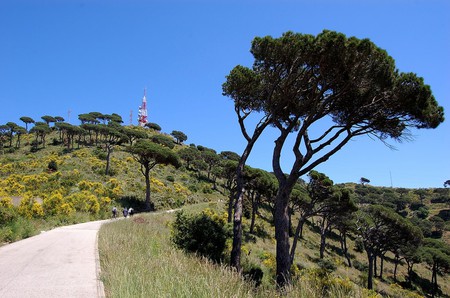 Located at the summit of Montjuïc Hill, the castle has been around in some shape or form since the Early Middle Ages. To get to Montjuïc Castle, you can start at the bottom of the hill, which would make for a lengthy walk with a climb, or alternatively get the number 150 bus that takes you just beneath the entrance. From there you can complete a scenic tour of the castle, with views of the port and airport. Try to time your walk with the opening hours of the outdoor bar, La Caseta del Migdia, round the back of the castle

The boardwalks and beachfront

Of course, one of the most scenic walks you can enjoy in Barcelona is the long boardwalk stroll from the tip of the Barceloneta to the Llevant Beach by the Poblenou neighbourhood. Along the way you’ll pass iconic architecture, such as the W Hotel, Arts Hotel and Mapfre building, as well as public art installations like Frank Gehry’s Golden Fish. Of course, you also have the Mediterranean to gaze at the whole time… 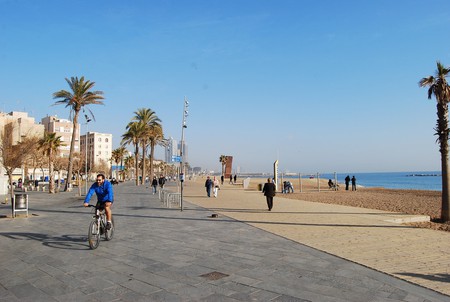 Walk along the beach in Barcelona | © Nicolás Boullosa / Flickr

Starting in the neighbourhood of Poble Sec, walk up Passeig de l’Exposició and you’ll come across the entrance to the Jardins del Teatre Grec, so named after the open-air theatre carved into the rock and modelled on an ancient Greek amphitheatre. After taking a minute to sit and admire the surroundings, climb the stunning Generalife Stairs – bordered by trickling waterfalls – to arrive at the Laribal Garden. Finish off with a stroll through the Joan Maragall Garden, which extends behind the National Palace of Catalonia and is home to a number of statues, garden features and waterfalls.

Parc Fòrum and the Besòs river

If you want to explore a different side to Barcelona, head to the Parc Fòrum and the shores of the Besòs River. Long the industrial heart of the city, the area is home to a mix of abandoned factories, converted warehouses and contemporary architecture. The giant solar panel is perhaps the Parc Fòrum’s most iconic feature, but the Science Museum building, designed by Herzog & de Meuron, is equally noteworthy. Continuing away from the city, you’ll arrive at the shores of the Besòs River, home to a rather diverse flora and fauna. If you’re feeling adventurous, you can even venture over the bridge into the seaside town of Badalona. 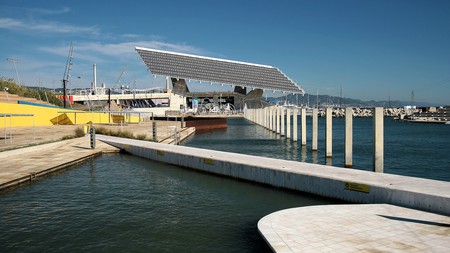 If these days the Park Güell is seen more of as an architectural attraction – and indeed part of it is cordoned off and charges an entrance fee – a large part of the park is open to the public and free to explore. What’s more, you’ll be able to admire some of the most famous features of the park, albeit from a distance. Afterwards, follow the paths (designed by Gaudí of course) to the heights of the park and admire the views of the city. There’s even a continuation of the park that hasn’t been developed, down the back of the hill on the far side.