The Most Beautiful Hilltop Towns Along Spain's Mediterranean Coast

Tossa del Mar, Catalonia; Eneko Bidegain/flickr
Spain’s 1000-mile stretch of Mediterranean coast boasts some truly stunning hilltop towns. From the charming pueblo blanco of Mijas, where donkeys are still used as taxis, to the medieval walled town of Tossa del Mar in Catalonia, read on for the most beautiful hilltop towns on the Spanish Mediterranean.

Located on Málaga’s stunning coastline, Mijas‘ altitude almost 430 metres above sea level enables you to survey the blue expanse of the Mediterranean as well as the mountainous landscape that rolls away in every other direction. Mijas’ spectacular location means you’ll find plenty of tourists here, but it hasn’t lost its typical pueblo blanco charm, as you’ll find out if you have to use a taxi. Upon reaching the rank, a row of donkeys rather than cars will await your fare. Mijas is divided into two residential and tourist areas: Mijas pueblo sits on the hilltop, whilst Mijas costa is where you’ll find the beaches.

Architectural Landmark
Often voted “Spain’s Most Beautiful Village” – or at least one of them – the pretty hilltop settlement of Frigliana is located just a few miles inland from the the popular beach-town of Nerja. Its newest neighbourhoods – where most of the tourist accommodation is – lie at the bottom of the hill, but as you wander up the steep little lanes you arrive into the old quarter – a gorgeous barrio of bright white houses, primary-coloured flowers and beautiful old churches (San Antonio is especially worth a visit). And from the very top, the 300-metre elevation makes for some truly humbling ocean views.
More Info
Open In Google Maps
Frigiliana, Andalusia, 29788, Spain
View menu
Visit website
Visit Facebook page
Send an Email
Give us feedback

Perched on a hilltop on Granada’s “Tropical Coast” – so-called because it’s said to have a micro-climate all of its own – Almuñécar is often overlooked in favour of nearby Nerja and is all the more lovely for it. It was a favourite with the English writer Laurie Lee, who was living here when Spain’s Civil War broke out in 1939. Down at the bottom, some wonderful bathing can be enjoyed off the dark pebble beaches, whilst the old part of town stretches back up the hill behind them. The best views of the Mediterranean are from the Peñones de San Cristobal viewing point or from the ramparts of the San Miguel castle.

The attractive town of Altea is one of the Costa Blanca’s unspoilt gems – which is remarkable when you bear in mind that the major restort of Benidorm lies just six miles to the south. The old town was built on the hilltop in the 16th century and walled-in to protect it from attackers: today, two of the original entrances to Altea remain – the Vell Portal and Portal Nou. Take the “Mestre de la Música” steps up to the centre (you’ll need a bottle of water for the climb) and admire the distinctive blue-and-white tiled domes of the “Lady of Solace” church, which is surrounded by some excellent restaurants with Mediterranean views. 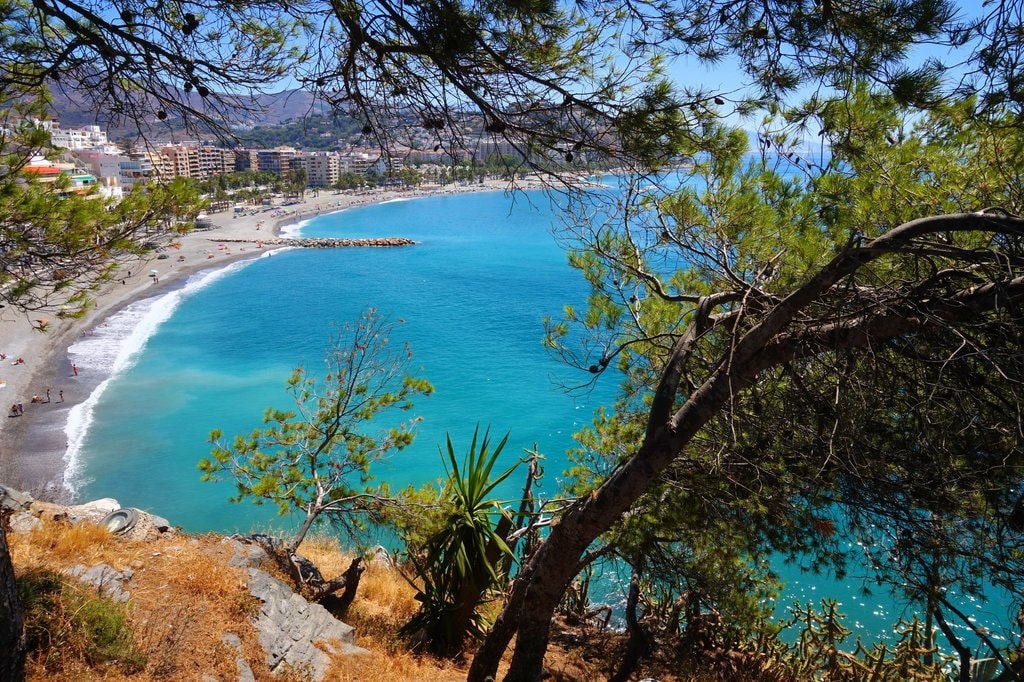 The beach at Almuñécar; the old town is behind it; courtesy Encar Novillo

One of the most sought-after destinations on Catalonia’s coastline is Tossa del Mar, a charming medieval town that spreads itself up a verdant hillside with the famous Villa Vela castle looking out to sea. The medieval town is still surrounded by the original defensive walls and is a delightful place to stroll, glimpsing sea views in between the centuries-old buildings as you go. The views out to the Mediterranean from the castle’s turrets and the beachside bars are wonderful: no wonder the artist Marc Chagall called Tossa a “blue paradise”.

Game of Thrones fans might recognise this stunning hilltop town on Valencia’s Orange Blossom Coast, because the popular series was filmed here in 2015. It’s easy to see why it was chosen as a location: the walls of its old town hug the periphery of a steep outcrop of rock jutting into the Mediterreanean, at the top of which sits the magnificent Papa Luna Castle. Wander around the little cobbled streets (pretending you’re in Game of Thrones, obviously) and sit yourself down on a sea-view terrace if the heat starts getting to you. Peñiscola is the perfect destination for a daytrip from Valencia, located as it is just 90 miles north of Spain’s third largest city. 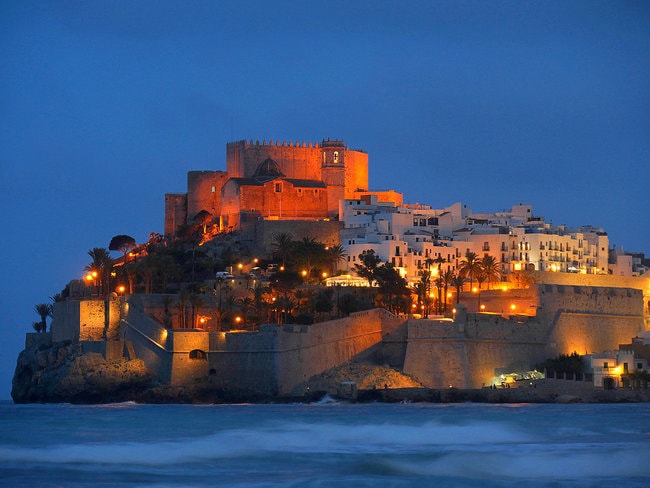 The castle and old town of Peñiscola, Valencia; Zoi Koraki/flickr

Located about an hour’s drive from the fascinating city of Almeria, Mojácar is a dense cluster of typically whitewashed Andalusian houses clinging to a sea-facing hillside. Despite the fact that it has one of the largest expat populations in Spain, Mojácar has never lost its old-school charm, and its Moorish quarter is a delight to explore. The town sank into depression after WWII and lacked running water as late as the 1960s, when its entrepreneurial mayor started offering free land to people who wanted to restore its oldest buildings or construct new ones.