The Most Beautiful Beaches to Visit in Andalusia

Playa de Bolonia, Cadiz; Carlos ZGZ, flickr
Andalusia’s 600 miles of sun-soaked coastline is home to some of the best beaches in the Mediterranean, let alone southern Spain. From the rugged desert of Almeria – which has starred in many a Western film – in the east, to the Atlantic coast of Cadiz in the west, these are Andalusia’s most beautiful beaches.

Not for nothing have many Western films – including the Clint Eastwood classics – been set in the sun-baked landscape of Almeria. This is one of southern Spain’s most rugged and beautiful provinces and the Playa de los Genoveses – located on the eastern coast of the vast Cabo de Gata natural park – is one of its best. Make sure you come fully equipped if you’re spending a day on Los Genoveses, as this is a truly unspoilt beach: no bars, no shops, no boat rental companies, no toilets – just 1,200 metres of white sand, undulating dunes, cacti, eucalyptus trees and perfectly blue sea.

The province of Cadiz, on Andalusia’s Atlantic coast, is home to some of the area’s most stunning beaches. Most famous and popular of them all is Zahara de los Atunes, which stretches southwards for over 6 kilometres from the tuna fishing village after which it is named. In contrast to Los Genoveses, this is a fully-equipped beach, with chiringuitos and restaurants, watersports, bathroom facilities and flags to show the changing state of the sea. Crystal-clear, Caribbean-esque waters and the privacy afforded by its vast expanses only add to Zahara’s attraction; it is a favourite amongst Spanish celebrities and politicians. 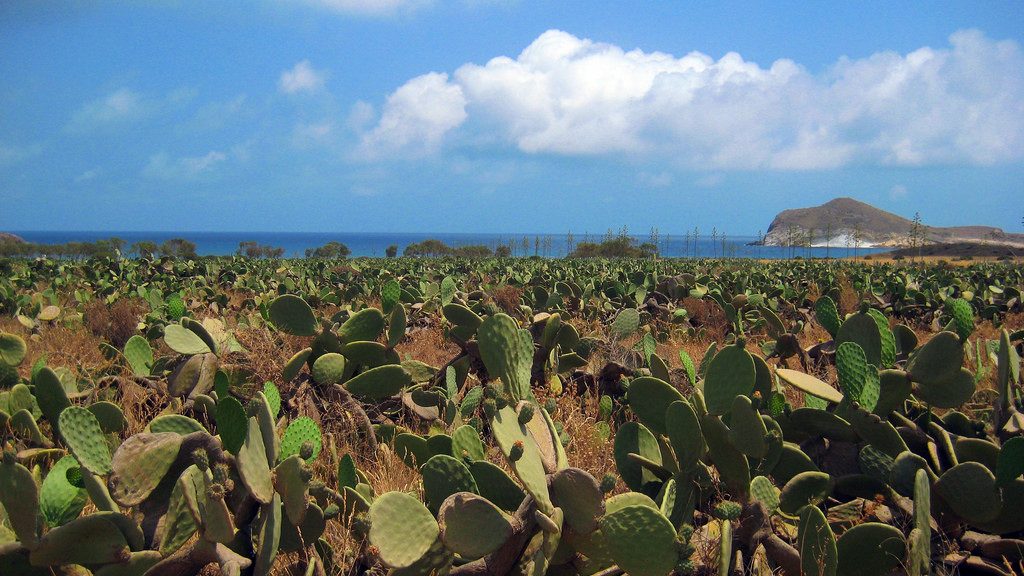 Looking out over the cacti towards Playa de los Genoveses, Almeria; Cayetano, flickr

One of the best things about being in Málaga, especially on a sweltering summer’s day, is the city’s proximity to a cluster of superb beaches. The Playa Malagueta is the closest of them all and is reached by just a 10-minute walk along the lovely promenade at the east end of Málaga’s great port. Its 0.6 mile-long, man-made stretch of fine sand provides the perfect setting for a refreshing dip and a dose of Andalusian sun, before lunch or drinks in one of the many excellent restaurants and bars on the nearby Paseo del Muelle Dos.

A little further eastwards along the coast from Playa Malagueta is Playa Caleta, another superb city-beach known for being the most well-maintained in the area. Despite its proximity to the city center, Caleta doesn’t feel closed-in, grimy or overcrowded: from its clean sands are beautiful views of the rough, mountainous terrain that surrounds Málaga. Cool little beach bars along its length and a range of watersports for those who quickly tire of sunbathing complete Caleta’s offering. 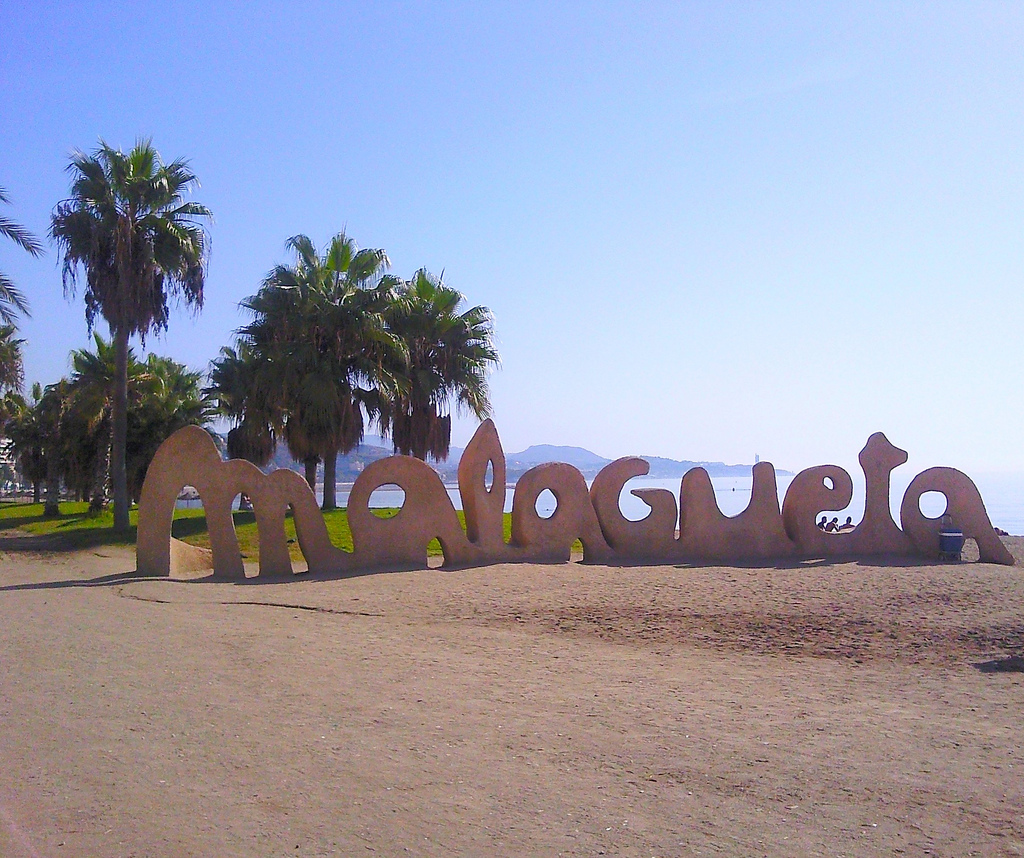 If you’re after an urban beach that offers beautiful views and bathing, then La Victoria takes some beating. The main “city beach” in Cadiz, this busy, popular strip of sand runs for 2,800 metres along Andalusia’s Atlantic coast and backs on to Paseo Maritimo. This lively promenade is a lovely place to stroll or to gaze out over the ocean whilst you enjoy some of the freshest fish in Cadiz.

Protected on either side by dramatic black rocks, the “Beach of the Dead” is another of Almeria’s star attractions. If the name sounds morbid, rest assured that a day spent on this gorgeous stretch of sand will be far from gloomy. Like the nearby Playa de los Genoveses (see above), this beach – although hugely popular – has remained as nature created it, as you’ll begin to realise as you make the 15-minute trek from the parking area through dunes and sun-baked scrubland. It’s well worth the effort, though, as once you’ve set up camp you can enjoy some of the clearest waters to be found on the Almerian coast. 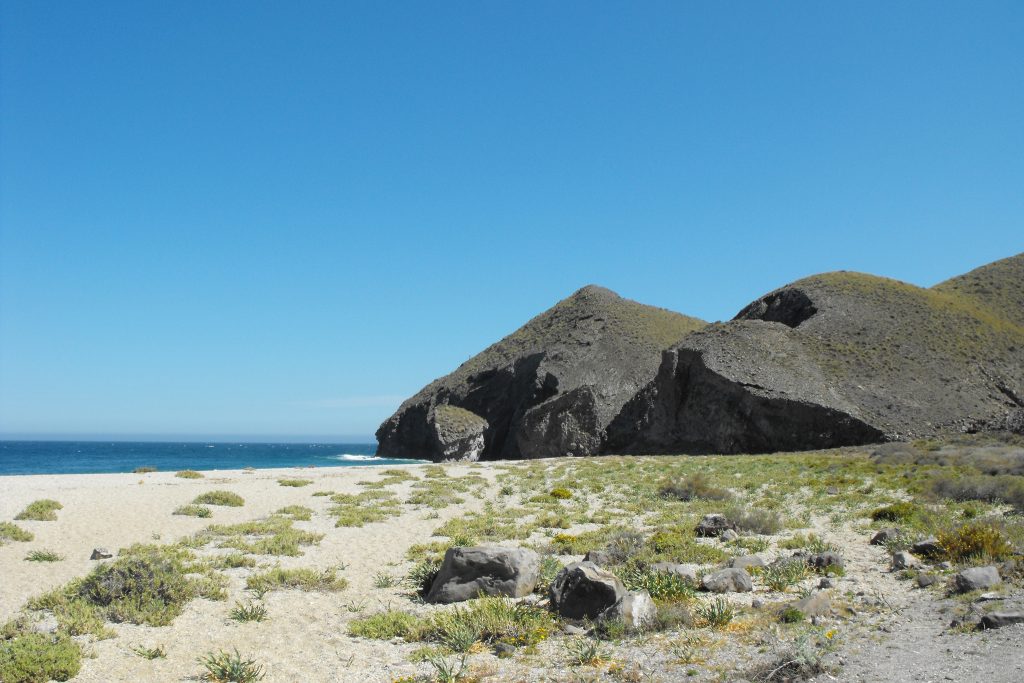 When sun-seeking holidaymakers touch down at Málaga’s busy international airport, one of the first places they head after baggage reclaim is Nerja, a charming ex-fishing village an hour’s drive eastwards along the coast. Despite its huge popularity with tourists, the coastal stretch that is dominated by Playa Burriana has retained its traditional, fishing-orientated ambience. Though only about half a mile long, Burriana has absolutely everything you could want for an epic day and evening at the beach: an unbroken row of chiringuitos serving some of the best seafood around, beautiful views, watersports – and all just a 15 minute walk (albeit up rather a steep hill) from the town center.

Consistently named as one of the best beaches in Spain, the Playa de Maro (near the charming fishing village of the same name) is ideal for sun-seekers who love some rugged scenery to admire whilst catching their rays. Dramatic rock formations tower around this small cove, from which the famous Maro waterfall can be observed cascading off the verdant clifftop above. The equally impressive underwater scenery makes Maro popular for snorkelling and diving as well. 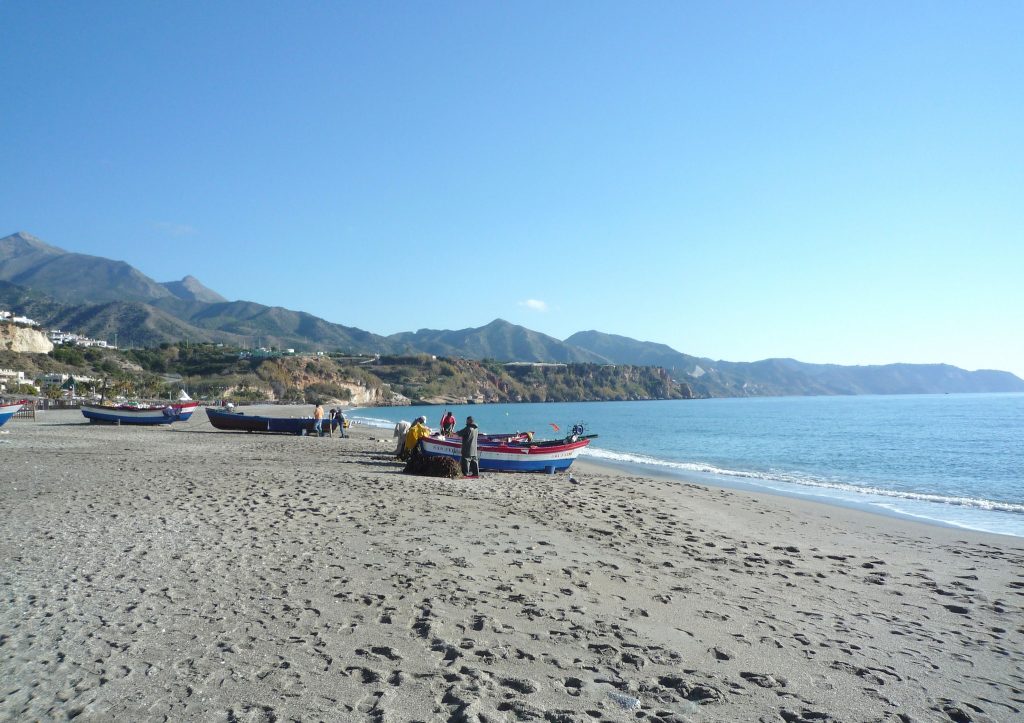 Estepona is one of the prettiest, most charming towns on Málaga’s coastline. It’s often overshadowed as a tourist destination by nearby Marbella – a fact which only enhances its attractiveness, of course. Estepona also has one of the loveliest beaches in the province, with a mile-and-a-half of fine grey sand and tranquil bathing easily accessible from the town’s main promenade, the Avenida España. Estepona’s slight underdog status among visitors to the Costa del Sol means that, although it’s popular with locals, it never becomes uncomfortably packed, even in August. This is the perfect place to set up camp for the day and from which to explore delightful Estepona itself.

Less than 20 miles east along the coast from the unspoilt oasis of Estepona and you’re in a different world. Marbella has carved out a reputation for itself as being the loudest, most brash and bling destination on the south coast of Spain; a favorite among the world’s millionaires and billionaires. Playa Puerto Banús is one of the best-known beaches close to the the city (5.5 miles south-west of Marbella) and offers a slightly quieter environment than the crowded and noisy sands of Marbella itself. Situated along the length of Puerto Banus’ flashy marina, this clean and spacious beach is lined with smart beauty salons and sleek bars and restaurants. 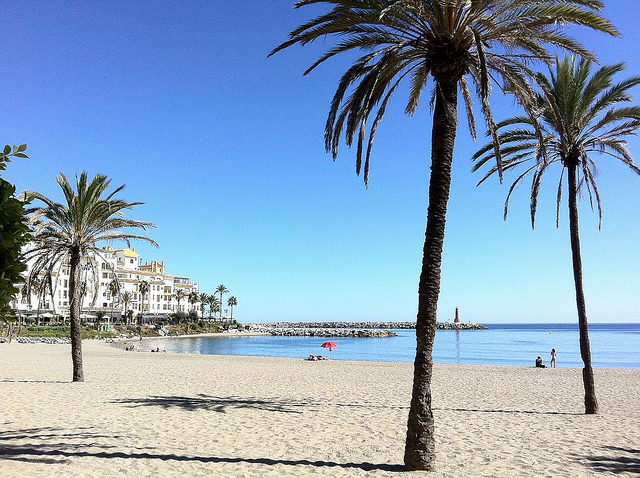 This infamous beach and resort (and beach club, and brand name, etc, etc) is a good eight-and-a-half miles from a town now associated with almost vulgar displays of wealth and bling. Nikki obviously has elements of that, too (it’s the only beach on this list to have its own website packed full of glamorous event listings, for example), but it’s also a stunning stretch of coast known for its clear waters. A day-trip to Nikki requires a bit of extra outlay, as you can imagine – but it’s worth experiencing once if you’re in the area. Top tip: unless you’re feeling particularly loaded, bring your own sun-lounger. A day’s worth of tanning on the white leather ones on the raised decking area can set you back anywhere up to 300 euros.

Some of the Coasta del Sol’s best swimming and sunbathing is to be had on the beautiful beaches in the municipality of Mijas, named after one of Málaga’s most iconic whitewashed towns. The longest and most popular of these is Calahonda, a two-and-a-half mile stretch of perfect yellow sand and deep blue sea that ends up close to the infamous Nikki beach in Marbella (see above). The urbanization of Calahonda itself is a popular destination for expats, who are drawn to its beaches and its superb location almost exactly halfway between Marbella and Fuengirola – a party town known among Mijas locals as “Fuengi.” 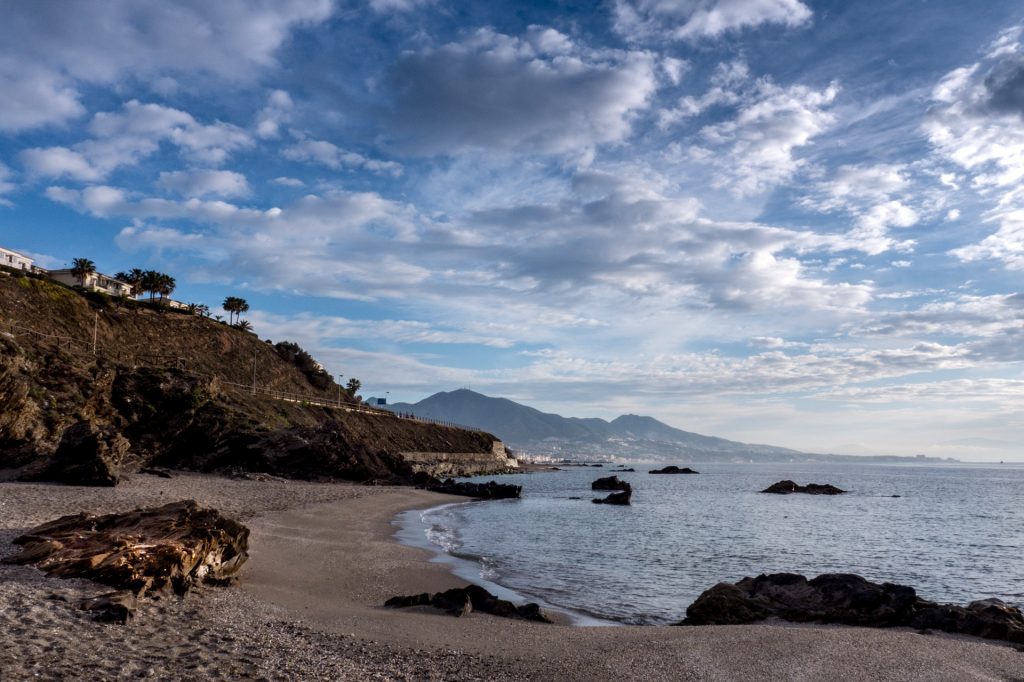 A package-holiday haven to rival the notorious Benidorm, Torremolinos wouldn’t be sought out by a traveler looking to experience authentic Andalusia. But for beaches it’s one of the best spots in Málaga province. Its six main beaches are now all connected by a recently-renovated four-and-a-half mile promenade, lined with palm trees and boasting exceptional views of the coast and the rugged landscape inland. Playa de Bajondillo is closest to Torremolinos itself and can become very busy, but heading westwards along the promenade brings you to more tranquil areas close to the charming old fishing village of La Carihuela.

Given that large sections of Andalusia’s stunning coast are now dominated by high-rise hotels, “English” pubs and massive resorts, Playa de Bolonia has survived amazingly well. This immaculate, white-sanded beach gives onto some of the most alluringly-turquoise waters in Cadiz and backs onto the Bolonia Dune, a much-visited attraction in its own right. One of the best beaches in Andalusia for those wanting to escape the tourism racket that has taken over much of the southern Spanish coast. 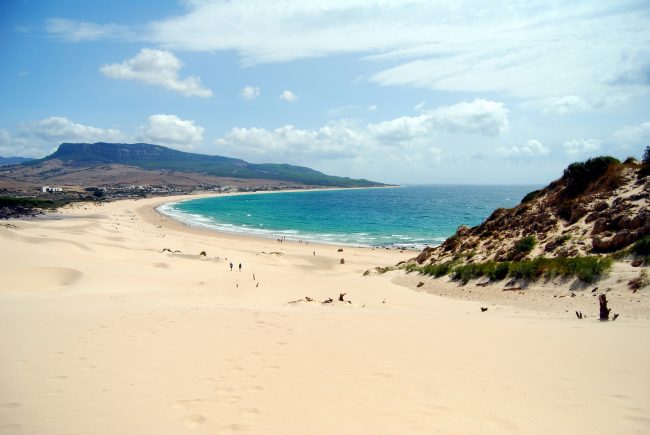 And finally, for those who like lounging around on the beach in nothing but their birthday suits, Marbella’s Playa Cabopino is a must-visit. About half way between Marbella and Fuengirola and a world away from the often-tacky excesses of those two tourist hotspots, Capobino has a stretch of sand that is solely for nudists. Situated as it is close to the Artrola Dunes, there is no shortage of humbling landscape to admire here either – but your attention will in all likelihood be focused elsewhere.