The Most Beautiful and Interesting Buildings in Menorca 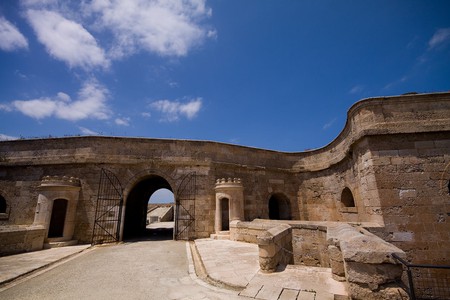 Although a small island, thanks to its rich and varied history Menorca certainly outpunches its weight when it comes to impressive architecture. Numerous constructions referencing military conquests, religious orders and foreign empires have been built through the ages, preserving the island’s cultural heritage in stone. Here we round up the best of Menorca’s eye-catching architectural gems.

This peaceful, pretty and partly whitewashed sanctuary sits at the top of Toro Mountain, which at almost 400 metres is the highest point on Menorca. Since the return of Christianity on the island in the 13th century when the Christians drove out the Moors, the sanctuary has been an important site for pilgrimages and spiritual gatherings. It is open to the public, but still inhabited by Franciscan nuns who offer days of religious reflection and a chance to stay overnight – well worth the visit, as the views are exceptional. 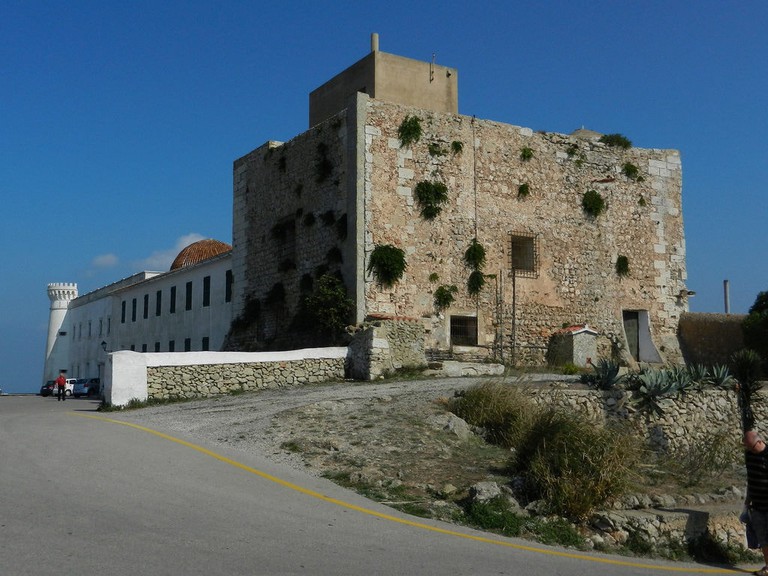 Cathedral, Mosque
Facebook
Email
Twitter
Pinterest
Copy link
Share
Map View
Built by order of King Alfonso III, the Cathedral of Menorca in Ciutadella is considered the island’s most well-preserved example of a Gothic-style building. Made of only one chamber and some auxiliary chapels, it was built between 1300 and 1365 on the site of an old mosque. The building was sacked and desecrated by invading armies up until as recently as the Spanish Civil War in 1936. Shortly thereafter, it was restored to the superb state and style you find it in today.
Open In Google Maps
8 Carrer de Ca'l Bisbe, Ciutadella de Menorca, Illes Balears, 7760, Spain
+34971380343
Visit Website
Give us feedback 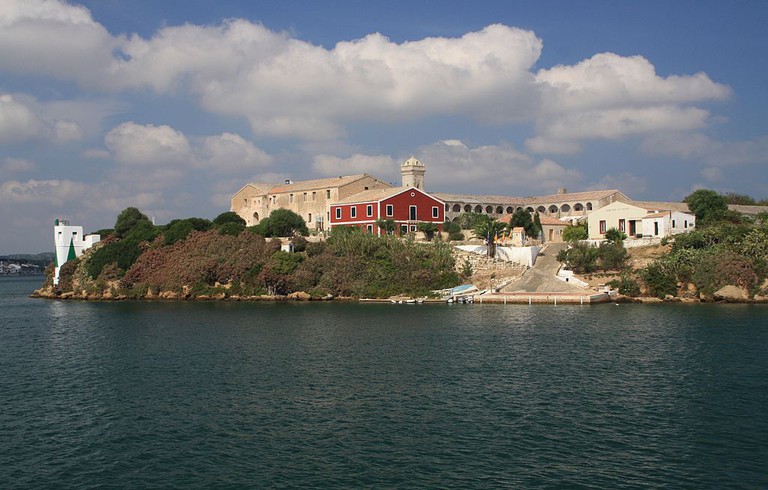 King's Island | © Dreizung / Wikimedia Commons
Arrive in Port of Mahón by boat and you can’t miss King Island, or Illa del Rei, a small islet half way into the port. And dominating the island is the 18th-century military hospital – a handsome, two-storey building with a central tower and large courtyard enclosed on three sides. The hospital largely looked after casualties from the British Navy, though it was also used for victims of the yellow fever epidemic in 1821 and wounded French soldiers in the taking of Algiers in 1830. In 1964, all patients were diverted to Mahón Hospital, due to the difficulty of getting the patients to the island, and the hospital was closed. Visitors, however, can still take the boat over and explore the wonderful building, its gardens, and the ruins of a 6th-century basilica.
Open In Google Maps
Diseminado Illa del Rei, Maó-Mahón, Islas Baleares, 7700, Spain
+34609161662
Visit Website
Give us feedback 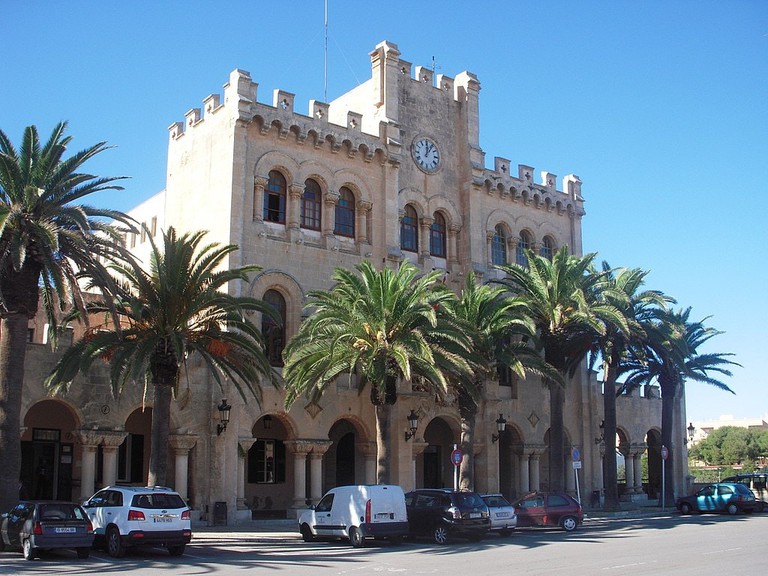 Town hall of Ciutadella | © Maria Hdez. / WikiMedia Commons
Located in Plaza del Borne, this particularly striking town hall building was formerly the palace of an Arab governor as well as a Royal Palace under King Alfonso III and again a governor’s palace under the British before finally being ceded to the city council in 1865. After much restructuring, it was inaugurated in 1925 as a municipal centre for the city. Evidence of its former characteristics can be found on the ground floor, and in the solid, defensive wall structure on which it is built.
Open In Google Maps
15 Plaça des Born, Ciutadella de Menorca, Illes Balears, 7760, Spain
+34971381050
Visit Website
Give us feedback 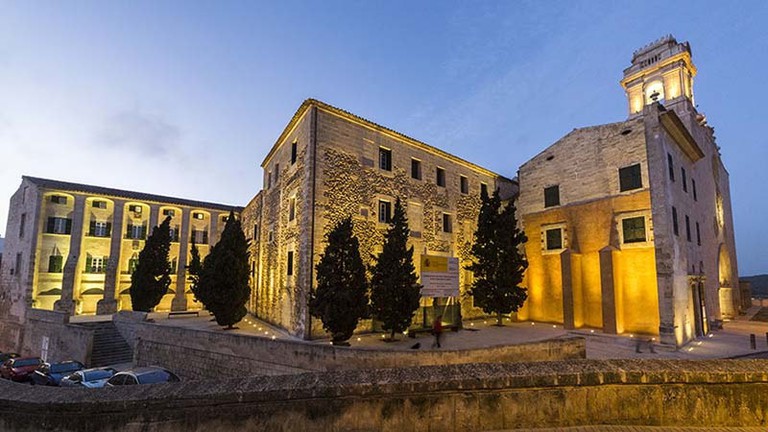 The Museum of Menorca | © Tònia.Marti / Wikimedia Commons
The Museum of Menorca is as impressive for its historical contents as the wonderful building in which they are housed. Occupying a former 17th-century Franciscan convent set in the heart of Mahón, the three storeys of Baroque architecture are a magnificent place to explore. The arches and cloisters on the ground floor, as well as the arch and rose windows above the chapel entrance, are reminders of the building’s former occupation.
Open In Google Maps
Pla des Monestir, Maó, Illes Balears, 7701, Spain
+34971350955
Visit Website
Give us feedback 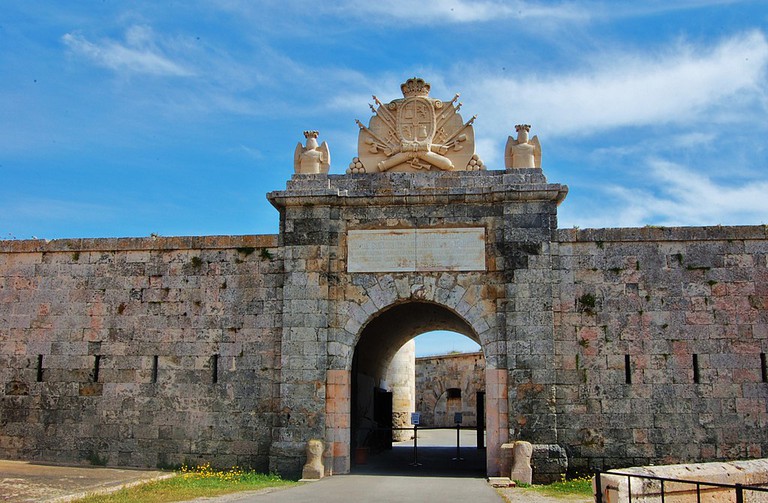 La Mola Fort | © Maria Rosa Ferre / Wikimedia Commons
The La Mola peninsula sits at the north of the entrance of Port of Mahón, a historically important position to defend the city and port from invasion. The British started but didn’t complete their planned construction of a fort, which left the Spanish to design and complete the building works. After three stalled construction projects, the La Mola Fort you see today was finally completed in 1875 (but modern artillery had by then made the building’s design obsolete). In 1896, the building was renovated to house modern batteries and cannons, some of which you can still see today as you walk around the gun rooms. It also played an defensive role in WWII with two guns at the highest point of the fort, and it remained in military hands until the 1990s. An important landmark in Menorca’s naval history and a must for military history buffs.
Open In Google Maps
s/n Carretera de la Mola, Maó-Mahón, Islas Baleares, 7700, Spain
+34971364040
Visit Website
Give us feedback

Natural Feature
Facebook
Email
Twitter
Pinterest
Copy link
Share
Map View
One kilometre outside of Ciutadella is an area of sandstone quarries known as Ses Pedreres de s’Hostal. Abandoned in 1994, an association called Lithica decided to make something of this beautiful area with the addition of walkways through the quarries, a stone labyrinth and some lovely verdant gardens. The amazing shapes carved into the stone are evidence of industrial quarrying as well as in earlier times when the stone would have been extracted by hand. The dramatic shapes and geometry of the place are genuinely mesmerising.
Open In Google Maps
km. 1 Camí Vell, Ciutadella de Menorca, Illes Balears, 7769, Spain
+34971481578
Visit Website
Give us feedback
Give us feedback