The Most Amazing Buildings in Bilbao

Maman by Louise Bourgeois | Courtesy of the Guggenheim Museum Bilbao
The Basque city of Bilbao is particularly well known for its avant-garde contemporary designs and fascinating architecture, especially as it is home to the Guggenheim Museum Bilbao. However, this is not the only amazing building in the city; come with us on a tour to see some of Bilbao’s most spectacular churches, museums, hotels and even train stations.

Museum, Building
Bilbao’s Guggenheim Museum is the most emblematic building in the city, towering above the river like a undulating titanium ship. Designed by the Canadian-American architect Frank Gehry, it was inaugurated in 1997. Today, it’s one of the world’s best modern art museums, showcasing art work from the 20th century to the modern day. Artists featured in the museum include Jeff Koons, Anish Kapoor and Louise Bourgeois.
Looks like it's closed Hours or services may be impacted due to Covid-19
More Info
Open In Google Maps
2 Abandoibarra Etorbidea, Bilbo, Euskadi, 48009, Spain
+34944359080
View menu
Visit website
Visit Facebook page
Send an Email
Give us feedback

Opera House, Theater
Teatro Arriaga Bilbao | Teatro Arriaga Bilbao
Bilbao’s main theatre was inspired by the Palais Garnier opera house in Paris, and was designed by the architect Joaquín Rucoba. It was inaugurated in 1890, but was only named Teatro Arriaga in 1902, after the musician Juan Crisóstomo Arriaga – known as the Hispanic Mozart. Arriaga composed his first opera at the age of 13 and sadly died of tuberculosis, aged just 20.
More Info
Open In Google Maps
1 Arriaga Plaza, Bilbo, Euskadi, 48005, Spain
+34944792036
View menu
Visit website
Visit Facebook page
Send an Email
Give us feedback

Museum
Museum of Fine Arts of Bilbao, Bilbo
The second most important art museum in Bilbao after the Guggenheim, the Museo Bellas Artes (Fine Arts Museum) comprises the façade of the old museum, founded in 1908, with a newer museum made of metal and glass, built in 2001. The museum’s collection features over 7,000 pieces dating from the 12th century to the modern day.
More Info
Open In Google Maps
2 Museo Plaza, Bilbo, Euskadi, 48009, Spain
+34944396060
View menu
Visit website
Visit Facebook page
Send an Email
Give us feedback

Cathedral, Building
Bilbao Catedral de Santiago | © Zarateman / Wikimedia Commons
Bilbao’s main cathedral, the Catedral de Santiago is a must-see and is in fact the city’s oldest building. Built on the site of an old hermitage dating back to the times of Jacobean pilgrims, it’s Gothic in style and was constructed around the 14th century, although the façade was redesigned later in the 19th century.
More Info
Open In Google Maps
1 Done Jakue Plazatxoa, Bilbo, Euskadi, 48005, Spain
+34944153627
View menu
Visit website
Visit Facebook page
Send an Email
Give us feedback

A huge culture and leisure centre, the Azkuna Zentroa, or Alhóndiga Bilbao as it is also known, is another example of how the city of Bilbao is constantly fusing together the old and the new. A former wine storage warehouse, it was redesigned by the famous French designer Philippe Starck into a modern masterpiece. It is seemingly held up by various uniquely created columns. 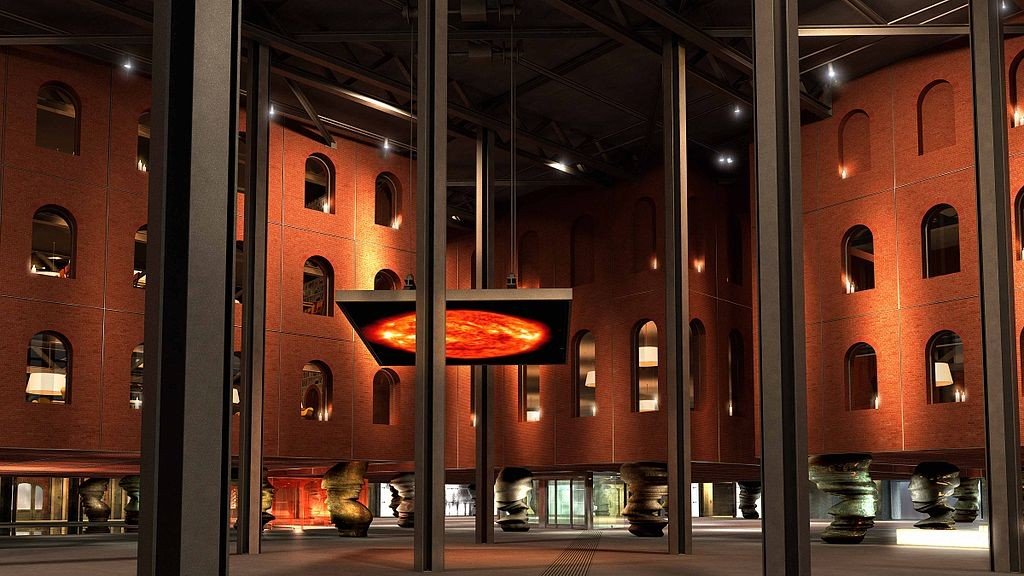 At first, the Abando train station may look like any other train station in the world, but head inside and you’ll find a huge, impressive stained glass window. The scene depicts the Basilica of Begoña, the bridge of San Antón, as well as the steel industry and Basque rural sports. 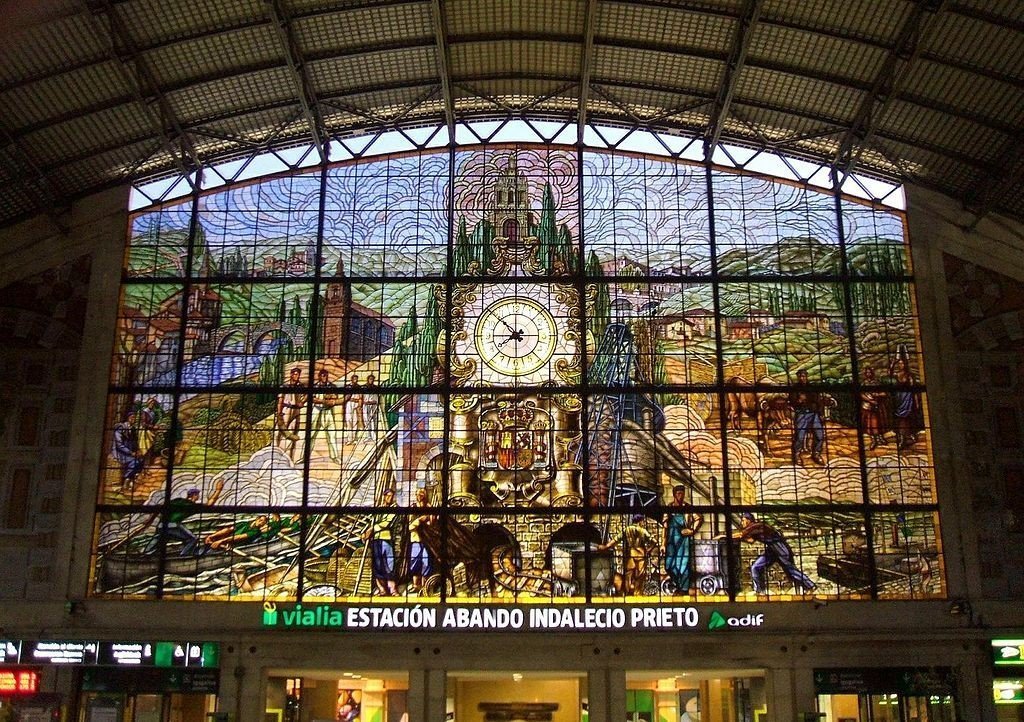 Church
Basilica de Begoña, Bilbao | © Alfa.Alfa / Wikimedia Commons
Built on the site where it is said that the Virgin Mary appeared in the 16th century, the Basilica de Begoña is without a doubt one of the most spectacular and striking buildings in the city. The church is mainly Gothic, however various architectural styles have been added over the years. The basilica is still visited today by many religious pilgrims.
More Info
Open In Google Maps
38 Begoñako Andra Maria Kalea, Bilbo, Euskadi, 48006, Spain
+34944127091
View menu
Visit website
Visit Facebook page
Send an Email
Give us feedback

Museum
Gran Hotel Domine, Bilbao | © Naotake Murayama / Wikimedia Commons
Located in front of the celebrated Guggenheim Museum, the Gran Hotel Domine is a work of art in itself. Having opened in 2002, its façade is made from metallic panels, which reflect the colours of Jeff Koons’ famous sculpture Puppy, covered in brightly coloured flowers. Inside, however, is even more impressive, with its open-plan central atrium, dominated by a large stone tower. The hotel was designed by the famous artist, illustrator and designer Javier Mariscal.
More Info
Open In Google Maps
61 Mazarredo Zumarkalea, Bilbo, Euskadi, 48009, Spain
+34944253300
View menu
Visit website
Visit Facebook page
Send an Email
Give us feedback
Book with our partner and we will earn a small commission.
Give us feedback