The History Of The Telefèric De Montjuïc In 1 Minute

The Telefèric de Montjuïc is a gondola lift situated on the slopes of Montjuïc hill in Barcelona, amongst some of the city’s most popular sights and landmarks. Visitors can use the lift to access Montjuïc’s many beautiful parks and gardens, as well the historic Montjuïc Castle at the summit of the hill.

Montjuïc hill in Barcelona is home to some of the city’s most popular museums, landmarks and outdoors areas. These include the Fundació Joan Miró, the National Museum of Catalan Art (MNAC), the Greek Gardens with their outdoor amphitheatre and the Montjuïc Castle. Telefèric de Monjuïc is a popular option for those wanting to combine their trip to these exciting sites with an opportunity to enjoy a unique view of the city. The lift was originally opened in 1970 as a replacement to part of the Telefèric del Port which runs from Montjuïc hill to the Barceloneta neighbourhood, crossing Port Vell harbour. Between the years 2004 and 2007 the lift was completely shut in order to enable important work designed to increase the lift’s capacity, it was at that time that the previously open cars were replaced with modern closed cabins instead. 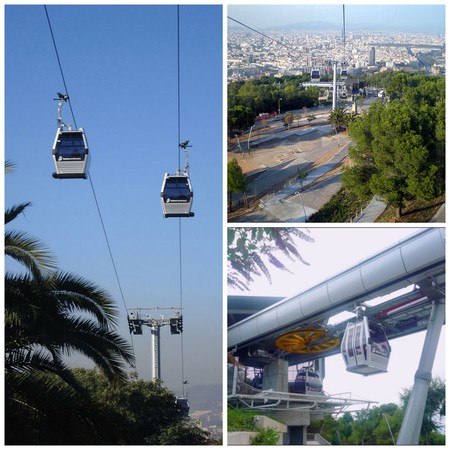 The gondola lift is 752 meters long and climbs a total of nearly 85 meters in altitude, at a speed of 5 meters per second. Passengers enter closed cabins resembling those used in ski resorts, two of which are equipped for access by wheel-chair users. There are three stations in total at which the Telefèric de Montjuïc stops: first is the ‘Parc de Montjuïc‘ station, from which passengers can access the Montjuïc Funicular. Next is the ‘Mirador‘ station, at which the cable car only stops on its way down the hill and from which passengers can access the Telefèric del Port via a short walk across Montjuïc to continue their journey down to Barceloneta. Finally, the highest station is the ‘Castell‘ or ‘Castle’ station from which guests can easily access the emblematic Montjuïc Castle.