The History Of The Port Vell Telefèric In 1 Minute

An important part of Barcelona’s iconic city landscape, the Port Vell Tramway or Teleferico del Puerto in Spanish and Telefèric del Port in Catalan, is an aerial tramway which runs from the Barceloneta neighbourhood of Barcelona to the top of Montjuïc hill. It is one of the best places from which to enjoy the breathtaking panorama of Barcelona and at the top of many visitors’ list of things to do will discovering the city.

Like many of Barcelona’s most iconic landmarks, the Teleferico del Puerto was built in anticipation of the 1929 International Exhibition of Barcelona, a large international fair which drew thousands of visitors to the city. The project was given to Air Rail San Sebastian-Miramar, S.A. and overseen by Juan Rodriguez Roda. However, the size of the project was underestimated and sadly the Teleferico was not completed in time for the International Exhibition, opening to the public 2 years later in 1931. 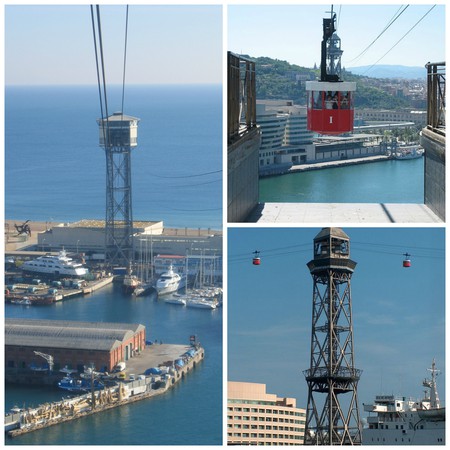 The Teleferico del Puerto starts from the Miramar station, located on the slopes of Montjuïc hill. It then travels across to the first of two towers, known as the Torre Jaume I, named after King Jaume I of Aragon. Located in the middle of the Port Vell harbour, it is 107 meters high and until 1966 it was the world’s highest aerial lift pylon. The Teleferico then continues its descent to the second tower and arrival station, known as the Torre Sant Sebastià. The tower measures 78 metres in height and is located towards the tip of the Barceloneta pier. At the top of the tower there is a restaurant called the Torre de Alta Mar, popular with visitors to the city for its breathtaking views of the city. Visitors access the restaurant and the top of the tower via an elevator.

During the the Spanish Civil War, the Teleferico del Puerto fell into disuse; the cabins were badly damaged and at one point the local authorities discussed the possibility of dismantling the construction altogether. One of the surviving cabins was preserved and transported to the aerial tramway of Montserrat mountain known as Aeri de Montserrat. However, one of the engineers working on the original project succeeded in reopening the Teleferico gradually throughout the 1960s. Sadly, after he passed away the project once again fell into commercial failure and in 1996 the project was nearly condemned to closure once again. The local council’s decision to regenerate the Port Vell area overturned the decision and after some renovation the Teleferico del Puerto opened its doors once again in 2000.