The History Of The Mirador De Colom In 1 Minute

Situated at the bottom of Barcelona’s iconic ‘La Rambla‘ street, across from the waterfront of the Port Vell, the Mirador de Colom is a monument erected in the memory of Christopher Columbus and his visit to Barcelona after his first voyage to the ‘new continent’.

The Mirador de Colom was constructed for the Barcelona Universal Exhibition of 1888 but plans for the monument were initially proposed as early as 1856 by a local known as Antoni Fages i Ferrer. However he was unsuccessful in his drive to gather the funding and approval required for its erection, and it wasn’t until 1881 that the local authorities finally approved the construction of the monument. The design was selected through a competition in which only Spanish artists could enter. The winner was a Catalan, Gaietà Buigas i Monravà. The building commemorates Christopher Columbus’s first voyage to America, after which he returned to Europe and travelled to Barcelona to give news of his voyage to King Ferdinand V and Queen Isabella I. 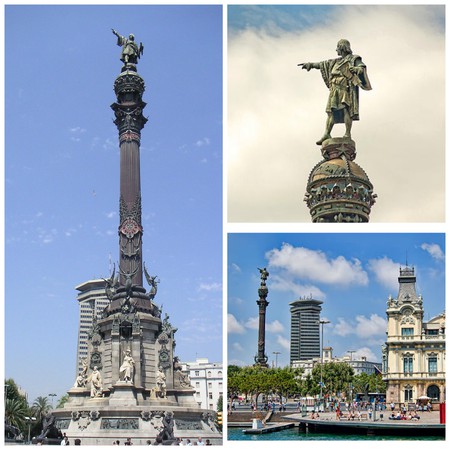 The monument is 60m tall and consists of a base, plinth, pedestal, and at the very top, a bronze statue of Christopher Columbus himself. The statue is said to depict Columbus pointing with his right hand towards New York and the new world he had explored. However somewhat controversially the statue is actually pointing south-east, and it is believed that this was done so that Columbus would appear to be pointing in the direction of the sea (located to the south-east of where the statue is placed) as opposed to inland. The monument is in fact also a viewing gallery which members of the public can access via a lift located inside the column, making the monument an ideal spot to discover the city from above.