The History Of The Buen Retiro Park In 1 Minute

The Buen Retiro Park, or simply El Retiro, is one of the biggest parks in Madrid. The name, translated into English, means ‘Park of the Pleasant Retreat’. Historically, it belonged to the Spanish Monarchy before it was turned into a public space in the late 19th century. Although located right in the city centre, its large size and intricate alleys shaded by century-old trees offer the perfect setting for escaping the hectic city life. Spreading on its 350 acres, El Retiro is a popular spot for locals looking for a place to unwind and practice sports.

The first step towards building El Retiro was taken in the 17th century when the Count-Duke of Olivares donated a part of his land to King Philip IV. Olivares was then determined to build a villa on the premises, to please the King. The spot proved to be an excellent choice, as it was surrounded by trees and was, at the time, slightly at the outskirts of the city. The construction of the park itself was commissioned ten years later by the very same Count-Duke, designed by garden designer Cosimo Lotti. The pond, ‘Estanque del Retiro’, became an important feature of the design along with other elements of El Retiro: the chapels and the wide pathways together with some of its exquisite sculptures. At the time, the park hosted many plays and operas for the royals and for their guests, and was said to be ‘The world art wonder of the time’. El Retiro is considered to be among the very last works of Renaissance style in Spain. 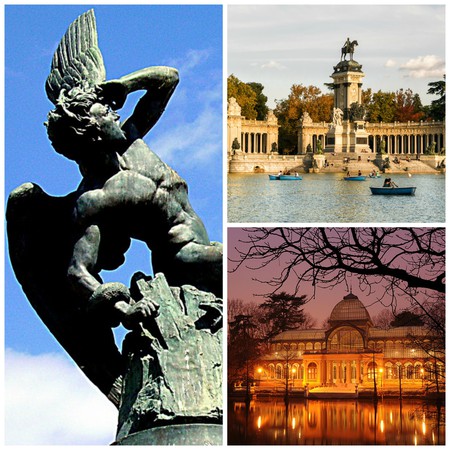 El Retiro has hosted several international exhibitions since it was made open to the public in the 19th century. Several features, monuments and landmarks have been built over the centuries, including the great statue of the King Alfonso XII, the famous Crystal Palace designed by architect Ricardo Velázquez Bosco, the Fountain of the Fallen Angel, and the Paseo de la Argentina – an impressive ‘statue walkway’ decorated with royal sculptures of kings built around 1750.

Today, the park hosts several public events and activities, including an annual book fair, concerts and puppet shows for children. El Retiro also provides an area for exercising, different sports courts and rental of rowing boats by the pond. The park is open for public all year round from 7 am until 10 pm. In the summer time, the opening hours are extended until midnight.