The History Of Plaça D'Espanya In 1 Minute 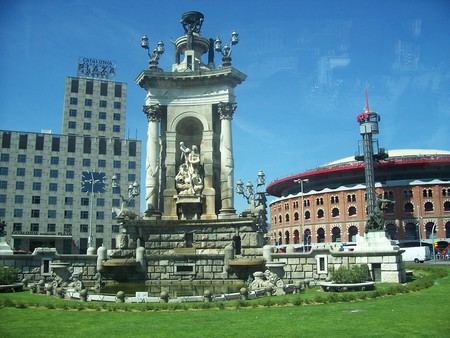 One of Barcelona’s most important squares, Plaça d’Espanya is located at the bottom of Montjuïc hill. It is a junction for many of the city’s largest transport axes including Avenida Parallel, Gran Via de les Corts Catalanes and Carrer de la Creu Coberta. Easily recognizable by its many notable architectural landmarks, it is the second-largest square in Spain, covering a total surface of 34,000 square meters.

The Plaça d’Espanya was built ahead of the 1929 Universal Exhibition of Barcelona, an important event that had a significant impact on the city’s urban landscape and general infrastructure, with many works being carried out to accommodate visitors and improve the city’s overall appearance. The plans for the square were designed by Josep Puig i Cadafalch and Guillem Busquets and finalized by Antoni Darder. The main feature of the square is the central fountain designed by Josep Maria Jujol, featuring ornamental statues designed by Miguel Blay and the brothers Miquel and Llucià Oslé. The statues are meant to represent the three main rivers that cross the Iberian peninsula: the Ebro, the Guadalquivir and the Tajo. Above the main body of the fountain are three columns bearing statues representing various figures associated with themes of religion, heroism and art. 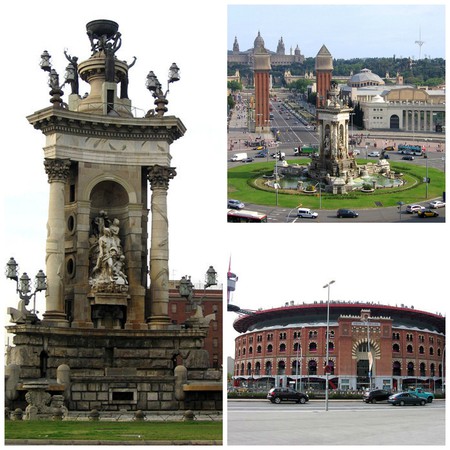 Another iconic feature of the Plaça d’Espanya are the two towers designed by Ramon Reventós – towers that are reminiscent of the bell towers of San Marcos in Venice. These two towers mark the entrance to the Avenida Reina María Cristina, which leads from Plaça d’Espanya to the Plaça de Carles Buïgas, where the popular Magic Fountain is located, known for its entertaining animations of light and music. Other notable landmarks around Plaça d’Espanya include the old bull ring-turned-shopping center known as ‘las Arenas,’ recognizable for its round shape and Neo-Mudejar design, inspired by Moorish architecture.