The History Of Bellesguard In 1 Minute

Bellesguard, also known as Casa Figueres, is a modernist manor house located in the north-west part of the city in the district of Sarrià-Sant Gervasi. Bellesguard was designed by the famous modernist Catalan architect Antoni Gaudí between 1900 and 1909. It was built on the grounds where the former country residence of Martin, the Count of Barcelona and the King of Aragon, was located. Gaudí designed the manor house by drawing inspiration from the medieval architecture used in the design of the original, 15th-century country residence. After the King of Aragon died, the residence was inherited by his widow. When she died, the estate exchanged several hands up until 1900, when Jaume Figueres purchased it.

Mr.Figueres passed away before the house was ready and unfortunately never had the chance to live in it, as Gaudí took a lot of time designing the details of Casa Figueres – details that nowadays make the house so unique. When Bellesguard was sold to the Guillera family in 1944, it was transformed into a hospital and continued to serve as one up until 1974, when the Guilleras decided to move in. For the first time the house served the original purpose envisioned by Gaudí – a home. 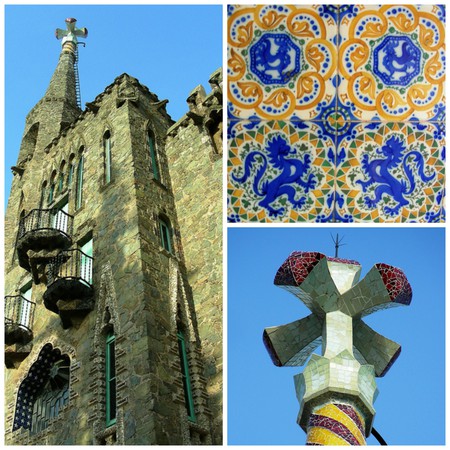 For about 30 years, the gardens of Bellesguard have been open to the public – a privilege granted by the Guillera family who recognised the special architectural value of their home and offer people the chance to take a closer look at the exterior design by Gaudí. In 2013, parts of the interior of Casa Figueres were also opened to the public, partly due to the manor’s architectural value but also to raise funds to renovate certain parts of the house. As the interior part of the house well demonstrates, Gaudí’s modernistic vision differs quite a bit from the more Gothic exterior, making Bellesguard an interesting architectural visit and also a great reason to explore Sarrià-Sant Gervasi.