The History Of Barcelona's Greek Theatre In 1 Minute

Located on the slopes of Montjuïc hill, among its many relaxing parks and gardens is the Teatre Grec, or Greek Theatre. The Teatre Grec is an open-air amphitheatre which serves as the main location for the Grec Festival, taking place in Barcelona each year. Despite its name, the theatre was in fact built in the 20th century and owes only its design to the Ancient Greeks whose name it carries.

Like many of Barcelona’s most iconic landmarks, the Greek Theatre was built as part of the project of urban renewal ahead of the 1929 Barcelona International Exposition. This large, international fair was an opportunity for the city of Barcelona to display its technological and artistic progress and much of the city’s infrastructure was upgraded and improved for the occasion. The Theatre was designed by the architects Ramon Reventós and Nicolau Maria Rubió i Tudurí, who were inspired by the Ancient Greek amphitheatres, and especially that of the small Greek town of Epidauro. The theatre is 460 metres squared, able to seat 1900 people and is located within the grounds of the Jardines Grec, or Greek Gardens, which were designed by Jean-Claude Nicolas Forestier between 1917 and 1924. 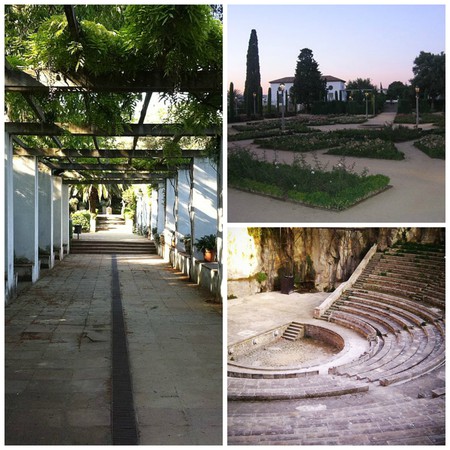 Although the theatre opened in the late 1920s, throughout the Spanish Civil War it remained unused; the last show to have been held there was the 1932 performance of Sophocles’ Electra. Throughout the 1950s, the theatre was used on several occasions for performances, including a Catalan performance of Shakespeare’s Julius Caesar. In the 1960s and 1970s, the theatre was once again largely unused until finally it was acquired by the local council who in 1976 organised the first edition of the Grec Festival, which has taken place each year in July and August since. The festival is an international event of theatre, dance music and circus performance which attracts thousands of spectators each year.