Bodega 1900 | © Ken Wang/Flickr
Located between Poble-Sec and the Raval, Sant-Antoni is a small area of Barcelona’s Eixample district. An up-and-coming neighborhood, home to one of the trendiest streets in Barcelona – Calle Parlament –, the area has been called the ‘yuccie’-ist neighbourhood in Barcelona. (That’s Young Urban Creatives (YUCcies) for those of you who aren’t familiar!) It also happens to be home to what is probably Barcelona’s most famous restaurant of the moment, Tickets Bar – guests frequently book three months in advance to get a table. Read on for our pick of the best tapas bars in Sant Antoni.
Tapas © Jessica Spengler/Flickr

Bar, Restaurant, Bodega, Mediterranean, European, Spanish, $$$
Plat Amanida | © Lolita Taperia
One of the most renowned restaurants in Sant Antoni, Els Sortidors is a popular venue, often buzzing with the sound of chatter and laughter. The venue captures something of the essence of a traditional bodega but with a distinctly modern twist which lends it a more sophisticated edge. The food menu is largely composed of a mixture of embutidos (local cured meats), cheeses, and preserved seafoods and vegetables such as marinated artichoke hearts or bonito del norte tuna (a delicacy in Spain). The stewed beef cheeks are worth a special mention, as is the Torta del Casar cheese. Be sure to order a vermouth from one of the large barrels or try one of the many specialty beers on tap or by the bottle.
More Info
Open In Google Maps
53 Carrer del Parlament, Barcelona, Catalunya, 8015, Spain
+34934411602
View menu
Visit website
Visit Facebook page
Send an Email
Give us feedback

A venue which takes the art of tapas seriously, Lolita’s serves some of the best cooked tapas in the area if not the city. The menu offers plenty to choose from with everything from olives and anchovies to classics such as patatas bravas, croquetas, or padron peppers to cooked specialties such as pig’s trotter and chickpea stew or rabbit with snails. The astounding flavor and quality of Lolita’s tapas are due to the great quality of produce used and the careful preparation of the dishes. The venue usually has a great buzz, with the large open kitchen taking central stage. A must-try for anyone eating out in the area. 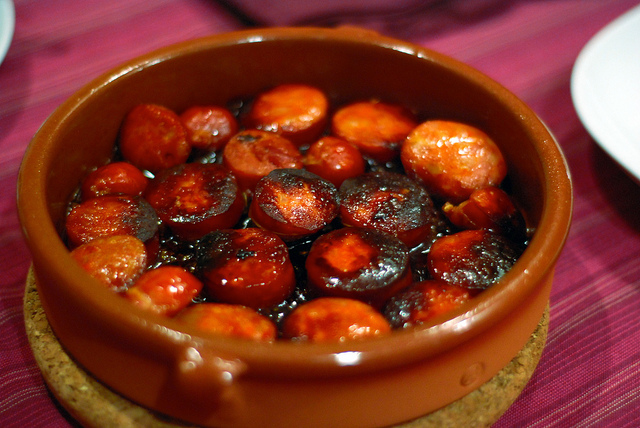 A lively local tapas bar, Bar Ramón is renowned for serving a wide selection of authentic home-made tapas, both cold and cooked, including the eponymous ‘Ramón’ chickpea stew, the local meat sausage botifarra with foie gras, or jabuguitos (a sort of chorizo) cooked in cider with blue cheese. The atmosphere is friendly and welcoming – the venue itself has something of the air of an old jazz club, with pictures of great jazz and blues musicians hanging on the walls along with the odd guitar. Bar Ramón is a great option for anyone looking for authentic local food with a little more ambiance than your average neighborhood tapas bar.

Bar, Restaurant, Bodega, Tapas, Wine, Beer, Fast Food, $$$
If there is one name associated with Barcelona’s gastronomic scene over and above all others it is without a doubt ‘Adrià,’ the surname of brothers Albert and Ferran, best known for their world famous restaurant El Bullí. Bodega 1900 is the latest project the brothers have undertaken in the Sant Antoni and Poble-Sec area, and it is located in front of Tickets Bar, Barcelona’s most sought-after table. The concept of Bodega 1900 is designed as a homage to the traditional bodega (or vermuteria) and includes a variety of preserves, marinades, and cured meats alongside grilled meats and vegetables.
Looks like it's closed Hours or services may be impacted due to Covid-19
More Info
Open In Google Maps
91 Carrer de Tamarit, Barcelona, Catalunya, 8015, Spain
+34933252659
View menu
Visit website
Visit Facebook page
Send an Email
Give us feedback

Cafe, Beer, Spanish
Octopus | © Kent Wang/Flickr
Mendl’s is a self-described ‘cafe’ specializing in croquetas. Expect to find classic recipes alongside original creations; chorizo, cambert, and honey, aubergine, tomato, and provolone cheese – or even foie gras and mushrooms. The croquetas are all homemade and cooked to order. If that wasn’t enough, Mendl’s Café is a spectacular tribute to the work of film director Wes Anderson, the name itself borrowed from the fictional baker in the The Grand Budapest Hotel.
More Info
Open In Google Maps
94 Carrer de Viladomat, Barcelona, Catalunya, 8015, Spain
View menu
Visit website
Visit Facebook page
Send an Email
Give us feedback

Located in the middle of the trendy Calle Parlament, Pa i Trago (‘bread and drink’ in Catalan) is anything but that. Instead it is a local’s favorite and a neighborhood staple, serving traditional tapas the way they have always been served; without fuss. Choose from a selection of cooked and cured local meats, as well as grilled seafood and fish and all the usual accompaniments – bread with tomato, Russian salad, and escalivada (marinated peppers and onions). A word of caution. Despite its name, the Catalan salad has very little to do with a typical green salad and consists instead mostly of cured meats – a treat for the more carnivorous of guests.