The Best Scuba Diving Sites Around the Balearic Islands 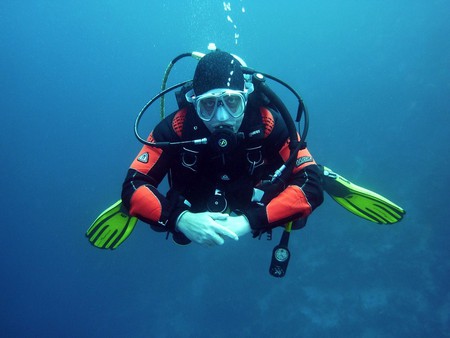 Abundant marine life, countless underwater caves and more than its fair share of shipwrecks, the Balearic Sea offers some surprisingly rich diving opportunities. Whether you’re newly certified or a seasoned diver, you’re sure to find the perfect dive site off one of its islands. Here’s a pick of the best spots to don your scuba gear and explore the underwater world around the Balearic Islands.

Located in the west of the Palma Bay is the tiny island of Isla del Sec, just off which is one of Mallorca’s most popular dive sites. The site features three possible dives, one gentle descending from five to 18 metres, plus two boat wrecks at 18 and 30 metres. Both wrecks have become home to an artificial reef and attract lots of marine life such as barracuda, moray eels, cuttlefish, grouper and octopi. The deeper dive is only for more advanced divers. Also look out for the tourist submarine that offers trips to the island.

This is one of several dive sites around the uninhabited islet and national park of Cabrera, located just south of Mallorca. It is situated next to the island’s port, and known as ‘grouper paradise’ – there’s one such fish in particular so friendly with divers they’ve named him Bernado. Visibility is also incredible (up to 40 metres) and more advanced divers can descend to a depth of 30 metres. Expect to see plenty of other big fish such as barracudas, as well as the occasional tuna. 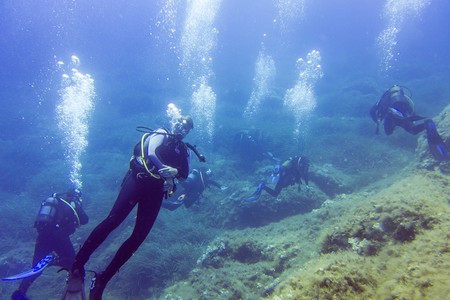 A well-known dive spot located off the northeast coast of Mallorca, the Cave of Jeroni (or Jeronimo) is really rather special. There’s a huge entrance that goes down to 18 metres and into a spectacular underwater cavern, into which after a short swim you can surface to an inner lake complete with abundance of stalactites. On the way out look out for moray eels or scorpionfish hiding in the rocks. It’s a dive for all levels, and expert free divers can allegedly access the cave with just a mask and snorkel – though this is certainly not recommended!

As the name suggests, this Bay of Palma dive site is a ship cemetery, and one featuring a particularly impressive wreck – a 40 metre-long cargo ship and the largest wreck in Mallorcan waters. Visibility is usually between 10 and 20 metres, and at 28 metres deep it’s only for advanced divers. Those with a wreck diving qualification can also enter the cargo ship’s wheelhouse and below the deck to the engine room.

La Catedral is so named for being the largest cavern on Menorca’s south coast (located off Cap d’en Font) and likely the largest on the whole island. The opening is enormous though the deepest point is 20 metres, making it accessible to divers of all levels. You can surface inside the cave, with enough light from the opening to make the array of overhead stalactites visible without torches.

Considered by many as the best cave dive in the Western Mediterranean, Pont d’En Gil is located on the far western tip of Menorca. It reaches 220 metres in length and is brimming with stalagmites and stalactites, and with an entrance only 12 metres down, it is accessible to all certified divers. Inside, you can surface throughout the dive to take in the spectacular cave ceiling, plus at the end of the cavern is a small beach.

Another wreck dive, but of epic proportions. Just minutes from the Port of Ibiza, the 142-metre Don Pedro became the Mediterranean’s largest shipwreck accessible to recreational divers when it sank in 2007. It starts at a depth of 26 metres (going as deep as 46 metres) and while you can’t access the inside, advanced certified divers can explore the ship’s wheel house and huge propellers. 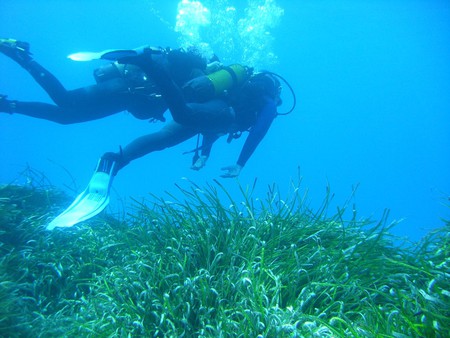 Located on in the north coast of the island, the Cave of Light or (La Cueva de La Luz) is another one where the clue is in the name. The dive first involves swimming through some fabulous rock formations – enormous columns created by erosion dubbed the Pillars of Hercules. Divers then enter the cave which is illuminated by a dramatic broad shaft of sunlight. Just be sure to avoid it on a cloudy day.

Known locally as La Plataforma, this dive site is located near the island of Es Pardell just northwest of Formentera. Resembling a sunken oil platform, it was in fact a fish factory that collapsed during a storm around 30 years ago. Dive boats moor to the top of the platform at 11 metres, and more advanced divers can reach 33 metres depth. It is also popular with sealife, often home to barracuda, conger eels and lobster. 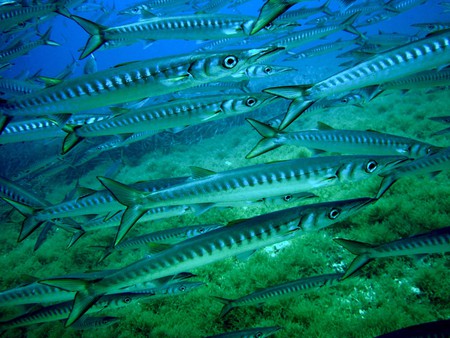 A battery of Balearic barracuda | © Dan Meineck / Flickr
Give us feedback