The Best Roman Ruins in Andalusia 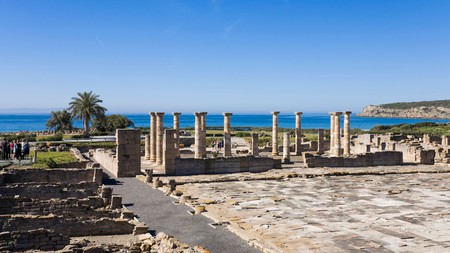 As part of a vast territory called Hispania, modern-day Spain was once one of the most prosperous parts of the Roman Empire. Many well-preserved ruins from this fascinating era are still with us, especially in the sun-baked region of Andalusia.

The Romans’ domination of Spain began in 206 BC with victory at the Battle of Ilipa, near present-day Seville. Thanks to virtuoso strategy from general Scipio Africanus, Roman forces ended the Carthaginian occupation of Spain and went on to rule the land for 700 years. Below, Culture Trip takes you on a tour of the most impressive Roman ruins in the southern region of Andalusia, from amphitheatres and temples to factories that produced some of the Empire’s most prized delicacies. 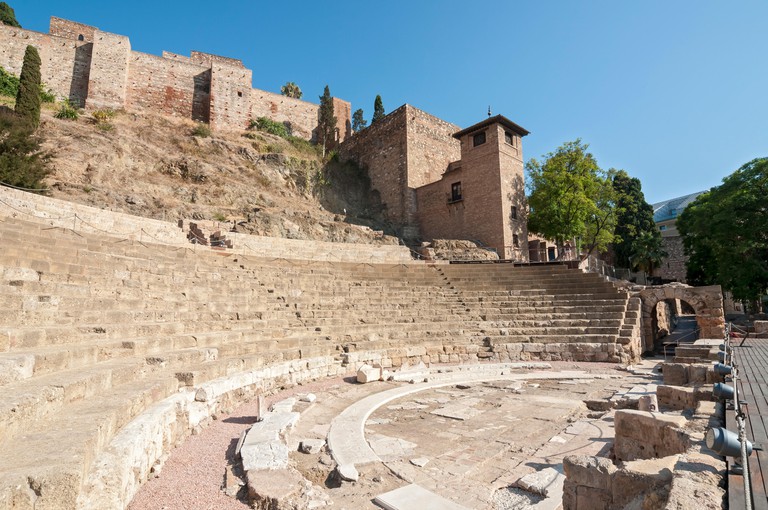 © imageBROKER / Alamy Stock Photo
Málaga’s Roman theatre is spectacularly located at the foot of the city’s Moorish citadel, or Alcazaba. It was discovered in 1951, during construction of a cultural centre that was subsequently demolished 40 years later, in order to display the teatro’s remains in all their glory. The structure dates from the 1st century AD, during the rule of Augustus (27 BC – AD 14), and was in use until the 3rd century. In the 8th century, the site was plundered by the Moors, who used the columns to reinforce the walls and foundations of their mighty Alcazaba. Attached is a small interpretation centre, and in summer the ruin reverts to its original purpose, with seating for over 200 spectators. 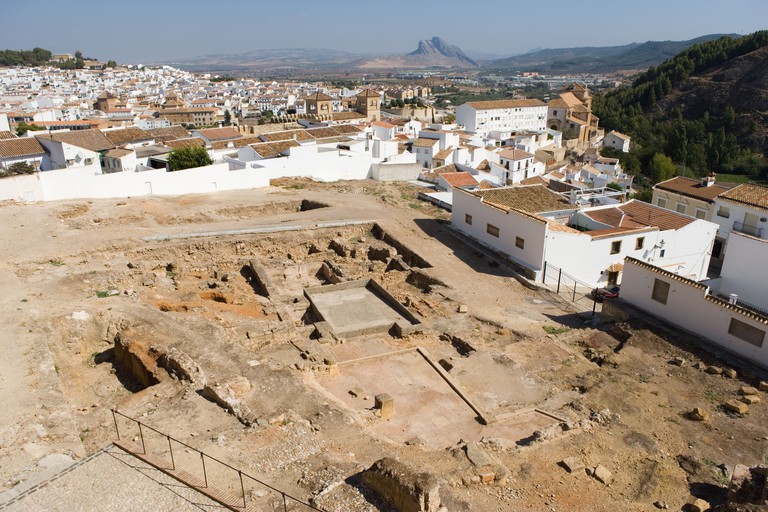 Antequera – called Antikaria by its Roman inhabitants – is a beautiful town located 53km (33mi) north of Málaga. Here, you can marvel at the well-preserved remains of the Santa Maria baths: discovered in 1988, they date from the 1st century AD and were in use until the 5th century. Clearly visible are the separate bathing rooms – which offered cold, warm and hot waters – and the dressing rooms, as well as some beautiful mosaics. The best overall view of the structure is from the Mirador Plaza de Santa María, from where you can also admire structures from Antequera’s Moorish and Christian epochs. On the other side of town, down by the train station, the remains of a Roman mansion discovered in 1998 are still being excavated. 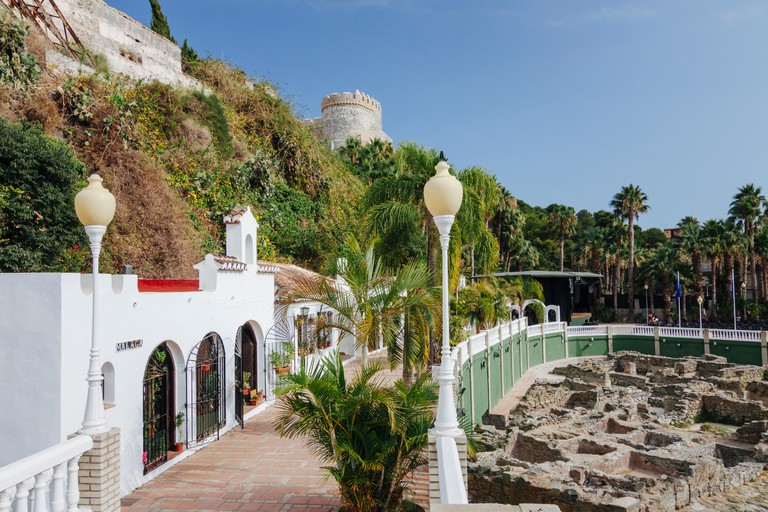 Situated on Granada’s coastline, Almuñécar prospered during the 1st century AD, when its salted fish was in demand all over the Roman Empire. The small, circular vats in which fillets of sturgeon and tuna were layered originally date from the 4th century BC, but were refined and extended centuries later. Their well-preserved remains can be seen in Majuelo Park. This factory also produced garum, a pungent Roman delicacy made with fish waste and intestines. Also of interest is Almuñécar’s Aqueduct, which was constructed in the 1st century BC and extended north of Torrecuevas. There are some remains in the centre, but the most impressive section is found in the Verde Valley, accessible via a circular walk from the town. 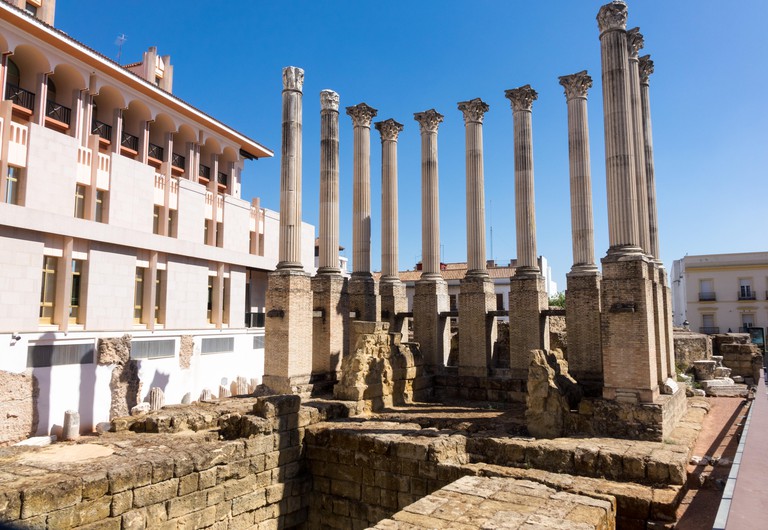 © Zoonar GmbH / Alamy Stock Photo
Córdoba’s Roman Temple was discovered in 1951, during expansion of the neighbouring City Hall. The structure was commenced under Augustus but only completed during the reign of Emperor Domitian (AD 81–96). As can be seen from the remaining columns, it was made almost entirely of expensive marble and is likely to have been one of the Empire’s architectural jewels. A 10-minute walk south of the temple is Córdoba’s iconic Roman bridge, built across the Guadalquivir in the 1st century BC as part of the Vía Augusta, which connected Rome with Cádiz. Most of the present structure dates from the Moors’ reconstruction in the 8th century, and only arches 14 and 15, as counted when walking away from the city, belong to the original bridge. 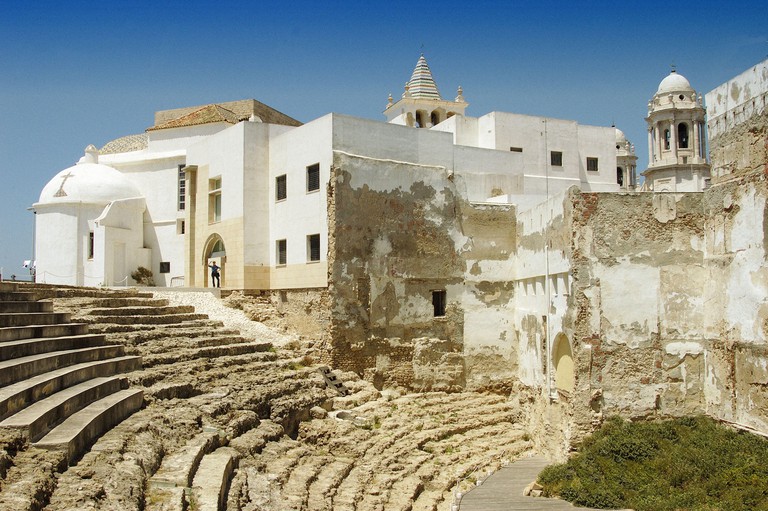 In around 70 BC, Lucius Cornelius Balbus “The Elder”, a close friend of Julius Caesar’s, decided to expand Gades, as the Romans called modern-day Cádiz. The centrepiece of his ambitious project was one of the Empire’s largest theatres, with seating for around 10,000 spectators – a structure that was subsequently used as the site for a fortress when the Moors arrived in 711. The Moorish Alcazaba was then reconstructed by Christian King Alfonso X “The Wise” when he reconquered Cádiz in 1262. Despite being discovered some 40 years ago, significant portions of the theatre are still buried under nearby houses, raising the tantalising prospect of further discoveries. 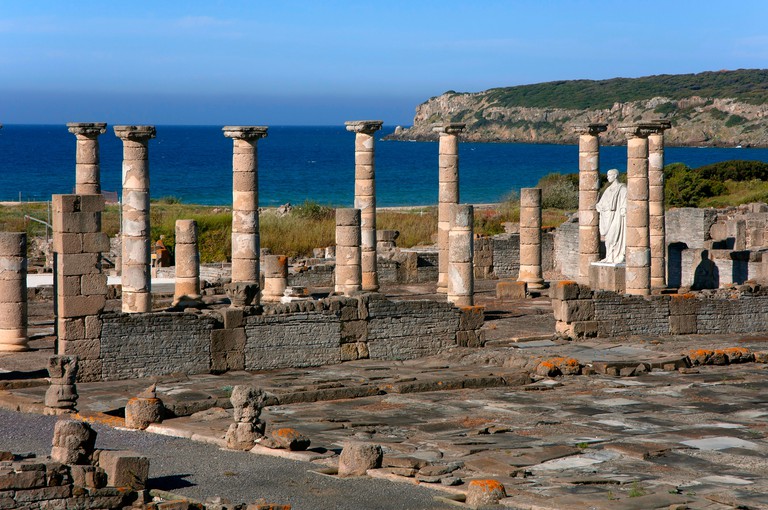 This splendid ruin is situated 14.5km (9mi) north of Tarifa in Cádiz province. The Roman town of Baelo Claudia’s central Forum dates from the end of the 2nd century BC, but the city complex was only completed under its namesake Claudius, who reigned from AD 41–54. Due to its location on the Strait of Gibraltar, Baelo Claudia was crucial to trade with nearby North Africa and generated most of its wealth from tuna fishing, fish salting and the production of garum. Its decline began with an earthquake in the mid-2nd century AD and was hastened thereafter by pirates’ occupation and looting. By 7 AD, the city was completely abandoned; nonetheless, magnificently preserved today are the remains of its temple, market, fish-salting facilities and theatre. 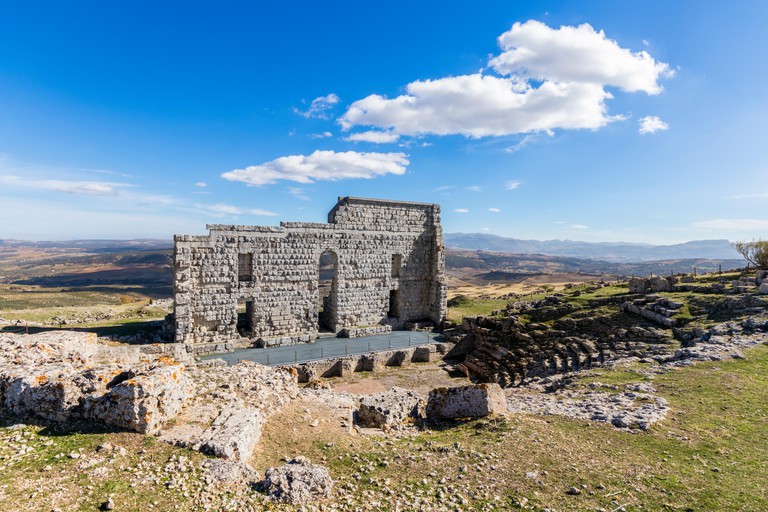 One of the best-preserved Roman theatres in Spain is found on a hilltop 19 kilometres (12 miles) northeast of Ronda, where a prosperous Roman settlement called Acinipo once stood. With a population of around 5,000, Acinipo thrived in the 1st century AD due to its proximity to Seville, Córdoba and the coast. Pass through the entrance gate, head up the hill and you’ll soon come to the impressive remains of a 2,000-capacity teatro, including tiered seats, a stage and the actors’ changing rooms. Also visible are remains of houses – some built with stones brought from the limestone wonderland of El Torcal, 100km (60mi) to the east – and the recently excavated baths. Evidence of Bronze Age settlements can also be seen on the same site. 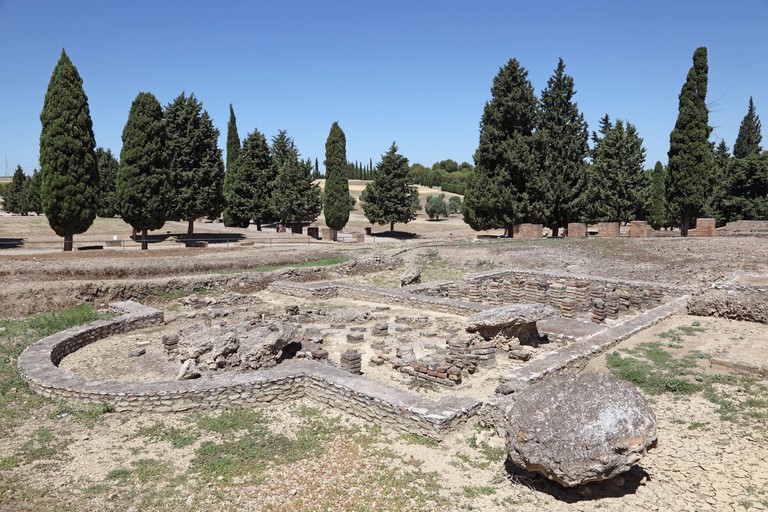 The remains of Italica, a city founded for Africanus’s conquering soldiers in AD 206, are located a 20-minute drive north of Seville. Italica is said to have been the birthplace of three Roman Emperors: Trajan, Hadrian and, according to some sources, Theodosius. Despite only having a population of about 8,000, the city boasted the the third-largest amphitheatre in the Empire, with seating for 25,000 spectators. Clearly visible today are the seating, the stage and, in the centre, a pit where animals such as bears and boars were kept for gladiatorial combat. Also well-preserved are cobbled streets, several large houses decorated with beautiful mosaics and a few arches of what was once a 40km-long (25mi) aqueduct. Scenes of Game of Thrones were filmed in Italica in 2016. 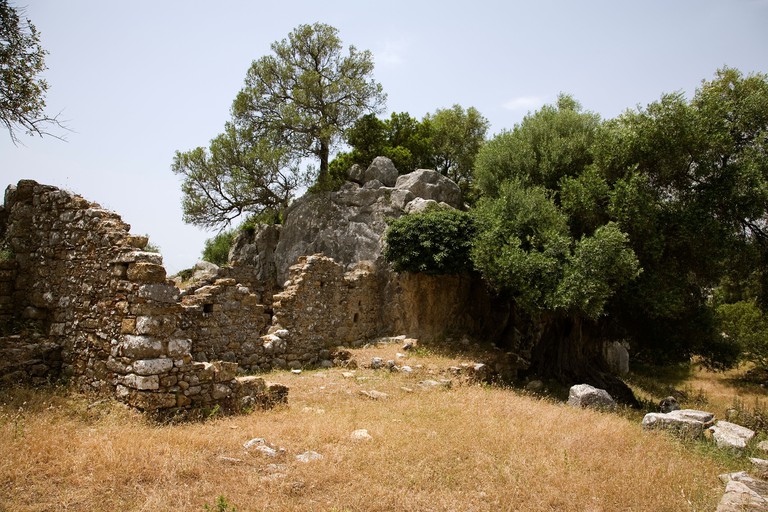 The remains of the Roman town of Ocuri are located deep in Cádiz’s Sierra de la Grazalema natural park, near the whitewashed village of Ubrique. They were discovered at the close of the 18th century by a local farmer, who subsequently performed much of the excavation himself. Although some recovered materials date the settlement to the 6th century BC, Ocuri is thought to have thrived as a strategically placed defensive city in the 2nd century AD. Its mausoleum is possibly the best-preserved such structure in Andalusia, boasting an intact ceiling, walls and niches for urns. Also of note are the ruins of the baths and the Forum, from which you can enjoy spectacular mountain views. Visits are only possible with guided tours, which run three times per day. 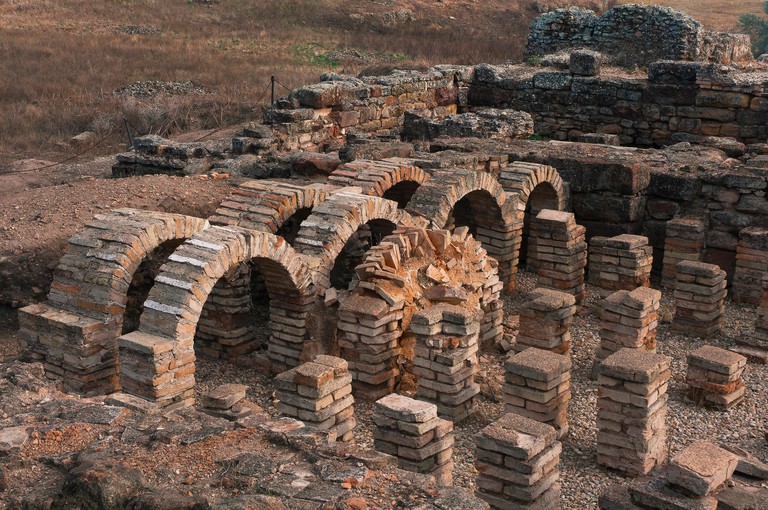 This vast complex of roads spanned the length and breadth of Hispania. It was built between the 2nd and 8th centuries BC under Emperor Augustus, who ordered the renovation of a network dating from the Roman Republic, and it stretched from Cádiz to Rome. During the 10th century, it was used by the Moors, who called it al-Racif. Today, much of the Vía Augusta is overlaid by motorways, but there are still stunning remains in Andalusia, where it follows the weaving course of the Guadalquivir. Especially well-preserved are the ruins of Cástulo in the province of Jaen and the stretch from Seville to Carmona, where you’ll find the magnificent Puerta de Sevilla, dating from 220BC, and a necropolis.