The Best Places To Skate In Barcelona

Barcelona has been unintentionally designed as a playground for skaters. Chris Gregorio, a skater from the U.S, traveled to Europe with his board to check out the skating scene for himself. Here are his top picks of places to skate in Barcelona.

The Museum of Contemporary Art Barcelona is by far the most recognizable place for skaters around the world. It all began in the late 90s, when the ‘MACBA Big Four’, was featured in a skate movie called ‘Misled Youth.’ The Big Four was a ledge with four stairs that were wide enough to do skating tricks on. Although things have changed a bit since then (it’s now the ‘Big Three’), many skaters, pros and amateurs alike, come from all over to join the scene. Next time you come to MACBA to admire the art within, don’t miss the exhibit right outside its doors.

If you don’t see people skateboarding at Sants Estació in Barcelona, then you might just be in the wrong place. With several granite benches and metal ledges to grind on, and even a sculpture that has a ramp molded into it, the place has been the setting of many skateboarding videos throughout the years. Sants is any skateboarder’s paradise, as it looks like something right out of a Tony Hawk video game. If you plan on skating here, make sure to get here soon: many of the benches and rails are starting to get worn out from all the activity.

The sculpture park of Montbau provides the ideal layout for showing off your skating skills. Although the shapes are a little awkward for a board, each sculpture has parts where you can grind or use as ramps. Because the park is so spread out, it’s easy to gain enough speed, or practice on the ground before attempting the sculptures. If you’re new at skating, these works of art may come off as a little intimidating, so make sure you judge them based on your abilities. Otherwise, you might find your board in need of a sculptor, too.

When you get off at the Fòrum stop on the Yellow Line towards the beach, you’ll see an area that was built for the ‘92 Summer Olympics. As you continue along, you will discover several surfaces you can skate on, from ledges, to steps, to even a giant brick wave that serves as a halfpipe. Moreover, the town figured it was best to install a little skatepark here as well, if you’d rather go there. Fòrum has everything, including awesome graffitied walls, and even a swimming pool you can jump into after working up a sweat.

Occupied by the young people of the city, Plaça Universitat is a great place to ride and meet other skaters. The plaza is not just another skating area, it’s also a place to socialize. Whether you choose to grind on the various ledges or just do some flat tricks, people will be watching you, so make sure you’re prepared. And keep your eyes open, as it can get crowded here. 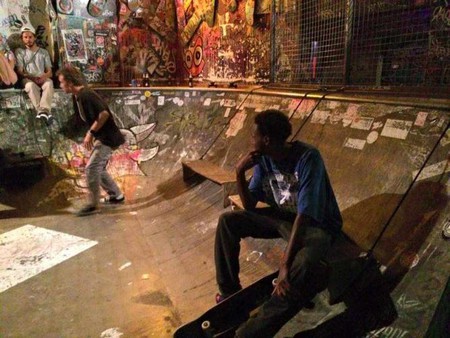 If you like a bit of an architectural challenge, then Parc Central de Nou Barris is the place. This area has intricate banks and giant wooden triangles sculpted into the ground, as well as structures that stick out from buildings. Depending on your level, this would be a great place to give yourself a chance to try something new and most likely more difficult. The area here is also quite pretty, so if you’d like to just come by and explore on your board, that’s an option too.

While anyone who has been to Barcelona will tell you that the port is a popular spot to go for a stroll, skaters will tell you that it’s a popular place to go for a skate. Port Vell is a wonderful place to watch the boats come in, sit on the boardwalk, eat some waffles, and just catch some rays. For skaters, there’s plenty of room to weave in and out of pedestrians, grind on ledges and benches, do some kickflips over stairs, or hop over rises in the pavement. 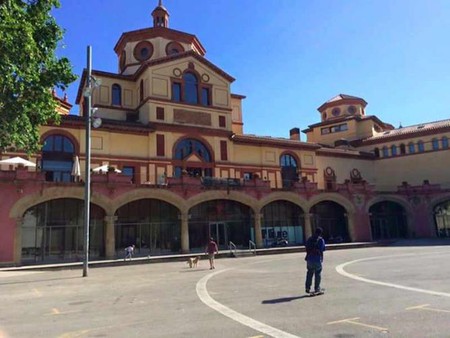 Although Barcelona itself is essentially a giant skatepark, the city has designated certain areas for skaters instead of the streets. Whether this is to try to stop skaters from taking over, or simply to accommodate the influx of skaters from all over, heading to one of these skateparks isn’t such a bad idea. If you’re not quite ready to have others see your moves out in public, then you can head to Mar Bella Skatepark, located near Parc Esportiu, or Port Olimpic Skatepark, near Nou Barris. Both of these are near the beach. The city is also always building new parks, so make sure to check out what’s going on when you come.

After returning home, Gregorio had a lot of positive things to say about his experience. ‘There are many open areas and plazas that are smooth, and have a number of obstacles that make it perfect for skateboarding and socializing, which are two things I love.’ Surely, anyone else would love it, too, which is why Barcelona has become one of the top places for skateboarders to travel to. However, Gregorio left us with a bit more advice. ‘There’s a lot of world out there, not only in Barcelona.’