The Best Places to Eat Tortilla in Córdoba, Spain

JGA, shutterstock
Tortilla de patata – an omelette bulked up with potatoes and onions – is one of Spain’s most famous dishes and is served in practically every bar and restaurant in Córdoba. The quality of this ubiquitous dish can vary hugely, though, so below we’ve brought together some of the best places to enjoy tortilla in this beautiful city, from the uber-traditional to the refreshingly-modern.

Bar, Spanish
Bar Santos does the biggest tortillas in the city | © gaelx/flickr
Bar Santos has a reputation for making the best and biggest tortillas in Córdoba. While many other bars could justifiably claim to be rivals on the first count, nowhere else makes them as big as Santos does. Proudly displayed in the bar’s windows, which directly face the eastern wall of the great Mosque-Cathedral, they look like fat yellow tyres. Given that not even the hungriest tourist could eat a whole one, you’re served a thick slice on a paper plate with a plastic fork, and the custom here is to enjoy it out on the street, with a beer or a wine, as you marvel at the Mezquita. Santos’ location on one of the city’s main thoroughfares mean it’s always packed, making for a great atmosphere as you tackle the largest slice of tortilla in Córdoba.
More Info
Open In Google Maps
3 Calle Magistral González Francés, Córdoba, Andalucía, 14003, Spain
+34957893220
View menu
Visit website
Visit Facebook page
Send an Email
Give us feedback

Situated just down the road from the opulent Palacio de Viana – the star attraction of Córdoba’s annual Feria de los Patios – is El Tercio Viejo, a tiny little bar that serves some of the best and cheapest tapas in the neighbourhood. There’s virtually no space inside, so customers quickly fill up the small outside terrace to enjoy tapas and cold beers whilst watching the world go by on the busy street that heads down to Viana. The tortilla here is just as good as you’d expect from a typically Cordoban joint and is likely to be some of the cheapest you’ll find in the city. Don’t leave without also trying a glass full of snails – Viejo’s signature snack.

Bar, Spanish
The old-school interior of Bar Santa Marina is a perfect environment for enjoying tortilla | Encar Novillo
This fantastic little bar is so old-school it doesn’t even appear when you put its name into Google Maps, but rest assured it does exist. Facing the gracefully ageing Santa Marina church in the heart of Córdoba’s old town, this place has been serving the neighrbourhood’s locals – who prop up the chrome bar owing to a complete absence of tables – for generations. Out of its tiny kitchen come all of the Spanish classics, including a mean tortilla, made entirely from scratch every day. It’s best enjoyed with a vermouth (a favourite tipple here) as you survey walls plastered with yellowing bullfight posters from the early 20th century and faded pictures of a weeping Virgin Mary. They really don’t make them like this anymore.
More Info
Open In Google Maps
1 Calle Mayor de Santa Marina, Córdoba, Andalucía, 14001, Spain
+34677261702
View menu
Visit website
Visit Facebook page
Send an Email
Give us feedback

Bar, Restaurant, Spanish, European, Mediterranean, $$$
“Everything was absolutely incredible”. You hear this a lot from people who have dined at Garum 2.1, a trendy gastrobar at the end of Calle San Fernando, one of the old town’s most buzzing streets. This is a place where you can enjoy Spanish classics such as tortilla and salmorejo – both of which are said to be amongst the best in the city – enlivened with modern, innovative additions and tweaks. Service is praised as highly as the food and Garum’s location in the old quarter near the riverbank means that it’s a perfect place to stop in between visiting Córdoba’s famous patios and its Mosque-Cathedral.
More Info
Open In Google Maps
122 Calle San Fernando, Córdoba, 14003, Spain
+34957487673
View menu
Visit website
Visit Facebook page
Send an Email
Give us feedback
Mon - Sun:
12:00 am

One of Córdoba’s most famous old restaurants, Bodegas Campos is a must-visit if you want to eat and drink with the locals in a typically Andalusian environment. A labyrinth of charming rooms, patios and corridors split over several levels, Campos serves traditional Andalusian dishes – including the ubiquitous tortilla – with flare and imagination. You can enjoy their homemade tortilla propped at the bar in the informal tavern or seated in the restaurant, but wherever you are you’ll receive excellent service. Accompany your food with a glass of their very own Montilla – the city’s favourite sweet wine – for a truly Cordoban gastronomic experience. The stewed bull’s tail, another southern Spanish classic, is also a must-try. 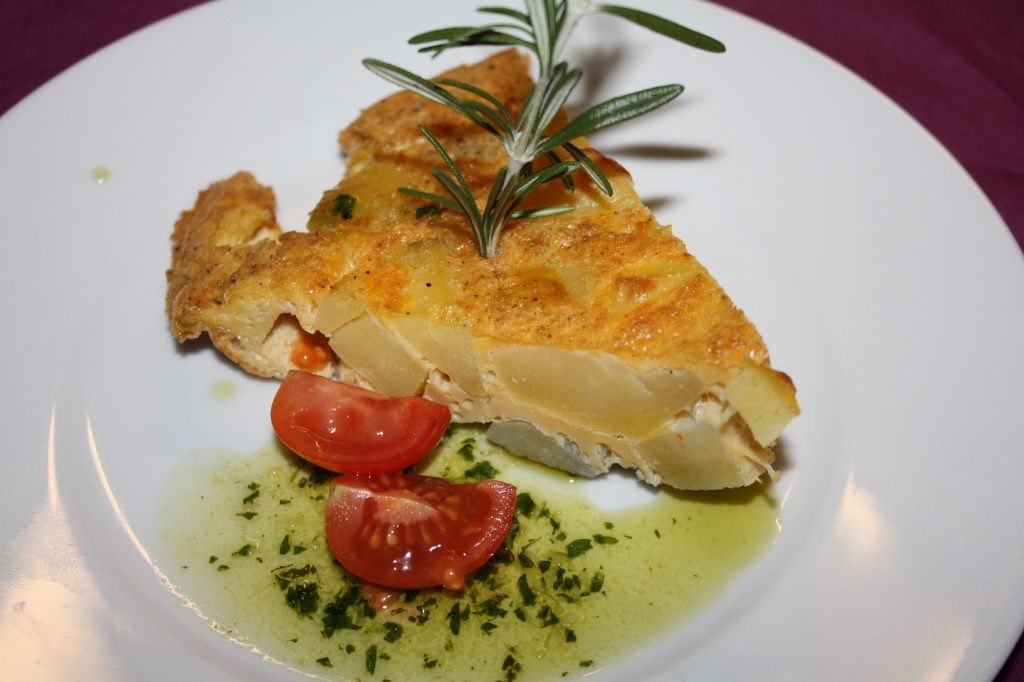 Garum 2.1 serves classics such as tortilla, but with a modern twist; unserekleinemaus, pixabay