The Best Places to Eat Tapas in Granada, Spain 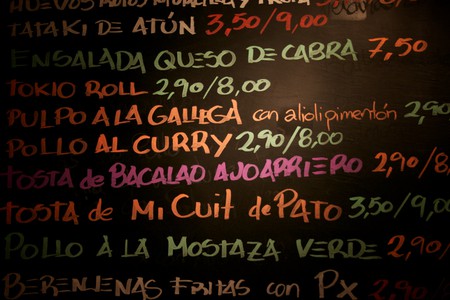 In Granada, for every glass of wine, soft drink or beer you order, you receive a free portion of tapas, meaning that a trip here is likely to be one of the cheapest you’ll ever make. The city is home to an abundance of bars and restaurants of wildly varying quality, but below we’ve put together the tapas joints in Granada that offer the very best of value, quality and ambience.

A household name for Granadinos of all generations, this famous old bar is a must for its jamons and chaotic atmosphere. The hams are exquisite – smoky, woody, slightly spicy – and are served in thin slivers on crusty bread, drizzled with rich olive oil. Elbow yourself a space at the bar, order a delicious vermouth – the locals’ drink of choice – and be entertained by the wizardry and speed of the waiters, who work beneath hanging legs of jamon and a giant bull’s head. This place is always packed with Spaniards enjoying voluble catch-ups, so put aside reserve and politeness and shout your order.

First-time visitors to Granada often laugh with disbelief when you tell them you can eat a decent lunch or dinner, with a drink, for about 3 euros. For definitive proof of such insanely low prices, head to “The Happy Whale” – a cheerful little tapas bar situated way off the tourist track near Granada’s bullring. This place is always busy with students, and you soon find out why: for three euros, you can order a pint of the local (and excellent) Alhambra beer and choose a tapas from their extensive menu. The homemade burgers are amazing: in most bars in Granada, you receive “mini-burgers” as a tapas, but here they’re straight-up burgers, as substantial as any you’d get as a main course. One of the little-known stars of Granada’s incredible tapas scene. 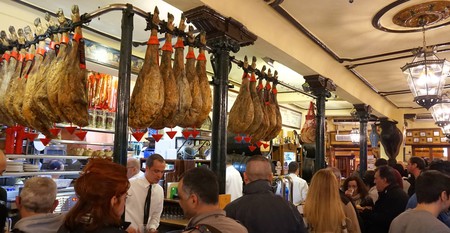 Hiding in a short alleyway off Plaza Nueva, Casa Julio has some of the most unpredictable opening hours in Granada. But if you do see it open you must duck in. The laconic yet charming proprietor will serve you, for example, a plate of fresh calamari, crispy on the outside and succulent on the inside, or a simple plate of cold meaty gambas with a wedge of lemon. The inside resembles a kiosk more than a bar, so most patrons stand around the four or five tall circular tables in the alleyway outside. Perched here, you can accompany some of Granada’s best fried fish with the excellent house wine or cold beer. If Julio decides to open, that is.

Situated on one of Albaicin’s prettiest streets, La Fragua offers meal-sized portions of classic tapas in a bohemian environment. The owner, constantly swigging from a bottle of Alhambra, is often at least half-cut and always (hic) very friendly. He personally chooses the bewildering selection of music played (Edith Piaf one minute, Nirvana the next) and to accompany what must be the cheapest glasses of wine in Granada – €1.60 a pop – you will be absolutely spoilt with tapas: stewed meat so tender it falls apart on your fork, delicious fried eggs and peppers, paella, huge pinchitos with patatas bravas – the list goes on. And don’t be put off by the hippies that hang about outside with their ravenous dogs: it’s all part of the charm. 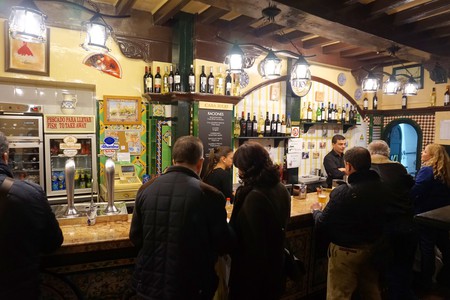 One of the smarter bars in central Granada, Los Manueles never disappoints with its meat tapas. Stewed pork cooked to perfection, spicy sausages served with chunks of fresh bread and a herby chicken roasted on the bone are just some of the treats on offer here. There are two Los Manueles restaurants just over the road from each other in the heart of old Granada, but the one just off Plaza Nueva (on Calle Reyes Católicos) has the best location and a small outside terrace that’s great for people-watching. You pay about 10 cents more for a beer or glass of wine here than in nearby bars, but given that you can eat dinner at Los Manueles for about 5 or 6 euros, it won’t be a problem.

There are now three branches of Los Diamantes in central Granada, including a recently-refurbished one on Plaza Nueva that is a favourite amongst tourists. For the original and best version of this fried-fish specialist though, you need to head to Calle Navas, a bar-packed street off Plaza Isabel la Catolica. Los Diamantes I, as it might be called, is so small that you have to yell your order from the doorway to make yourself heard above the jam of Granadinos – but that’s half the fun of visiting one of the most loved local bars in Granada. Though much more popular with tourists, the branch on Plaza Nueva is always busy with Spaniards too and is a great place from which to watch the world go by on Plaza Nueva – old Granada’s busiest square. 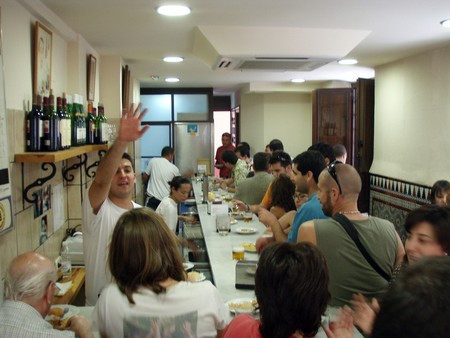 Situated a few doors down from La Fragua at the top of Albaicin, Reina Monica is unique in Granada for its massive buffet of pan-Mediterranean and Arabic tapas. With each drink you can choose three – yes, three – tapas from the pastas, vegetarian dishes, couscous, croque-monsieurs, moussaka, tortillas, bocadillos and carne en salsas (stews) that crowd the buffet-table. Well worth a visit if you’re after somewhere that offers more than just traditional Spanish fare at absolutely unbelievable prices. Incidentally, just next door is a little place the locals call The Magic Door, where everyone in Albaicin buys “medicinal herbs”. Apparently.

About halfway along the Camino del Sacromonte, when the views of the Darro valley and Alhambra suddenly open up, is a tiny bar set into a dappled white cave with a few tables and chairs outside (and, probably, a ginger cat dozing under their shadows). Pibe’s tapas is rustic, simple and delicious: hams and cheese on bread, Russian salad, slices of sweet tomato served only with salt and olive oil. You say you’ll just stop off for one at Pibe – and next thing you know, you check your watch and you’ve spent a whole afternoon on the enchanting terrace, enjoying the tapas, pondering the Alhambra and listening to the crickets and birds singing in the valley beneath. 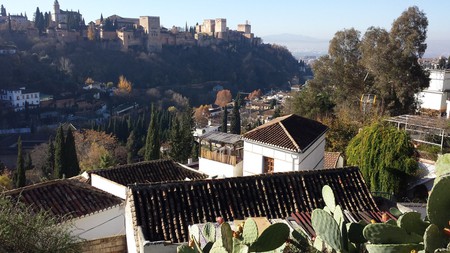 Views over the rooftops of Sacromonte and the Alhambra from Par Pibe; Encar Novillo
Give us feedback