The Best Museums in Mallorca, Spain

Museum of Mallorca | Leon Beckenham / © Culture Trip
Of all the Balearic Isles, it’s fair to say that Mallorca has had the most colourful history, from its first ancient civilisations, through numerous conquests and a steady streams of interesting characters who have made the island their home. To help explore and understand its rich and often turbulent past, there are numerous excellent museums. Here is a selection of the best.

The Museum of Mallorca (Museu de Mallorca) certainly seems like a good place to start your exploration of the island’s history. The relatively small museum itself occupies a beautiful 17th-century palace built on the foundations of one of the city’s oldest Moorish houses, and nestled in the middle of Palma Old Town. Exhibits go right back to the island’s first civilisations, with Talaiotic and Roman remains, followed by Moorish and Christian art, all complemented by a fine collection of artworks. While the history elements can be a little on the dry side (with limited English translations), just exploring the building itself is worth the modest entry fee.

Museum, Memorial, Historical Landmark, Archaeological site
Bellver Castle | © Cristian Bortes/Flickr
This museum is an located within the gothic Bellver Castle perched on a pine-covered hilltop overlooking Palma. For a reasonable fee you can enjoy not only the views of the city below, but learn about the history of the island itself, starting from the time when it was ruled by the Moors before the Christians conquered it in the late 13th century. You’ll learn about the rulers and relics from that era, and gain an understanding of the urban development of Palma as it grew beyond the old city walls, and the impact of tourism on the island in the 20th century. If you are visiting Mallorca for the first time, this is a great place to gain a well-rounded understanding of the island and its history up to the present.
More Info
Open In Google Maps
s/n Carrer Camilo José Cela, Palma, Illes Balears, 7014, Spain
+34971735065
View menu
Visit website
Visit Facebook page
Send an Email
Give us feedback

Standing beside Palma’s cathedral, just along the city wall in the Episcopal Palace, is the Diocese Museum. Housing over 200 religious artworks, it tells the history of Christianity in Mallorca from the 15th century to the present day. The collection is divided into seven sections: religious sculpture, archeology, modern ceramics, Séguier legacy, coins and religious art and literature. One outstanding object is a window and a model of the Trinity Chapel designed by the Catalan architect Antoni Gaudí. Don’t miss the small crocodile, Drac de Na Coca, which is embalmed and encased in the museum. Legend has it that the crocodile lived in the streets of Palma, near to the cathedral, terrorising inhabitants as it searched for victims to feed on. Who killed it and what is its importance to the city today? You’ll have to visit to find out.

Museum
La Granja Esporles Museum | © Courtesy of La Granja Esporles Museum
La Granja is a beautiful 17th-century country mansion just outside the pretty village of Esporles. Converted into a museum dedicated to the island’s crafts and traditional way of life, each room is packed out with well-maintained pieces from across the ages. You’ll find a room dedicated to some very painful-looking dentistry, and another filled with dolls and puppets hanging from the ceiling, while outside there’s an ikat fabric workshop, and on the ground floor a basketweaving room and an olive press as well as the parish dungeon, filled with terrifying torture equipment. If that is not your thing, head into the gardens or visit the animal menagerie, where the peacock might do a little dance for you.
More Info
Open In Google Maps
Km 1.5 Ctra Banyalbufar, Esporles, Illes Balears, 7190, Spain
+34971610032
View menu
Visit website
Visit Facebook page
Send an Email
Give us feedback

Museum
It stands to reason that one of the most famous Mallorcans of current times would have a museum, and it’s located just outside the city of Manacor, where he grew up. As a top-level athlete, Nadal encourages everyone to engage in sport, so the museum is not solely tennis-focussed. Inside, you will see highlights from his extensive career, the trophies and medals he has won from his many competition wins, as well as lots of sports equipment. And if that isn’t enough, it also has a super-modern experience room filled with simulators for tennis, cycling, rowing and F1 racing. For sports aficionados, and to familiarise yourself fully with the details of Nadal’s brilliant career, this is a great place to visit.
More Info
Open In Google Maps
Manacor, Illes Balears, 7500, Spain
+34971171683
View menu
Visit website
Visit Facebook page
Send an Email
Give us feedback

To many in England, the English poet, historical novelist and classicist Robert Graves put Deià on the map. He and his wife created an artistic community here, attracting an international bohemian set to the charming mountain village. Graves lived in a house called Ca n’Alluny – ‘the far house’ – which is on the way out of the village towards the town of Soller. He moved there in 1929 and live there first with partner Laura Riding, and then with his second wife Beryl and their three children, until his death in 1985. He is said to have written I, Claudius here in order to pay off the mortgage. The house has since been turned into a museum dedicated to his life and work, with much of the building remaining as it was in his lifetime.

Museum
Es Baluard | Es Baluard
This gallery-slash-museum is focussed on exhibiting modern and contemporary art and artists who are linked to the Balearic Islands, from the 20th century up until today. It has exhibited everything from drawing and sculpture, to painting, photography, video and installations from a wide range of artists including Picasso, Marina Abramovic, Magritte, Mirósp and Wilfredo Lam, to name very few. Its sleek contemporary architecture is fused into into the old city walls and is in one of the finest spots in Palma, overlooking the marina. Make the most of the restaurant and the outdoor bar – having a drink while the sun sets behind the mountains is a must.
More Info
Open In Google Maps
10 Plaça de la Porta de Santa Catalina, Palma, Illes Balears, 7012, Spain
+34971908200
View menu
Visit website
Visit Facebook page
Send an Email
Give us feedback

The Pueblo Español in Palma (handily en route to Bellver Castle) is Mallorca’s best place to visit if you like to feel as if you’ve stepped back in time. Completed in 1968, it is a collection of 18 buildings, 15 streets and 12 seats, all built in 72 different examples of Spanish architecture. You can to visit a replica of the Alhambra of Granada, a copy of El Greco’s house and Christ of the Lanterns, one of the most emblematic places in the city of Córdoba. Each building is built to scale and was designed using materials from the region it represents. It’s not really on most tourists’ radars, so you’ll be able to enjoy this faux-ancient enclave free of crowds.

Heading out of Palma towards the west, tucked away in a residential neighbourhood, is this foundation dedicated to the work of Joan Miró. Miró’s wife, Pilar, was from Mallorca and they moved here in 1956. Miró had the studio first – which has remained untouched since his death in 1983 – and then a few years later he bought the nearby Finca Son Boter. Both these spaces, along with a principal exhibition space, a sculpture garden and library, make up the foundation. 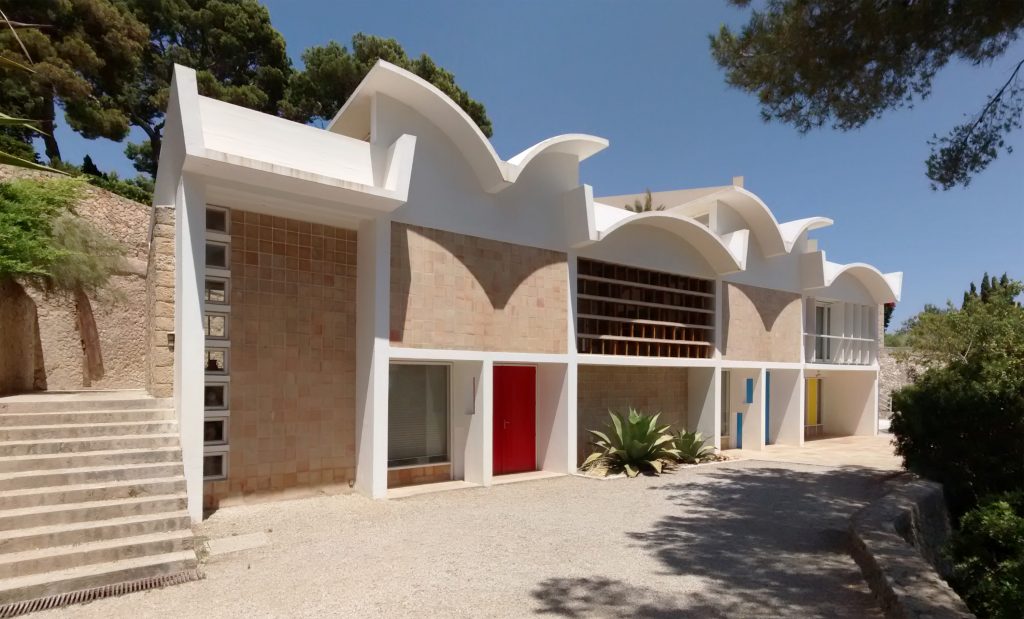 If you are interested in the Arabic history of the island, you definitely should take the 20-minute drive north of Palma to the Jardins de Alfabia – a country estate that was home to the Arabic Viceroy of Mallorca until the early 13th century. It is made up of a baroque-style house, surrounded by beautiful terraced gardens and fine examples of Arabian irrigation systems. You hear the trickling water wherever you are in the gardens, plus there’s a playful fountain footpath where visitors can cool down on a hot day. In the house you can see how the stable boys would have lived (under the house, along with the animals) as well as the formal rooms for entertaining important visitors. For real history fans, inside this building is El Llibre de ses Franqueses, a document granted in 1230 from the new King Jaume I to the Kingdom of Mallorca after the overthrow of the Moors, giving Mallorquins exemptions from compliance to rules that were set for other regions. There is also a pleasant shaded cafe in the gardens, as well as few goat and horse pens that are popular with younger guests. 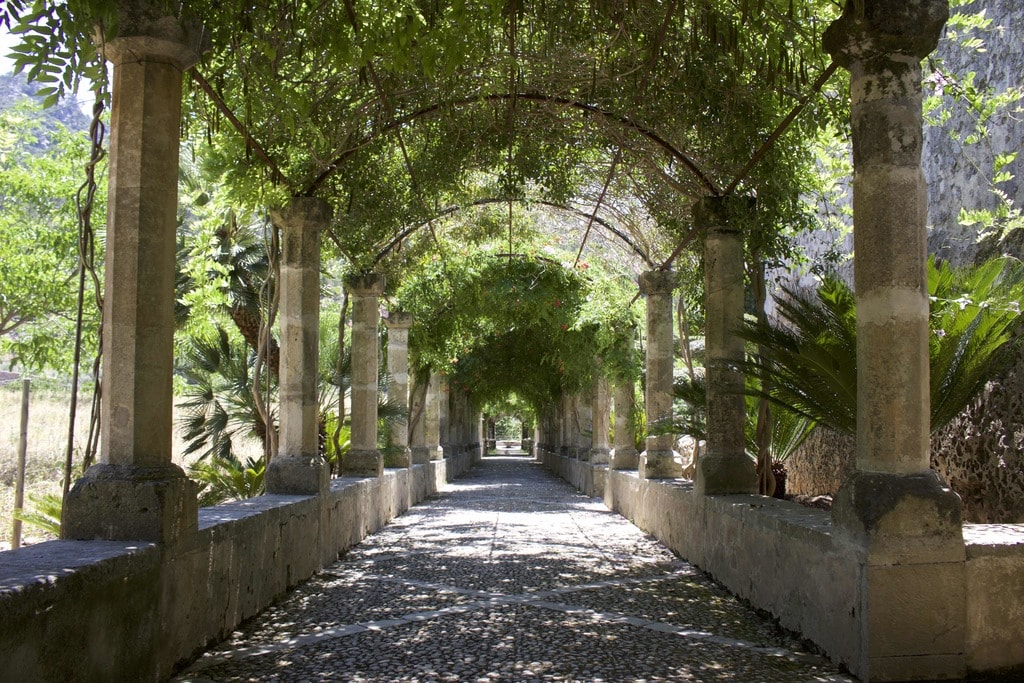