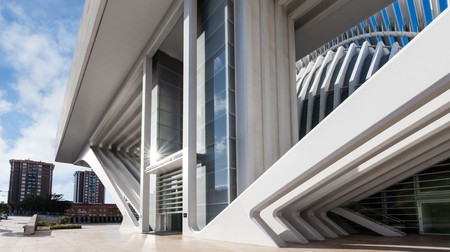 Oviedo, the capital of the Asturias region in northern Spain, is a richly historic, yet rather compact, city. Tucked among narrow lanes, the must-see sights include several remarkable churches, the Museum of Fine Arts and a medieval cathedral. But Oviedo also offers some lovely green spaces, plus great dining and nightlife that’s livelier than most. If you’re planning a visit and feeling flush, here are the best luxury hotels in Oviedo – they’re all bookable on Culture Trip. 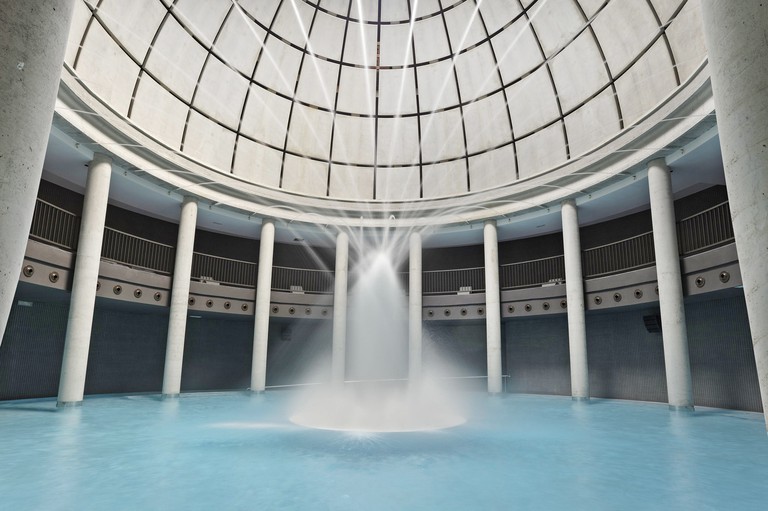 With spa facilities built around hot mineral springs, water-based wellness is naturally at the heart of Las Caldas Villa Termal. Part of the huge spa is also inspired by the domed Pantheon of Rome, while offering both indoor and outdoor thermal pools and a seemingly endless treatment menu. You can choose between plushly traditional or smarter modern accommodation, much of it offering views over the surrounding forested valley. Jump in a car, and you’re just 10 minutes from Oviedo old town. 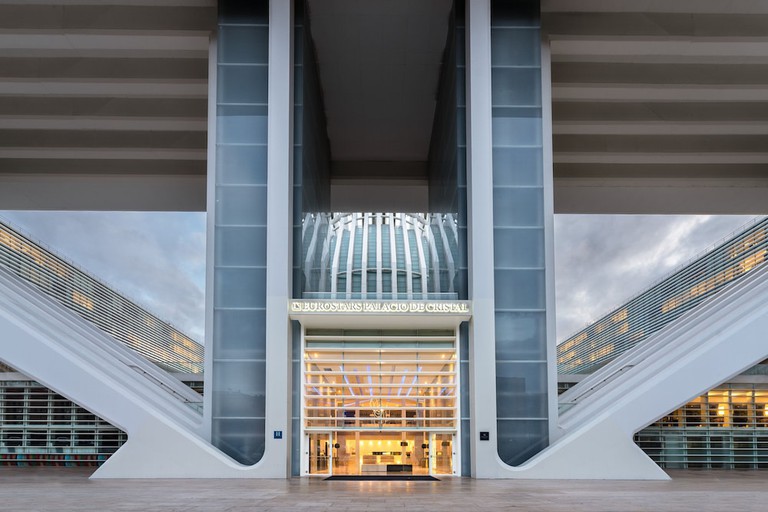 This spectacular design-led hotel is part of the Oviedo Exhibition & Conference Centre, the most impressive pieces of modern architecture in the city. Interiors are similarly striking, though dialed down a little in the rooms, which lean toward minimalist retro. Many add floor-to-ceiling windows with city vistas. There are fab views from the spa whirlpool tub, too. On-site dining includes an atmospheric bistro, while the numerous eating options of old town Oviedo are a short stroll away. 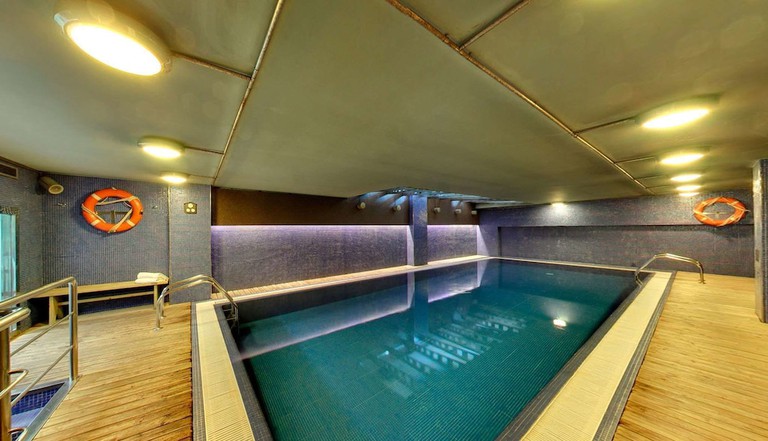 While located on the newer side of town, Hotel Silken Monumental Naranco is still within easy walking distance of the central Campo San Francisco park. It’s also one of the few city hotels with an indoor swimming pool, located underground together with a sauna and gym. Rooms come with big adjustable beds, and upgrades include perks such as bathrobes and Mount Naranco views. Head to the Restaurant El Monumental for traditional Asturian fare. 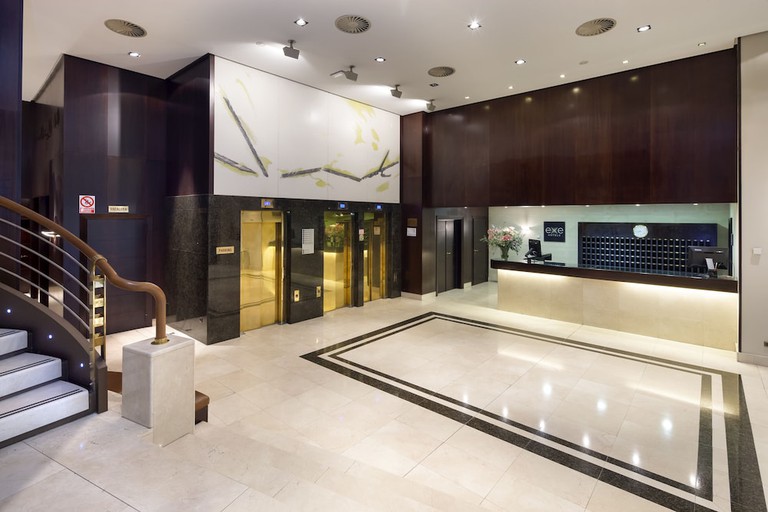 With a shimmering wave of mirrored glass, it’s hard to miss the Exe Oviedo Centro as you enter the city from the north. It’s also an easy stroll from the main train and bus stations, making it popular with business and leisure travellers. Rooms reflect this, with their cosy-yet-conservative decor; upgrade to a top-floor suite for perks that include hydromassage tubs and city-view terraces. Wake up to a complimentary breakfast buffet before a brisk walk into the old town, which is around 10 minutes on foot. 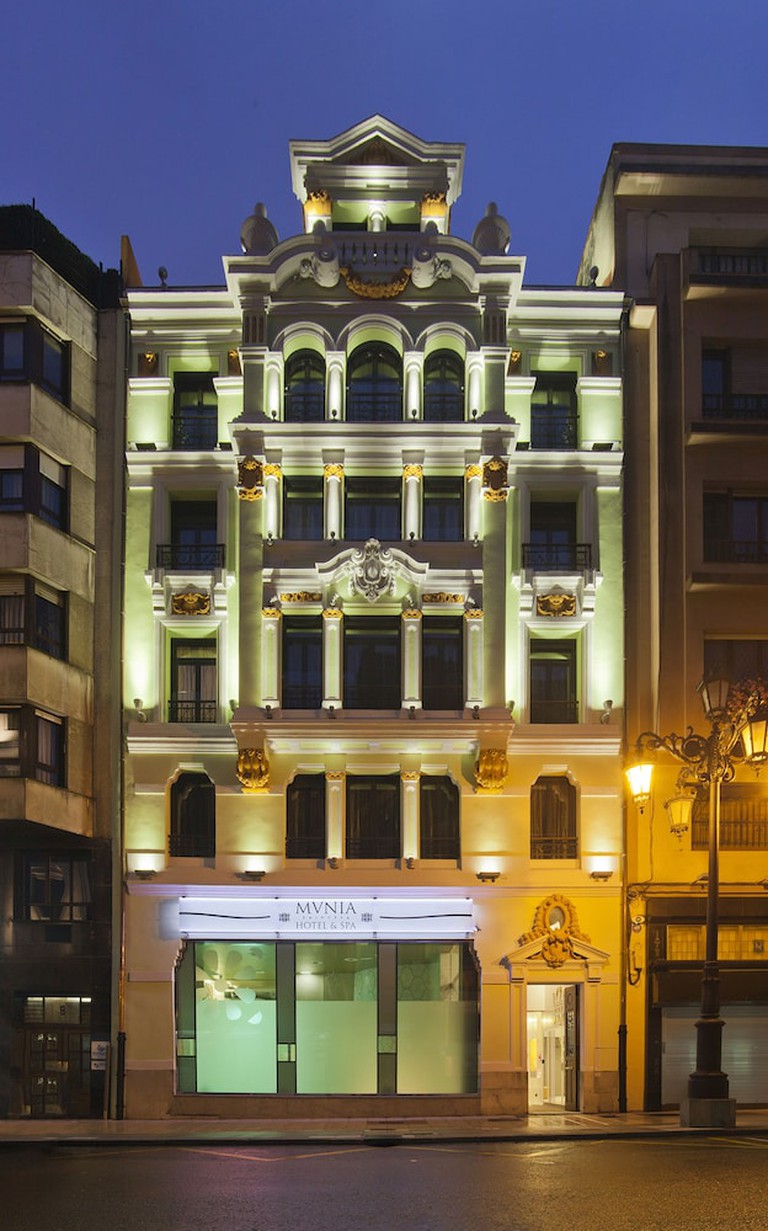 Hotel & Spa Princesa Munia sits in the centre of Oviedo, surrounded by leafy parks and historic monuments. As the name suggests, it’s a hotel fit for royalty. The rooms are spacious, decorated in natural tones of cream and biscuit, which are complemented by designer lampshades and sleek gold and wooden furniture. The most impressive feature, however, is the luxurious spa – a calming space bathed in baby pink and blue lighting and featuring everything from a hydromassage pool to swan neck jets, rain showers and an ice fountain. There are also rooms for massages, indulgent rituals and body scrubs. 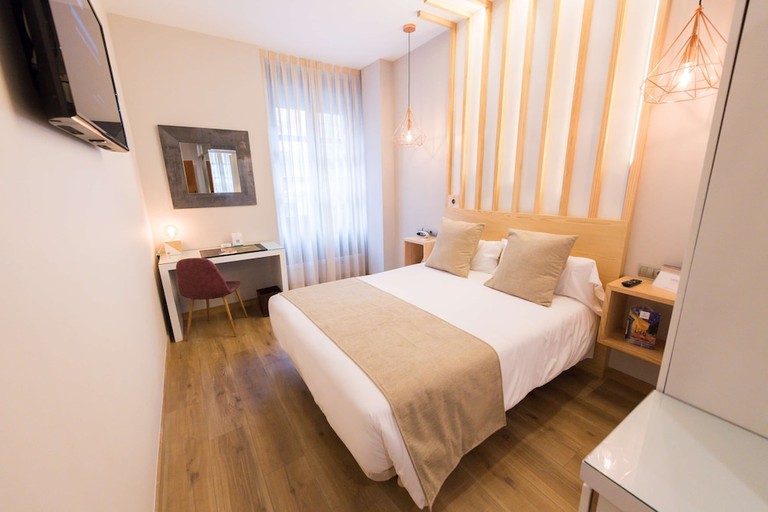 Sister hotel to the Hotel & Spa Princesa Munia opposite, this slightly more low-key property still has plenty to recommend it. It occupies a sensitively restored 19th-century building in the historic heart of Oviedo just steps from the leafy central plaza. Rooms are finished in soothing neutral tones with natural touches and big comfy beds that include a choice of pillows. The in-house bistro extends to a buzzy streetside terrace, plus guests have access to the spa facilities just across the road. 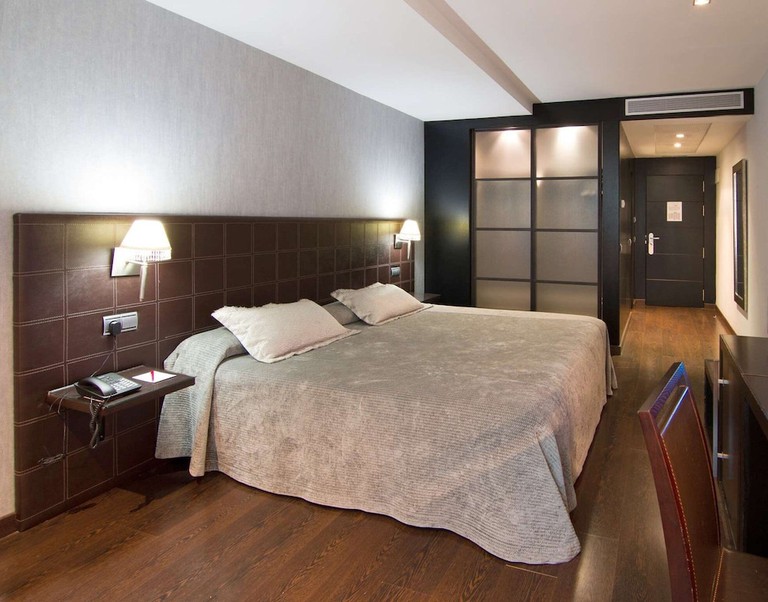 IBERIK Hotel Santo Domingo Plaza sits on the southeastern edge of the city, close to the Rodriga Gardens. Classy and stylish, it’s set around an atrium-like garden filled with plants, decorative umbrellas and a piano. Rooms are elegant, with neutral tones and colour pops in the soft furnishings. There’s also a buffet breakfast plus a gym and small café. 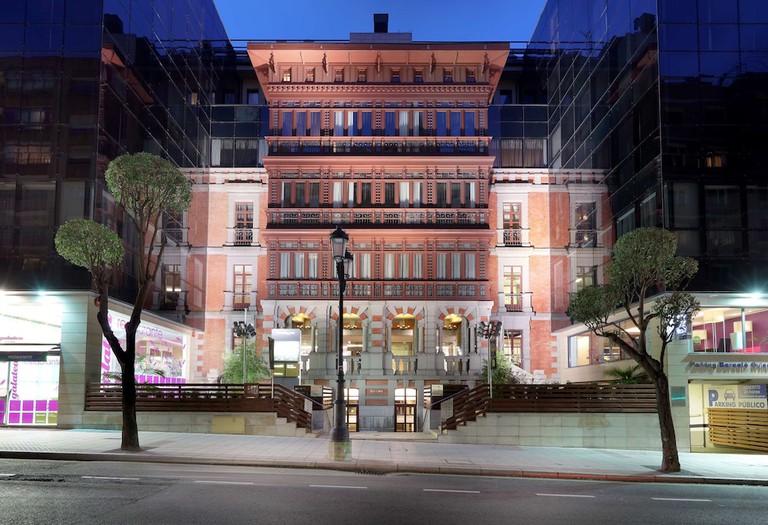 Sandwiched between two black-glass towers, the handsomely restored façade of this century-old mansion stands out. Inside, it is sleek and polished, with smart-yet-inviting spaces and moody low lighting. Design-led guest rooms offer high-end comforts in the form of high-thread-count sheets and extra-thick towels. Breakfast is a highlight, with an emphasis on seasonal superfoods and organic produce. In-house dining continues throughout the day, with a fun tapas bar and exotic-themed restaurant brimming with plant life. 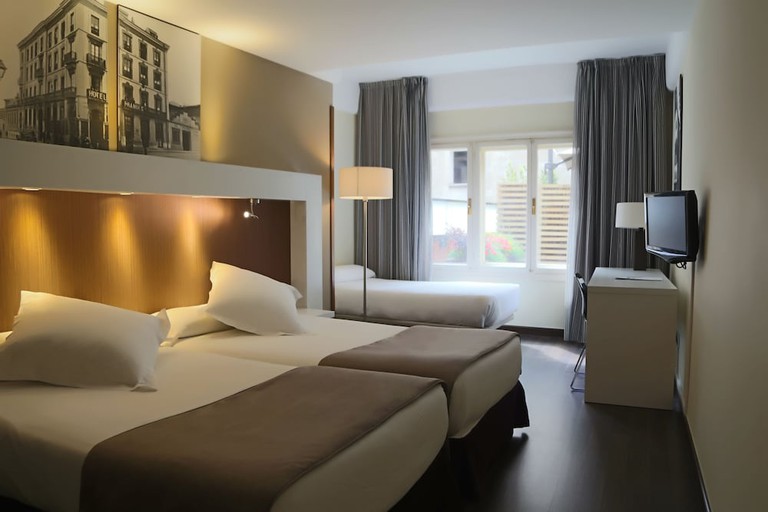 The four-star Gran Hotel España is situated in the historic centre of Oviedo, right next to the Oviedo Cathedral, the Archaeological Museum of Asturias and the Museum of Fine Arts. Rooms are classic and simple, painted in lemon yellow and decorated with old black-and-white photos of Oviedo; most also have a balcony or small terrace. Head to the Mestura restaurant for Mediterranean cuisine, and the Black Bar for a classy cocktail.

Ayre Hotel Oviedo makes quite a statement with a futuristic look, flashy lights and contemporary sculptures. It was designed by architect Santiago Calatrava, who also designed the City of Arts and Sciences in Valencia and the undulating Bodega Ysios in La Rioja. The Ayre façade looks like a huge spaceship, framed by a giant triangle, while the interior (rooms included) is decorated with futuristic fluorescent lighting. The hotel also has a gym and spa with city views and the innovative El Bistró restaurant. 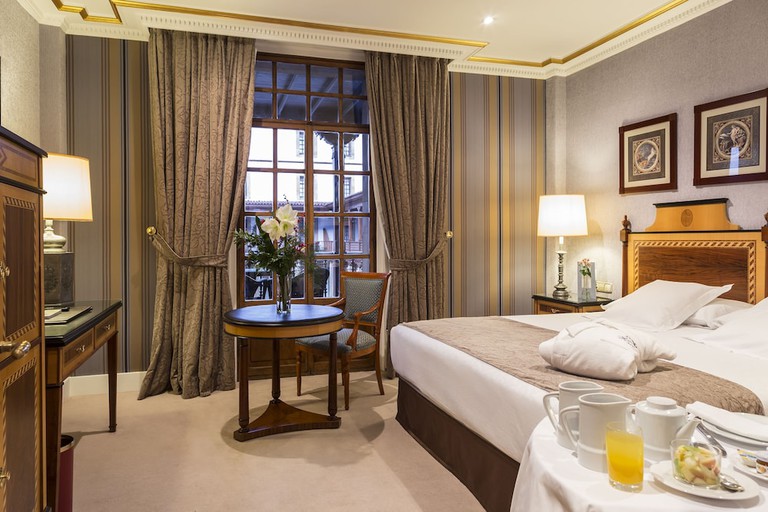 The Eurostars Hotel de la Reconquista, built in 1752, looks much like a grand palace, although it was in fact once a children’s hospice and residence. The building was transformed into a luxury hotel in the 1970s by architects Sainz de Vicuña and Fernández Cuevas. Set around a huge courtyard, rooms and public spaces are fit for royalty with glittering chandeliers, four-poster beds, high ceilings and grand furniture. There’s also a small gym, a buffet breakfast room and a gourmet restaurant.