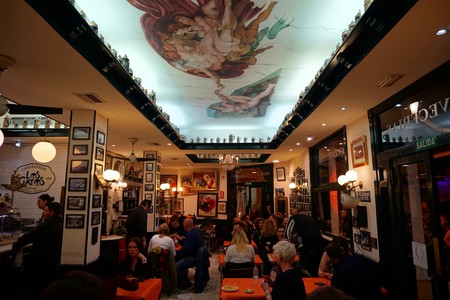 Even by the hedonistic standards of southern Spain, Málaga’s locals party hard and party late. Dinner, for example, isn’t often contemplated before about 9.30PM–10PM. The historical city center, clustered around Plaza Merced, Plaza Constitución and the cathedral, is where to find the best bars and restaurants to eat and drink well into the evening – and all of them have a little something extra to offer, too. Crocodile and live flamenco, anyone?

It’s a safe bet that there aren’t many restaurants in Andalusia – or anywhere else in Spain for that matter – where you can tuck into a kangaroo steak at the same time as watching a live flamenco show. This imaginative combination of artistic and culinary pleasures defines the dining experience at Vino Mío, a super-friendly late-night restaurant with huge personality. Other standout dishes are a succulent, perfectly-seasoned medallion of South African crocodile, and cod with a decadent cream cheese sauce. Deliciously sweet wines sourced from nearby in Málaga province complete one of the most inventive and exciting menus in the city. Watch how many of these you put away though, because at the end of the show the dancer selects diners to come up and try their flamenco skills – an experience which, when combined with the classy cooking and charming service, makes an evening at Vino Mío truly unforgettable. 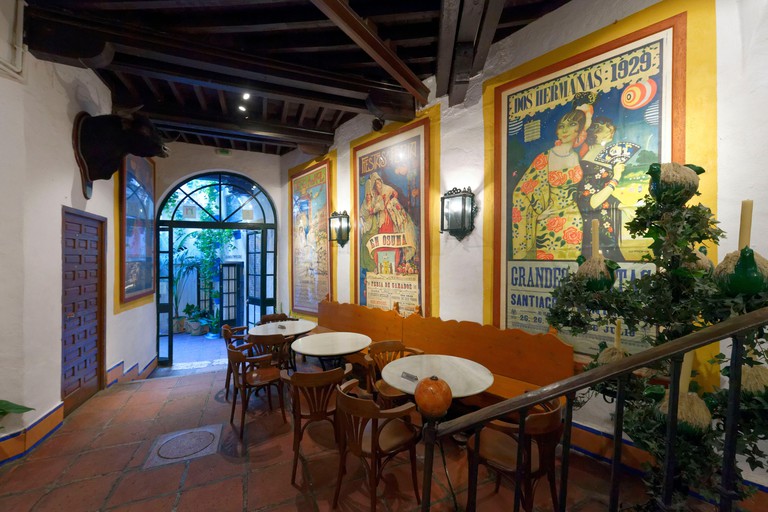 Not for nothing is El Pimpi one of Málaga’s best-known and most-loved restaurants. Situated in the heart of the city’s historical center, El Pimpi offers traditional Andalusian dishes cooked with flair and authority. These can be enjoyed, late into the evening, in one of several different spaces: downstairs, an intriguing network of corridors and beautiful internal coutryards leads to a typically-chaotic Andalusian dining room, the walls of which are adorned with huge bullfighting posters and paintings. In the upstairs restaurant a more refined, modern style dominates, while on hot summer evenings you can enjoy refreshments on the extensive terrace, which overlooks the Moorish Alcazaba and the Roman amphitheater. An army of waiters (who scurry around the maze-like interior with amazing assurance) provides excellent service, much like the original “Pimpis” – cheerful locals who would help sailors arriving in Málaga’s port to unload their wares before showing them where to head for a drink and a snack. 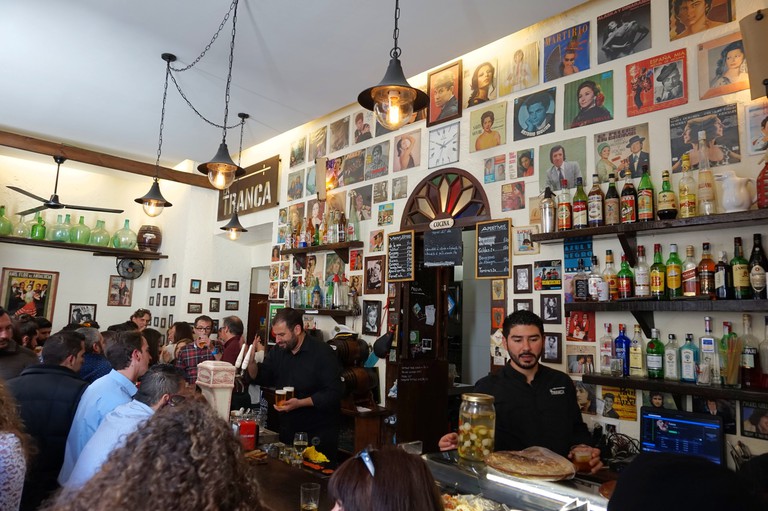 There are few better places to see how malagueños party than La Tranca, a joyfully chaotic little bar on the edge of Málaga’s old city center. Welcoming and friendly owner Ezequiel keeps the locals well-oiled with vermouth and sweet wine from Málaga, as they eat and drink below a wall plastered with the covers of classic Spanish albums, from pop to flamenco. It only adds to the atmosphere at La Tranca that an improbable number of malagueños manage to wedge themselves into what must be one of Málaga’s tiniest bars, as well as one of its best. A great place to stop for a late-night snack – such as their pulled-pork rolls or a slice of cougette and spinach-infused tortilla – La Tranca’s energetic bar staff are also liable to break into song during service, providing you with a little free entertainment as well as refreshment. 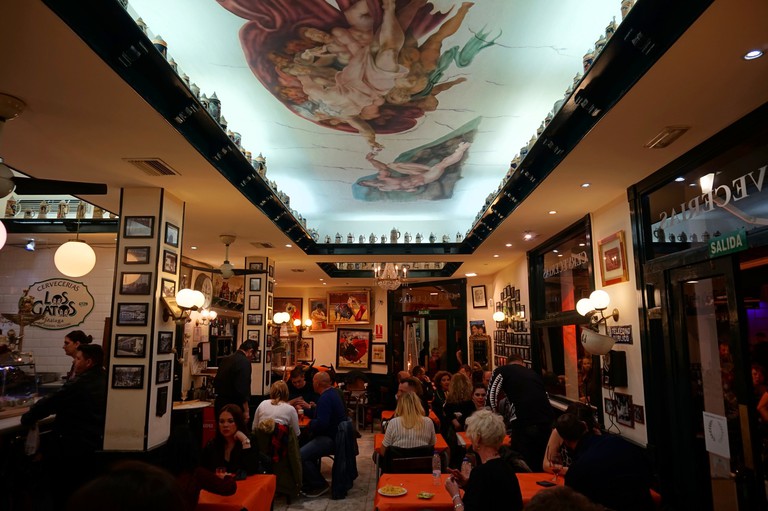 One of the best bars and eateries in central Málaga, Los Gatos offers the full range of typical Andalusian tapas into the small hours. Homemade tortilla, Russian salad, strips of cured ham drizzled with olive oil – it’s all here, and it all emerges, with astonishing speed, from a tiny kitchen at one end of a bar staffed by some of the city’s friendliest servers. The décor is traditional, with an emormous stuffed bull and bullfighting paraphernalia occupying one corner, and various trinkets and antique items randomly scattered throughout the restaurant. Los Gatos pulls off the not-inconsiderable feat of appealing to both locals and visitors, the latter of whom are warmly welcomed in both English and Spanish. Its location just off Calle Granada – the historical quarter’s central street – means it’s a perfect place to enjoy a late-night snack after or before visiting one of the many cocktail bars nearby. 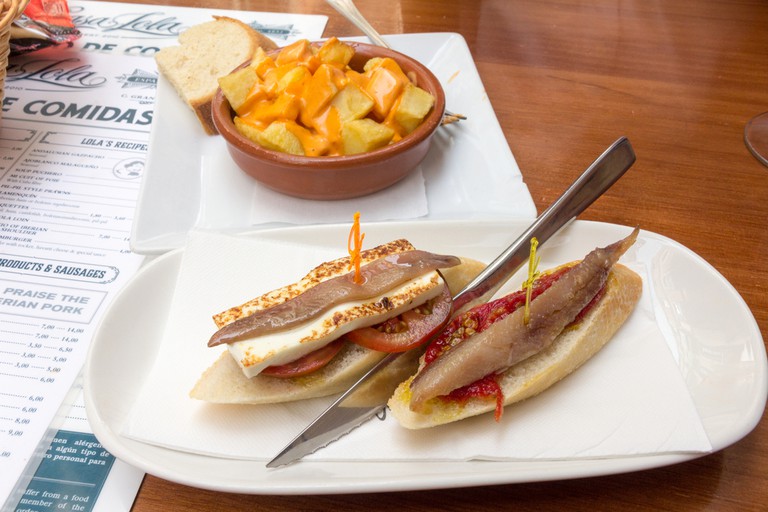 Competition for customers on Calle Granada, the bar-packed central thoroughfare of Málaga’s old center, is fierce. It speaks volumes about this uber-traditional establishment, then, that it’s always heaving. Casa Lola is still in full flight when many of the restaurants nearby are starting to wind down, meaning the locals – who don’t even think of heading out for dinner before about nine thirty at night – congregate here for long, noisy catch-ups late into the evening. Propping up the old-style chrome bar with a beer and a plate of tradional tapas, you simply blend in among them. You can also enjoy a snack on the small terrace outside on Calle Granada, and watch Málaga’s colorful street-life unfold before you. Don’t arrive at Casa Lola too early though, because the later it gets, the better the atmopshere in one of Málaga’s most popular tapas bars. 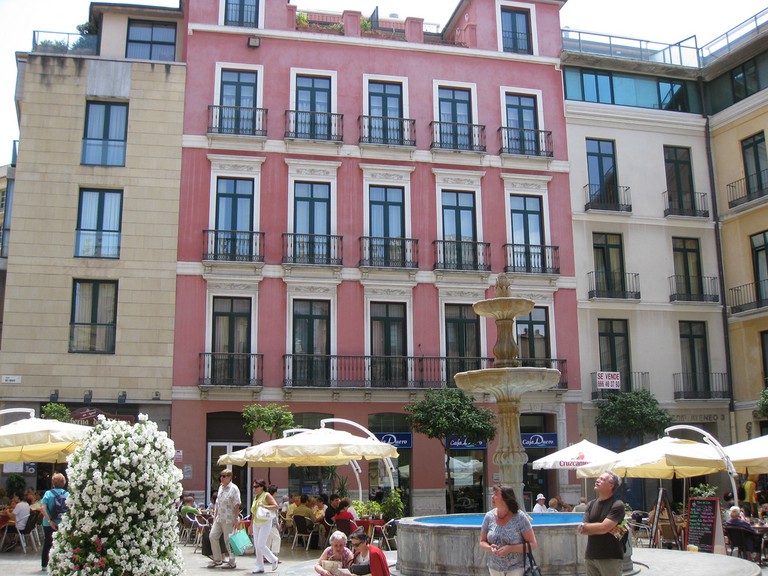 For a late-night, open-air bite, La Malagueña’s terrace is hard to beat. Directly facing the towering, elegant façade of Málaga’s cathedral on Plaza Obispo, this smart eatery occupies one of the city’s premium eating and drinking locations. What comes as a pleasant surprise, then, is that this is not reflected in the prices, which are no higher than normal in Málaga (which is to say they offer superb value). Sitting on its romantic terrace, you can enjoy the full range of southern Spanish cuisine late into the evening while contemplating the great cathedral, which is known as the “One-Armed Woman” due to its uncompleted second tower.