The Best Hotels in Pamplona, Spain 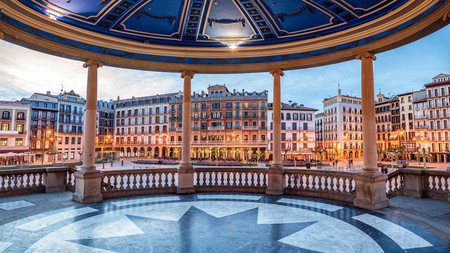 No matter your reason for visiting Pamplona, there is a perfect hotel to suit you | © Timo Christ / Alamy Stock Photo

There are many reasons to visit Pamplona: for the famous Running of the Bulls during the festival of San Fermín, as a stop along the long-distance Camino de Santiago, or perhaps just for a taste of late-night pintxos bars. There are hotels for every style of travel, whether you choose to stay in the thick of it, where bulls run below your room’s balcony, or you want to escape to the lush green countryside. Here’s the cream of the crop, bookable on Culture Trip. 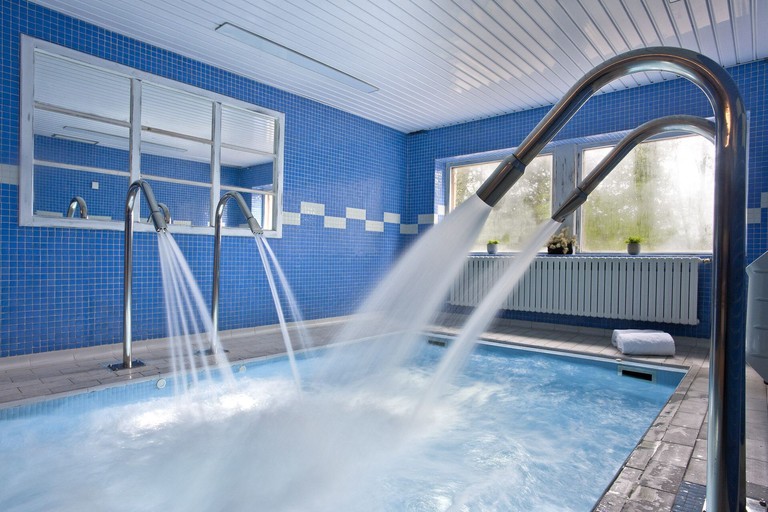 Courtesy of Pamplona El Toro Hotel and Spa / Expedia
View Rooms
Originally built as a noble house in the 1600s, the facade of this hotel was moved, brick by brick, in the 1960s to recreate that country manor opulence on the outskirts of Pamplona. Entering the lobby, you’re greeted with bohemian grandeur: flourishing botanica against wood beams and honey-brown stone, and clusters of chandeliers sparkling away. The elegant-rustic look is continued in the rooms (the mini room is perfect for solo travellers), and the top-end suites come with a fireplace and soaking tub. There’s also a spa, where a hydrotherapy pool and sauna offer a bit of downtime after the festival of San Fermín, which takes place 5km (3mi) away in Pamplona’s historic heart.
More info 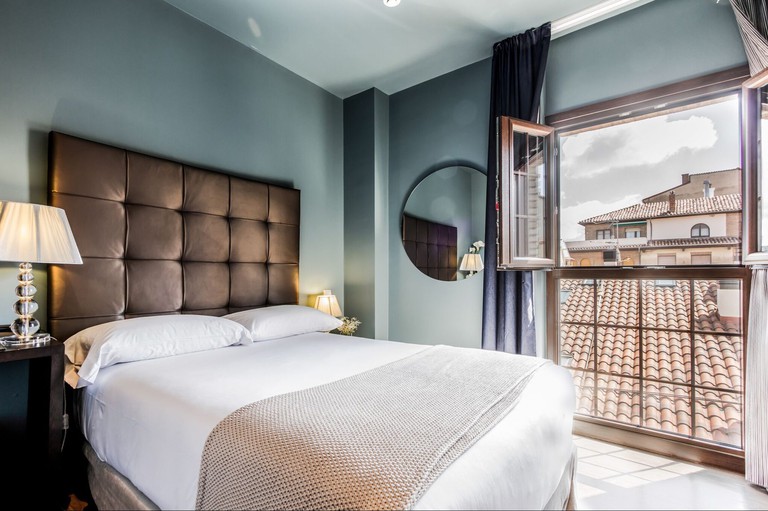 Courtesy of Pamplona Catedral Hotel / Expedia
View Rooms
On the quieter side of the old town, Pamplona Catedral Hotel is perched where the trailhead leaves for the Camino de Santiago. You wouldn’t know that it was once a medieval convent –but for the wrought-iron entrance – since it feels ultra-modern and luxe inside. The restaurant, housed in the convent’s old chapel under dramatic, stained-glass windows, is not your average hotel restaurant either. Local dishes from the Navarra region are fused with fine dining – like the lamb in jus, topped with local cheese. The restaurants of central Pamplona are also within walking distance, if you prefer to venture out.
More info 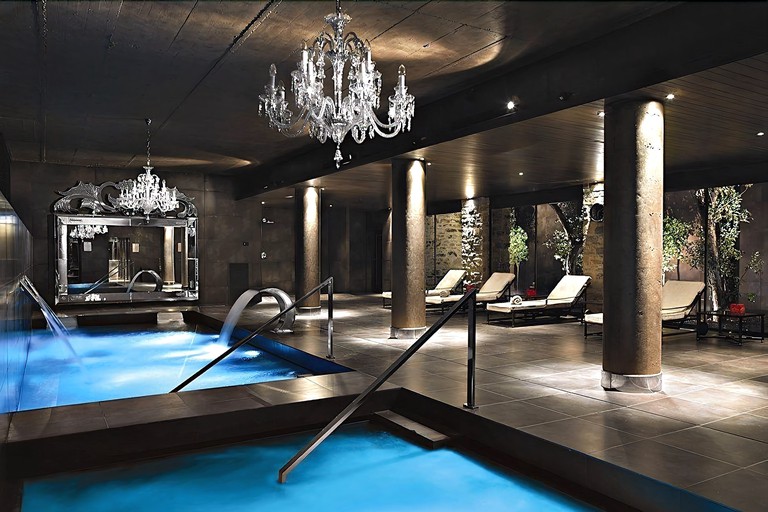 Courtesy of Castillo de Gorraiz Hotel Golf and Spa / Expedia
View Rooms
This sumptuous hotel 15 minutes outside of Pamplona is a destination in its own right. With an 18-hole golf course, a restaurant in the confines of an ancient castle tower and a spa that offers days’ worth of luxury treatments, you don’t need to leave the hotel grounds to fill your time. The hotel itself may be housed in a modern annex, but it has the luxe feel of a medieval castle inside, with dark velvet trimmings, a roaring fireplace in the lobby and curtained four-poster beds in the suites. Even the standard rooms have a castle-like vibe, with Celtic flourishes on the headboards and ottomans at the foot of every bed.
More info 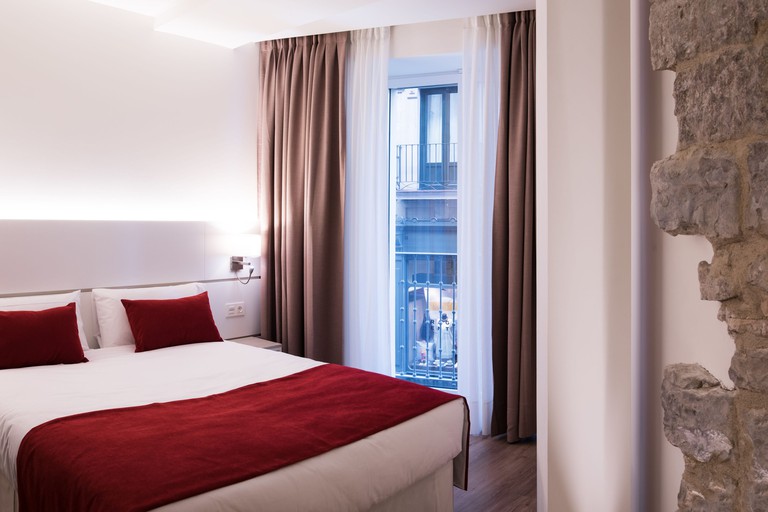 Courtesy of Hotel Pompaelo Urban Spa / Expedia
View Rooms
It doesn’t get more central than this modern hotel. Sharing a plaza with the Gothic masterpiece that is Pamplona’s Town Hall, don’t be surprised if you encounter a bustle of visitors just outside the hotel door, cameras pointed towards the grand architecture all around. You’ll also get a direct view of the Running of the Bulls from the wrought-iron balconies of each front-facing room. Inside, it’s all sleek modernism from top to bottom – from the skylight roof bar with its illuminated settees, to the basement spa with its hydrotherapy whirlpool. The odd exposed wall or medieval archway serves as a reminder that this hotel was built on the foundation of the 11th-century Tower of La Galea.
More info 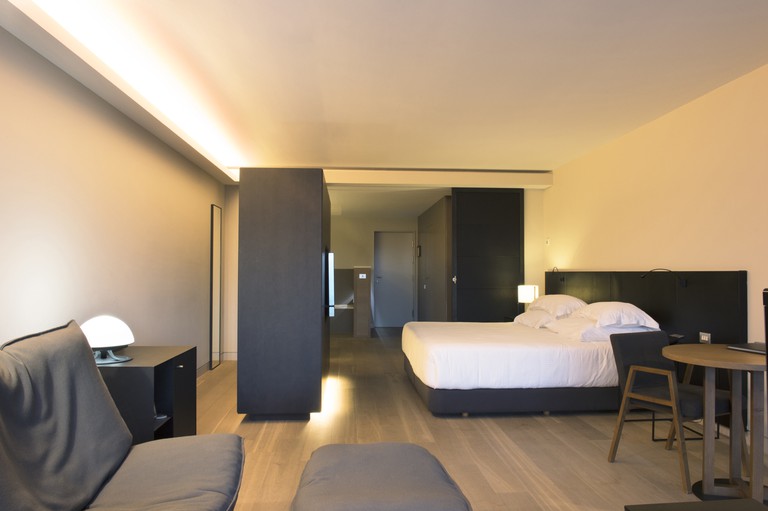 Courtesy of Hotel Alma Pamplona / Expedia
View Rooms
Just outside the city of Pamplona, this luxury hotel makes the most of its proximity to the foothills of the Pyrenees and Arga River. After an uninterrupted night’s sleep in simply stunning rooms – think stone sinks, bathtubs in every room and views of the mountains from a wall of glass – the staff will happily prepare you a kayak to paddle down the adjacent river, or show you the local cycle trails into the mountains. If you like your adventures a little more low-key, there’s a spa with a Turkish hammam, a Finnish sauna and loads of treatments on offer to keep you blissfully entertained. The centre of Pamplona is a 10-minute drive or taxi ride away.
More info 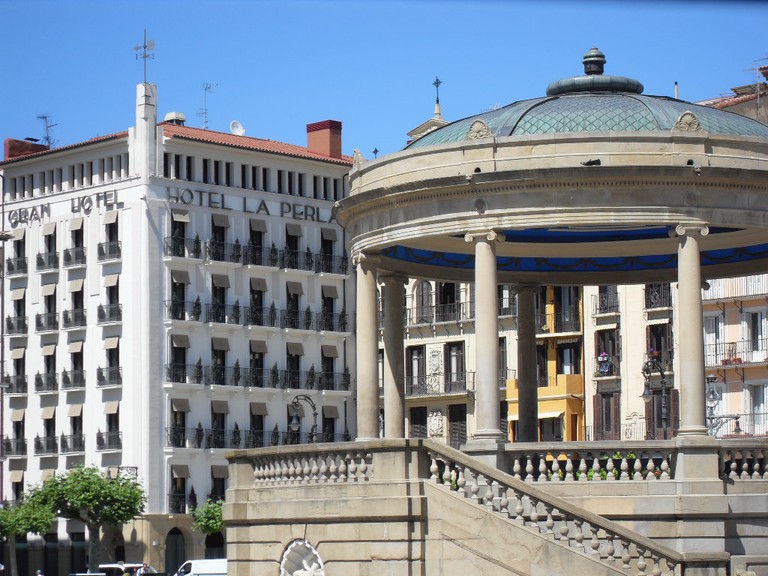 Courtesy of Gran Hotel La Perla / Expedia
View Rooms
In the heart of Pamplona, this historic hotel has seen the likes of Ernest Hemingway, Charlie Chaplin and Orson Welles through its doors. This place radiates old-world charm: a piano player often tinkles away in the lobby, and huge rooms come with antique dressers and velvet chairs. Ask to stay in Ernest Hemingway’s room and you’ll find a time capsule, perfectly preserved since the 1950s. Booking a room with a balcony overlooking Calle de la Estafeta is a must during the festival of San Fermín, as the bulls run right underneath.
More info 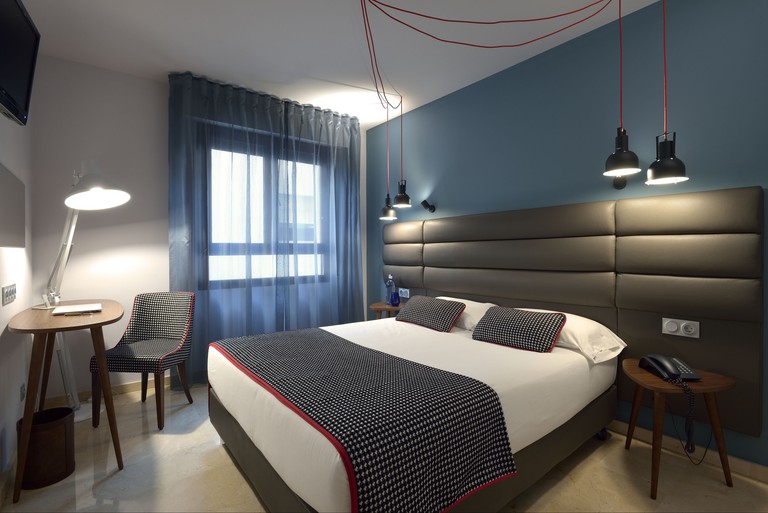 Courtesy of Pamplona Plaza / Expedia
View Rooms
A 10-minute walk from the centre of Pamplona, this swish hotel is a solid choice for a city break. Its location outside the centre keeps the price tag pleasantly low, but there’s no compromising on amenities and style. Rooms are done up to 21st-century standards in soothing teal and stone tones. If self-catering is more your style, opt for a one- or two-bedroom apartment with a kitchenette and stylish lounge to relax in after a day in the centre.
More info 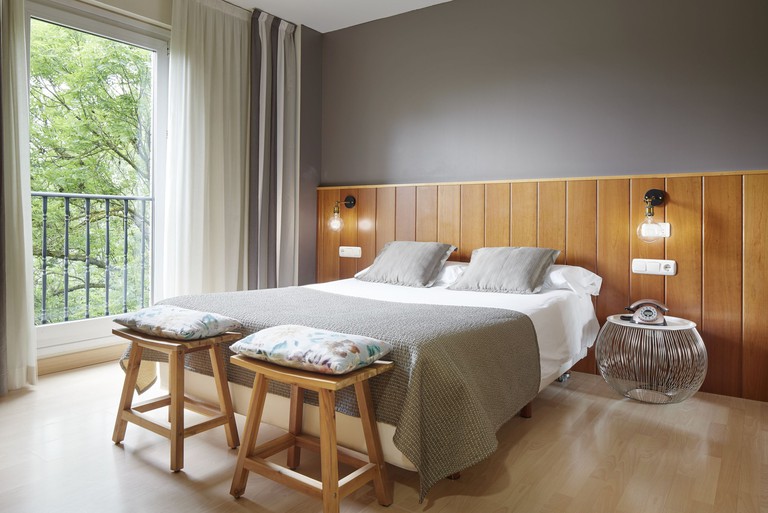 Courtesy of Hotel Iriguibel / Expedia
View Rooms
Hotel Iriguibel is perched on the banks of the Arga River, in the peaceful leafy green village of Huarte. It’s a 10-minute drive into the centre of Pamplona, or 15 minutes by bus. A handful of laid-back local restaurants and cafés can see you through the day, and it makes a great jumping-off point for the natural wonders of Navarra – the Irati Forest, Baztan Valley and the quaint towns along the Camino de Santiago. The hotel itself makes the most of its peaceful surroundings, with a breakfast patio under lush greenery setting you up for the day. Rooms are modern, though wood panelling gives them a log cabin feel, and the upgraded doubles come with a beautiful river view.
More info
Give us feedback