The Best Food Markets in Malaga

© Jeanne Menjoulet / Flickr
Malagueños, as the residents of Malaga are known, love their food – fish in particular. It’s no wonder, then, that the city is home to some superb food markets, selling everything from the Costa del Sol’s freshest fish and seafood to some of Andalusia’s finest organic produce. And as is fitting for a city that always seems to be socialising, these markets are also great places to grab a cold beer and some tasty tapas.

Market, Spanish, Vegetarian
Atarazanas is Malaga's most famous market | © Andrew Nash / Flickr
Malaga’s grandest market sits just off one of the busy thoroughfares leading from the Guadalmedina river to the old town. Its enormous, Moorish-style arched entrance looks more like something you’d expect to see in Granada’s mighty Alhambra than in a food market – but then Atarazanas hasn’t always been a marketplace. The archway is the only arch to survive from the original 14th-century seven-arched structure, which was a shipyard when Malaga was under Arabic dominion (in that time, the sea came much further inland and used to lap against the structure’s southern wall). Nowadays, it is known for the quality and freshness of its fish – enjoy it fried in the typical Malagueño style and served with a juicy wedge of lemon in the excellent local tapas bars nearby. Be sure to also check out the beautiful stained-glass window on its rear façade.
More Info
Open In Google Maps
10 Calle Atarazanas, Málaga, Andalucía, 29005, Spain
+34951926010
Visit website

Market
Mercado de la Merced, Málaga | © Encarni Novillo
As befits a city that now strives to outdo the rest of Andalusia in pretty much everything, Malaga’s most recently renovated market is not just a place to shop for food. Reopened in October 2015 after a six-month makeover, Mercado de la Merced is now one of the trendiest places to eat and drink in the city, as well as being a den of culinary innovation and excellence. Situated near Plaza Merced in the heart of the old town, the market’s 22 stalls offer everything from cured hams, fresh fish and vegetables to designer tapas bars and sushi stalls. In addition to the streets of Malaga’s old town – just a five-minute walk from the market – the market is also a place where the new and international blend with the traditional and Andalusian.
More Info
Open In Google Maps
4 Calle Merced, Málaga, Andalucía, 29012, Spain
Visit website

Produce sells fast at Malaga’s premier local food market, so for the freshest goods, it’s better to arrive early in the morning. Though relatively small and situated away from the city centre towards Malaga’s enormous ‘La Rosaleda’ football stadium, Salamanca doesn’t stint on architectural grandeur, with a beautiful Moorish-style entrance that gives that of Atarazanas a run for its money. Its offering is every bit as good as the more famous markets in the city centre, with the freshest fish, meat, fruit and vegetables colourfully displayed in stalls run by some of Malaga’s noisiest and most persuasive vendors. This happily chaotic market is well worth the 10- or 15-minute walk from Malaga’s historic centre, which will take you through some of the city’s most characterful residential neighbourhoods. 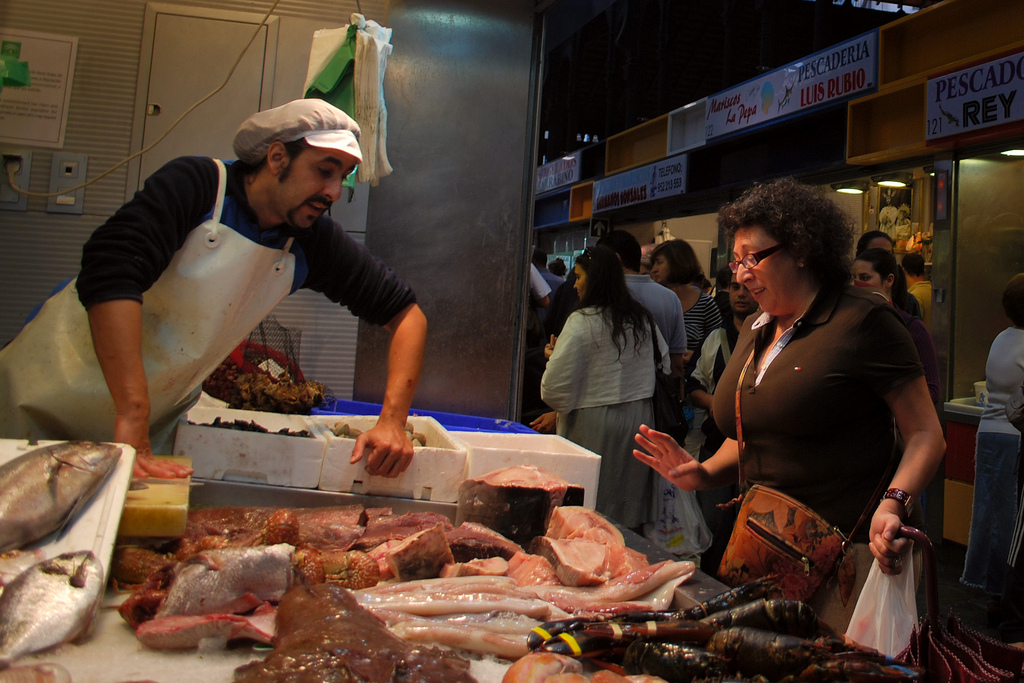 Market, Seafood, Vegetarian, Healthy
Malaga's food markets are colourful chaotic affairs | © Aapo Haapanen / Flickr
Another of Malaga’s recently revamped covered markets, Mercado El Carmen’s modernistic and somewhat unappealing exterior is in stark contrast to the quaint old church that sits next to it. The usual cacophony of bargaining and haggling awaits you inside, along with what many Malagueños say are the best fish and seafood stalls in town. Indeed, El Carmen sits in the neighbourhood known as ‘El Perchel’, named after the hooks – ‘perchas’ – on which local fisherman used to hang the day’s catch to dry. Though now surrounded by fashionable tapas joints, this market has not lost its truly local ambience or its wonderfully fishy aromas.
More Info
Open In Google Maps
3 Calle la Serna, Málaga, Andalucía, 29002, Spain
+34951926010
Visit website

About seven years ago, a group of farmers and fans of organic produce formed the ‘Guadalhorce Ecologico Cooperativa’, a collective that promotes the produce of Malaga’s fecund Guadalhorce Valley. Every month, this dynamic initiative – which also runs an online store offering everything from organic chocolate to pasta – tours Malaga province with what has become one of the best farmers markets for miles around. It comes to Malaga every second and fourth Saturday of the month, sets up on Calle Cervantes by the city’s historic bullring and sells some the freshest and most eco-friendly produce in Andalusia from colourful, open-air stalls.