The Best Food Markets in Granada

Courtesy of Encarni Novillo
Each of Granada´s principal residential quarters hosts excellent weekly markets selling the freshest fruit, meat, vegetables and bread. There is also a super-chic covered shopping area right next to the cathedral, a classy place to do the weekly shop. Here is our guide to the best of Granada´s colourful, chaotic fresh food markets.

Market
San Agustín Market, Granada
Granada´s smart and plentiful covered market is a joy to walk around, as well as shop in. Situated just opposite the cathedral and Alacaiceria – once the market to end all markets – this densely-packed cluster of stalls sells the freshest meat, fruit, vegetables, cheeses along with some of the finest quality olive oils and wines in the city. As a tribute to the fact that Andalucians can transform the most prosaic of activities into social occasions, San Augustin also has a few bars and cafes providing drinks and tapas for pit stops in between purchases. The market informally creeps out into the streets surrounding it, with improvised stalls selling yet more fruit – including the eponymous pomegranates, called ‘Granadas‘ in Spanish – and vegetables, flowers and spices. Shopping here is a noisy, vigorous and hugely enjoyable experience.

Market
Plaza Larga market, Granada I | © J2R/Shutterstock
Every Saturday morning, the liveliest square in Albaicín hosts this market. It is a happily chaotic affair and saves the locals the ordeal of heading down into the centre to shop, then returning up the hill laden with their purchases – a task which, in summer, would defeat even the fittest of them. The Plaza Larga market is unbeatable in Albaicín for vegetables, fruit and flowers, all of which are attractively displayed next to Arabic fabrics and ceramics (and sometimes pirated CDs and DVDs). Just down the road there are also some superb little shops selling bread, organic olive oils and wines.
More Info
Open In Google Maps
Albaicín, Spain

If you want a real local market experience in Granada, brush up on your haggling skills in Spanish and head to the rough-and-ready, yet fascinating neighbourhood of Zaidin on Saturday morning. Here, in Granada´s most populated quarter, you will find a vast morning market where vendors will volubly try and sell you everything from fruit and vegetables to clothing and footwear. The Zaidin market is a little way out of Granada’s historial town centre, but the walk takes you on a lovely route down the Acerca del Darro (on which, often, you will find stalls selling artefacts made by local artesans) and over the Genil, Granada’s principal river.

Another truly local affair, La Chana’s Wednesday morning market is a great place to pick up fresh fruit, vegetables and bread. Unlike, for example, the Mercado San Agustin – situated in the monumental city centre of Granada and on the established tourist track – this market is intended only for residents of the immediate neighbourhood, a fact which is reflected in the ridiculously low prices. Vendors tout for business from the back of vans or on upturned boxes and the atmosphere is every bit as chaotic and lively as you’d expect from one of Granada’s most eclectic residential quarters. Just as with the Zaidin and Plaza Larga markets, you need to arrive early for the best buys, because by lunchtime stall-holders are ready to pack up and head for a cold beer and some tapas. 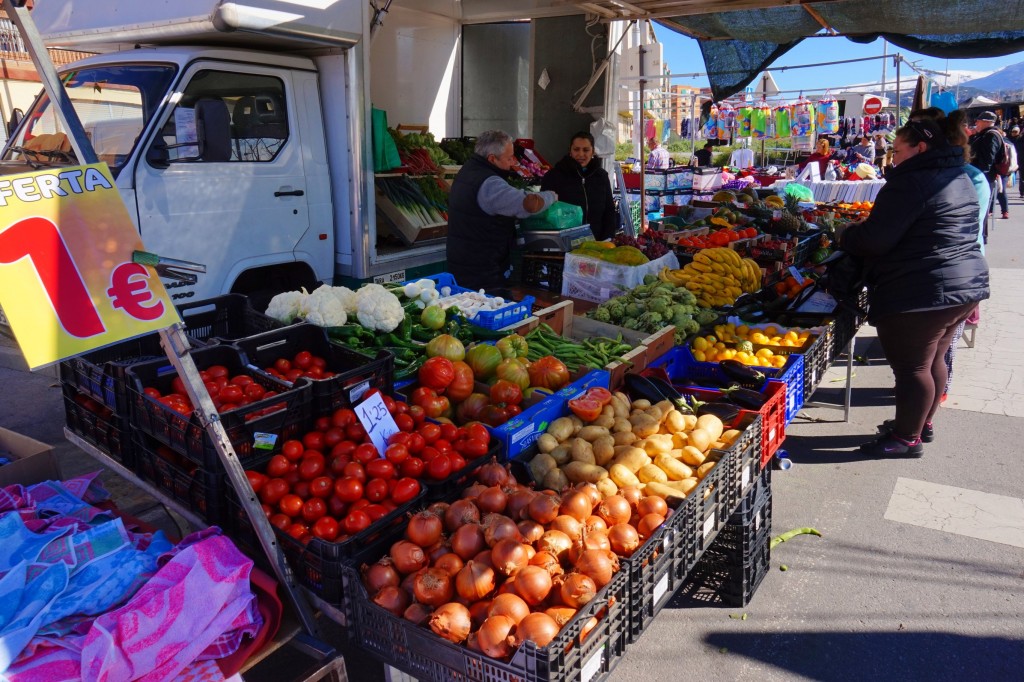 Market
Graada's Alcaiceria market, formerly the city's Grand Bazaar | © Oyvind Holmstad
The Alcaiceria market, situated in a few narrow little alleyways in between the cathedral and Plaza Bib-Rambla, used to be home to Granada´s Grand Bazaar. Here, on a site that originally stretched all the way to Plaza Nueva, the finest herbs and spices from north Africa were sold alongside Arabic silks, fabrics and ceramics. The Grand Bazaar burnt down in the nineteenth century but the modern-day Alcaiceria is still the only place in Granada to go for spices, spice blends, herbs and herbal tea mixes. The spice shop Medievo runs a huge street stall under the shadows of the cathedral, selling various types of ground peppers, paprikas, curry blends and, of course, saffron. Plaza Bib-Rambla is also host to Granada´s annual medieval market, usually held sometime around the city’s week-long Easter celebrations.
More Info
Open In Google Maps
3, 1 Calle Alcaiceria, Granada, Andalucía, 18001, Spain
+34958229045
Visit website