The Best Bicycle Tours in Barcelona 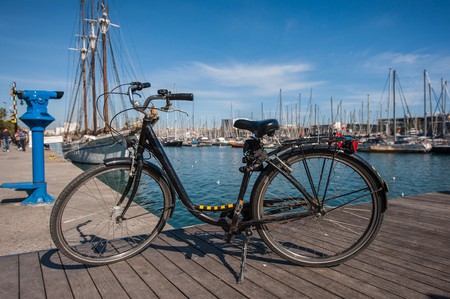 Taking a bike tour of Barcelona’s Old Town is a great way to explore this historic neighbourhood, allowing you to pack more into your day and get a workout at the same time. Whether you’re looking for a leisurely ride or a bit more of an adventure, here’s Culture Trip’s pick of the best.

This was one of the first companies to start offering bike tours in Barcelona and has been operating since 1995 when it opened under the Catalan name Un Cotxe Menys (‘One Less Car’). Today, Bike Tours Barcelona is one of the most trusted local bike tour companies and continues to work with the tourism board to promote a greener kind of sightseeing in the city. The company offers daily English-language tours of the city’s most popular neighbourhoods, sights and parks – most of which are accessed via cycle lane and pedestrian areas – as well as private trips for groups in a variety of different languages.

Bike Tours in Barcelona stand out for offering a night-time tour of the city. This unusual excursion takes you past some of Barcelona’s most famous landmarks, such as the Plaça d’Espanya and the Magic Fountain, architect Antoni Gaudí’s Casa Batlló and the romantic Plaça Reial – all of which are superb to admire at night when they are lit up and with fewer tourists around. 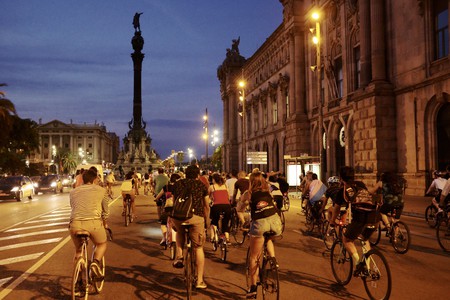 “See more, less effort, more fun” is the motto of this international bike tour company with branches in Paris, London, Munich, Berlin, Chicago, New Orleans, San Francisco and Washington DC, as well as in Barcelona. Fat Tire Tours’ offerings include classic bike tours that take in Barcelona city centre and Gaudí’s Modernist masterpieces, as well as more unusual trips such as an e-bike tour of Montjuïc (the e-bike gives you a little help getting up the slope, so you don’t have to worry about running out of breath) and a night-time excursion to a flamenco show and the city’s tapas bars.

Like the idea of a bike tour but like the idea of a tapas tour even more? Rest assured you don’t have to choose – Barcelona by Bike offer a tapas tour by bike allowing you to get a taste of Catalan cuisine while you explore the city. The tour consists of three hours of cycling on flat surfaces and includes a taste of four different tapas and a couple of drinks each as well. This is a great way to combine an introduction to the local food culture with a visit to some of the city’s most famous sights. 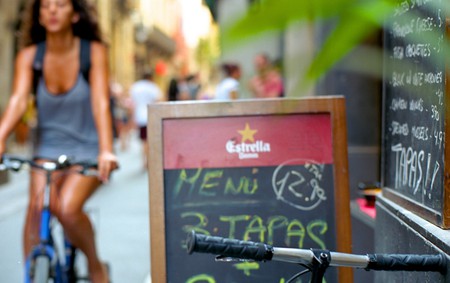 Barcelona CicloTour’s daily offering is one one of the most complete bike excursions in Barcelona, including a total of 17 different sights over the course of three hours, with a stop nearly every 100 metres (328 feet). Starting from the Plaça Catalunya, you’ll see the Gothic Quarter, Gaudí’s Sagrada Família, the beach and even the Roman ruins of the city. Child seat and helmets are provided free upon request, as well as ponchos in case it rains.

Explore the Barcelona of Pablo Picasso through places he lived, painted and drank with Barcelona eBikes, the city’s premier company specialising in e-bike tours. Join this tour and you’ll see the El Born and Gothic Quarter neighbourhoods like never before as you cycle through the streets which inspired the young Picasso. 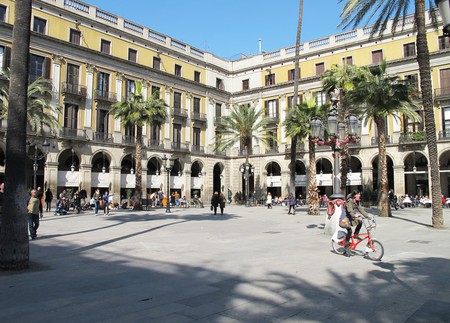 Check out some of Picasso’s favourite haunts | © Emily Allen / Flickr

Last but not least, if you’re feeling a little sportier and want to explore the area surrounding Barcelona, Let’s Velo offer a number of bike tours out of the town of Vilafranca del Penedès – the capital of the cava industry. Cycle through some of the most scenic Catalan countryside on lightweight carbon bikes designed to help you get the most out of your pedal power and stop off at vineyards along the way to get a taste of some of the region’s wines.