The Best Bars and Clubs in the Balearic Islands 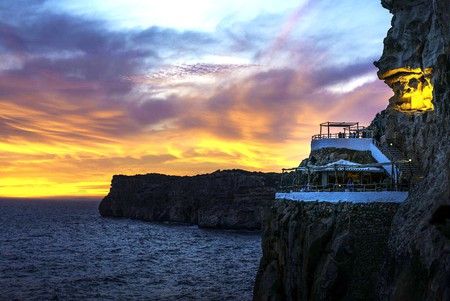 While Ibiza wins hands-down amongst the islands of the Balearic Archipelago when it comes down to banging, high-energy nightlife, its surrounding siblings can certainly also make a claim to some outstanding bars and clubs of their own. We’ve picked some of the best places to have a drink, and maybe a jive, across all four main Balearic isles.

If bigger is better, then Privilege is easily the best club in the Balearics. With a capacity of up to 10,000 ravers, it’s actually officially recognised as the world’s largest nightclub by the Guinness Book of World Records. Previously a restaurant before turning its hand to dance music, the venue is best known for its legendary Manumission party, originally launched in Manchester in 1994, and considered as the most debauched party in Ibiza at the time. The event ran for 15 years before moving to the rival club Amnesia in 2007.

For a more mellow night out, channel your inner hippy and head to Kumharas. This beachfront hangout offers spectacular views of the stunning Ibizan sunsets and, although just a short distance away from the tourists in San Antonio, this chilled-out bar feels like a world apart. If you’re short on hippy apparel, you can always get kitted up at one of the stalls selling bohemian gear late into the night. There’s also super-relaxed terrace where you can recline with a flavoured shisha pipe. Out of sight, man.

While the super-club of Ushuaïa is a relative newcomer to the island, it’s one that has already garnered legendary status on the club scene. The complex includes the luxury Ushuaïa Ibiza Beach Hotel, which fuses the high-octane clubbing experience with swanky accommodation that attracts some of the island’s biggest A-listers, plus the likes of Paris Hilton, Leonardo DiCaprio, and Kylie Minogue. But people mostly come to Ushuaïa for the amazing open-air parties that take place around the main pool. Owing to its unusual opening hours – with club nights winding up around midnight – it has become not only the place to warm up for parties, but also very much a destination club in its own right. 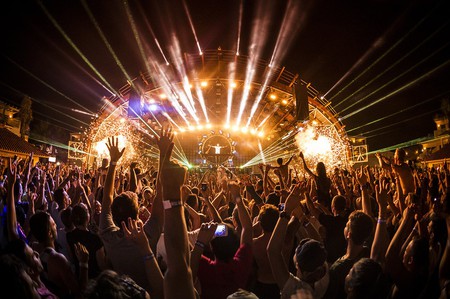 Ushuaïa | Courtesy of the Palladium Group

Lío means a ruckus or rumpus, and this club certainly doesn’t hold anything back. It’s a part of the Pacha franchise, and the group has channelled the anything-goes vibe of the island’s party scene into this cabaret lounge. The phrase ‘dinner and a show’ is taken to new extremes, where even the servers burst into song. Book a table for dinner, then stay for the party until the early hours. With an extensive food menu, world-class DJs and live entertainment all night, you will have all you need for an unforgettable night of spectacle and lavish extravagance.

Those looking for the closest thing Palma has for a strip should head down to the Paseo Marítimo on a Friday night for some guaranteed buzzing nightlife. And as the oldest club on the island the multi-story Tito’s nightclub is the grandaddy, though it certainly isn’t showing its age. The likes of Frank Sinatra and Liza Minelli might have partied here, but nowadays the club hosts world-class DJs (often on their way to Ibiza) and offers some spectacular shows as well as great views over the marina. 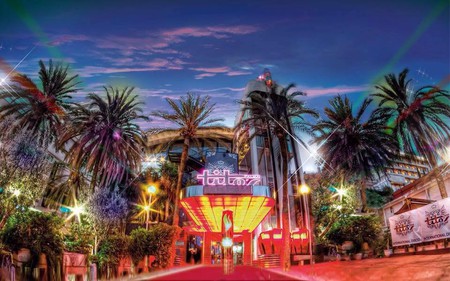 Palma locals love to dance, and at many a fiesta you will see the crowds breaking out into a spot of Flamenco, or Lindy Hopping to live music. The Galactic Club dedicates itself to this passion by promoting swing music, soul, blues and rock and roll in the city. Live bands belt out tunes while the audience shakes, rattles and rolls until dusk. The tapas are particularly delicious and plentiful here, too, so if you have two left feet you can sit back and watch while tucking into some delicious food.

If you’re after a spot of classical decadence, head to the famous Bar Abaco in Palma’s La Lonja neighbourhood. The stunning building and courtyard are extravagantly adorned with antiques and dramatic floral bouquets, and overflow with mountains of tropical fruit. Cocktails are expensive but delicious, and the cava and Champagne list is extensive enough for any connoisseur, making this bar the perfect place for a special treat. 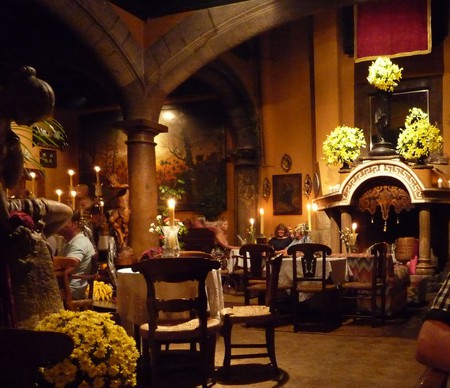 With a peace sign on its roof that can be seen from the air, the super-quirky Blue Bar also features a resident alien mascot and galactic-themed decor. Expect a blissed-out mix of reggae, ambient and jazz music from live DJs as well as regular – and rather bizarre – extra-terrestrial performances. Set on the dunes overlooking Mitjorn beach, it can also claim some gorgeous sunsets. Rumours abound that Dylan kicked back here in the sixties.

Admittedly, Menorca doesn’t have a huge number of bars to choose from, but this is the island’s most famous one. Set into the cliff in the otherwise low-key resort of Cala en Porter, Cova D’en Xoroi is perfectly positioned for daily sunset views over the sea from its cliffside terraces. There’s also regular live music and DJs into the night, but don’t expect anything too raucous; it’s all about the sunsets. To guarantee a good seat for this unforgettable experience, it’s best to book in advance. 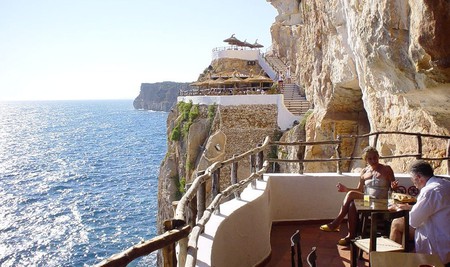 Located practically on the waterfront opposite Mahón’s main port, the Akelarre Jazz Dance Club is a buzzy and cool jazz-oriented bar with regular live music and atmospheric interiors. Downstairs is a café terrace, while upstairs tend to host jazz and blues artists – though you can also enjoy the occasional tribute act and DJ nights.