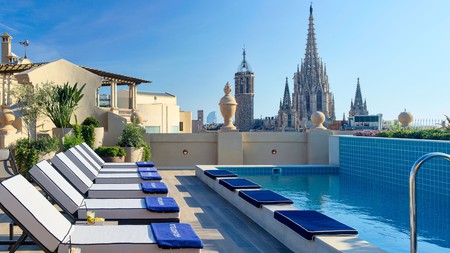 A view of Barcelona's beautiful 13th-century cathedral from the roof terrace of H10 Madison, in the heart of the city's Gothic Quarter | Courtesy of H10 Madison / Expedia

For those looking to experience the breath-taking beauty of Barcelona‘s old town, these gems in its Gothic Quarter are the perfect place to stay, bookable with Culture Trip.

In and among the narrow streets and historic monuments of Barcelona’s Gothic Quarter, you will find some of the city’s best places to stay, with everything from chic modern hang-outs to charming boutique hotels to choose from. Read Culture Trip’s guide to the very best places to stay in the area. 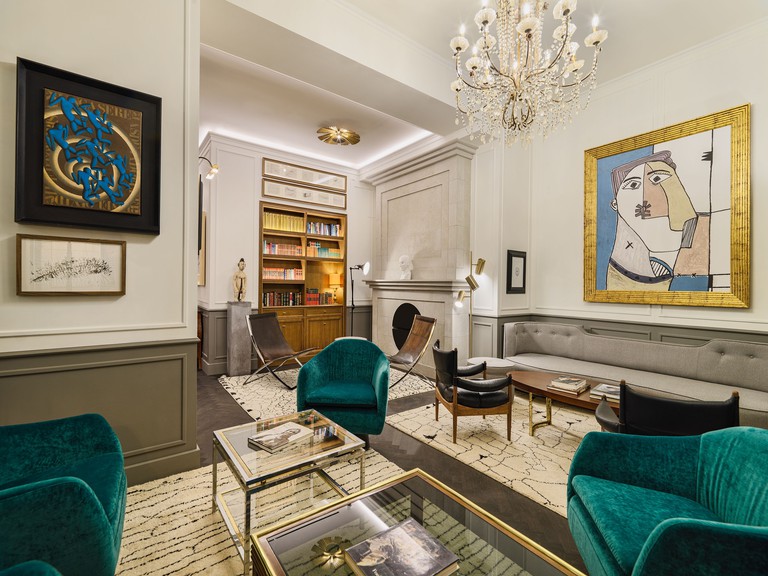 Courtesy of H10 Madison / Expedia
View Rooms
Just three minutes on foot from the 13th-century Barcelona Cathedral, guests at H10 Madison would be better off viewing this towering structure from the comfort of the hotel’s sun-drenched rooftop pool. While most of your time will likely be spent poolside, sipping cocktails from the bar, rooms are bright and spacious with high ceilings and marble-clad bathrooms. Be sure to make your way down to breakfast come morning for a spread of deli-style delights.
More info 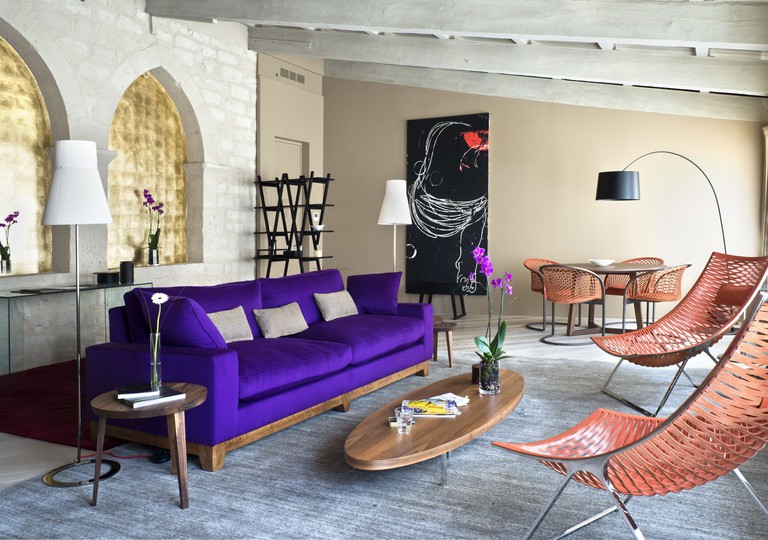 Courtesy of Mercer Hotel Barcelona / Expedia
View Rooms
At the Mercer Hotel Barcelona, history (quite literally) stares you in the face. Some of the rooms here are built into Barcelona’s original Roman defence towers, with the brick tower walls used as features in the otherwise minimalist rooms. The hotel itself is an elegant option for Spain’s second city – and you should put aside a night or two to sample the laid back Le Bouchon tapas bar and the hotel’s main restaurant that serves traditional Catalan cuisine. A nightcap at its cocktail bar is a must, too.
More info 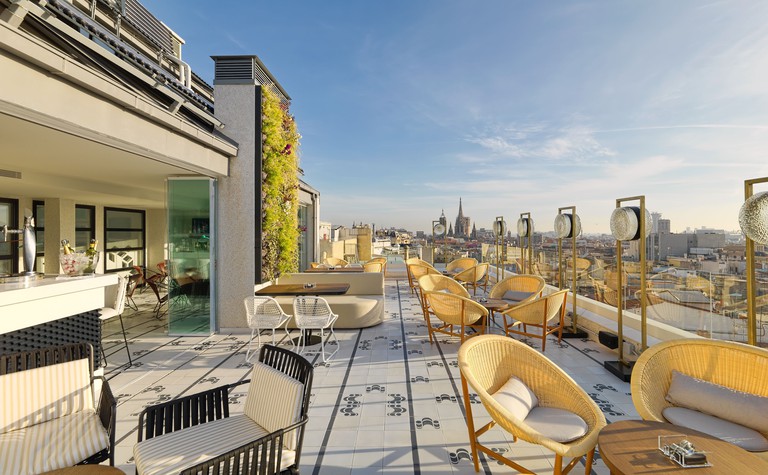 Courtesy of H10 Cubik / Expedia
View Rooms
A design lover’s haven, H10 Cubik’s decor is achingly modern. With a wall-to-ceiling art installation in the lobby, rose gold fixtures in the bathrooms, walls clad in vibrant artworks, views of the Sagrada Familia from some suites, and a glass-fenced rooftop terrace overlooking the terracotta-topped homes, there’s beauty at every turn. After a day exploring the city, a dip in the rooftop pool should be followed by tapas at the terraced Atik Restaurant.
More info 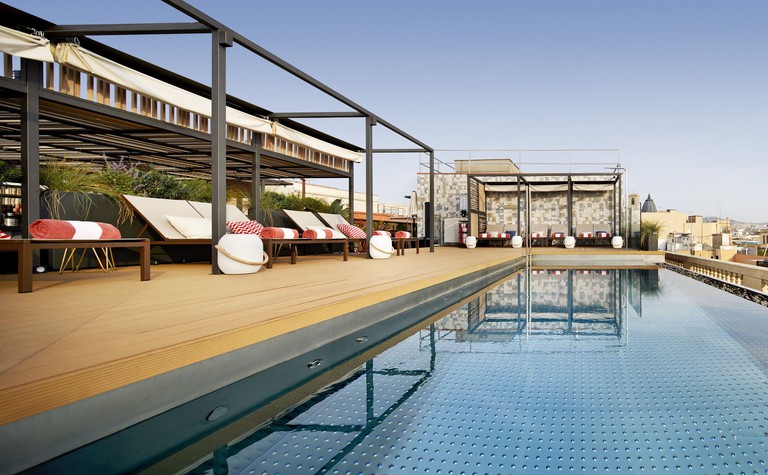 Courtesy of Kimpton Vividora Hotel / Expedia
View Rooms
For a slick stay in the middle of Barcelona’s storied centre, it has to be Kimpton Vividora Hotel. Furnished by local artisans, the hotel is all marble bathrooms, deep-soak freestanding tubs, warming palettes and design-led fixtures. There’s a large rooftop pool and some rooms have private balconies as well. Come nightfall, rub shoulders with locals at in-house restaurant Fauna or sample Catalan cheeses and charcuterie post-siesta at Cafè Got.
More info 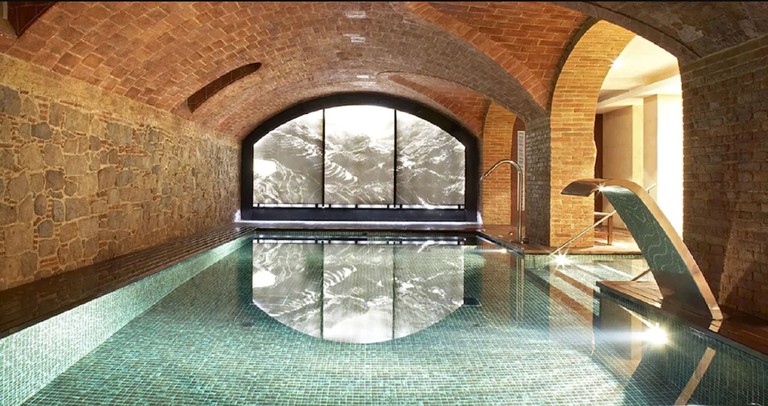 Courtesy of Hotel 1898 / Expedia
View Rooms
Despite being plonked directly on Barcelona’s most famous street, Las Ramblas, Hotel 1898 presents a quiet oasis. While summer is best spent taking a dip in the hotel’s rooftop pool, those visiting in the winter don’t need to miss out – there’s an atmospheric indoor pool hidden in its spa, where you can relax in the dry sauna and steam bath too. After a cocktail or two at the lobby bar, you’ll want to make the most of your room – the deluxe rooms and suites have luxe private outdoor terraces.
More info 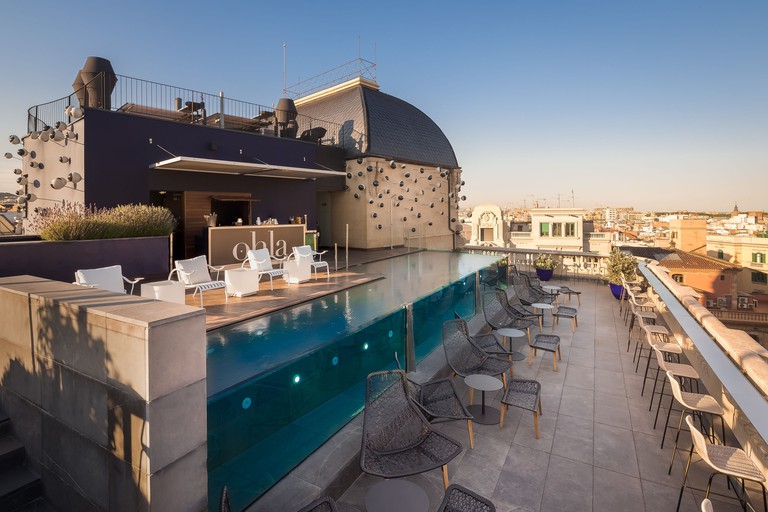 Located just off the Via Laietana, in the heart of the city centre, the Ohla is a modern boutique hotel located in the former palace of one of the Counts of Barcelona. This five-star hotel has been elegantly renovated and stylishly decorated, offering guests the luxury of a modern hotel wrapped in a historic setting. Guests are a minute away from major sites including the cathedral, the modernist Palau de la Música Catalana and the major shopping street Portal de l’Angel. 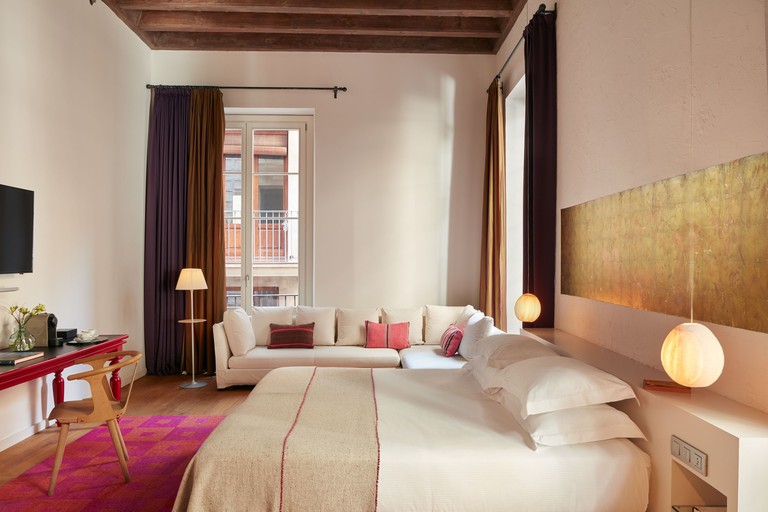 Courtesy of Hotel Neri / Expedia
View Rooms
This charming boutique hotel is located in the magical Plaça de Sant Felip Neri, alongside the gothic cathedral and adjacent buildings. Guests at the Hotel Neri find themselves at the very heart of one of the most historic areas of the town, surrounded by the old Jewish quarter known as El Call. The hotel is housed in a former Medieval palace and maintains all of its original charms while boasting elegantly furnished bedrooms with all the modern conveniences.
More info 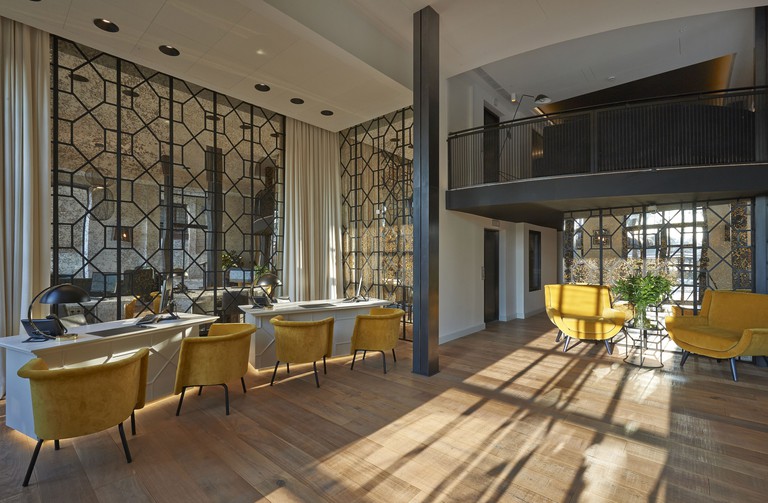 Courtesy of Hotel Serras / Expedia
View Rooms
This luxury hotel is set against the enchanting streets of the Gothic Quarter while being just a minute away from the waterfront of the old port area known as Port Vell. Unique in Barcelona, the Hotel Serras boasts a large rooftop terrace where guests can enjoy a drink or relax in the infinity pool. The restaurant is run by local Michelin-starred chef Marc Gascons, who serves up modern interpretations of French and Catalan classics, perfectly in keeping with the spirit of the city itself.
More info 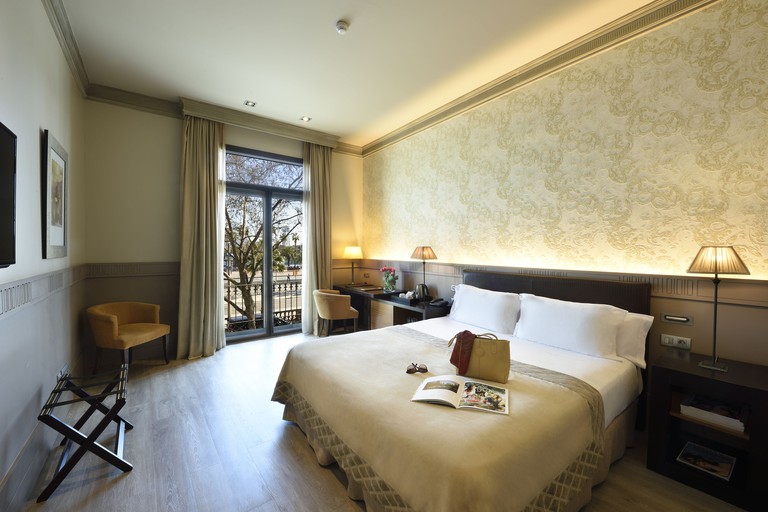 Courtesy of Hotel Duquesa de Cardona / Expedia
View Rooms
Situated on the waterfront of the old Port Vell, the Hotel Duquesa de Cardona is a stylish boutique hotel offering guests superb views of the harbour. The cocktail bar on the terrace is the perfect place to relax at the end of a busy day and soak up the last of the sunshine. The décor is a blend of original period features dating to the former palace’s renovation in the 19th century, alongside subtle touches of modernity for comfort and style.
More info 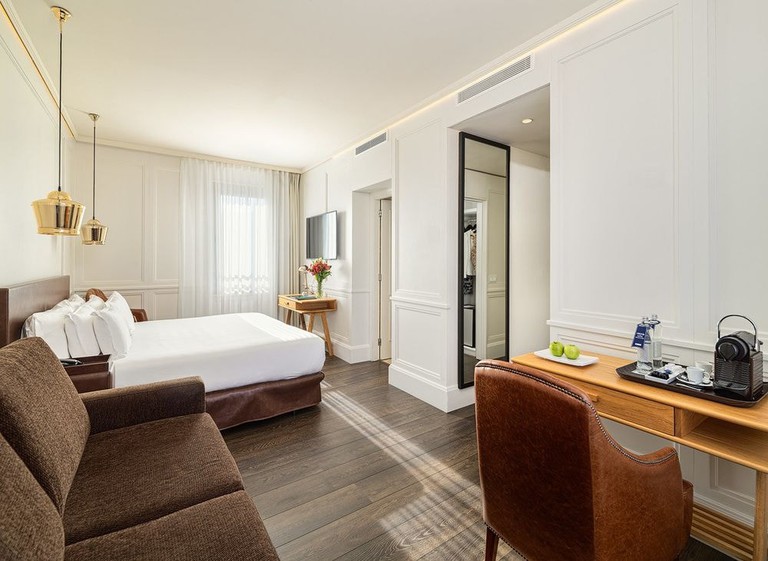 Junior Suite H10 Montcada | Courtesy of H10 Montcada / Expedia
View Rooms
This stylish three-star hotel is located on the Via Laietana, just a minute away from the harbour, and offers comfortable, stylish rooms at more affordable rates than its four- and five-star competitors. The décor at the H10 Montcada includes cosy leather armchairs and touches of wood, bronze and crystal. The rooms are comfortable and elegantly decorated, and you can enjoy stunning views of the city from the privileged roof terrace.
More info 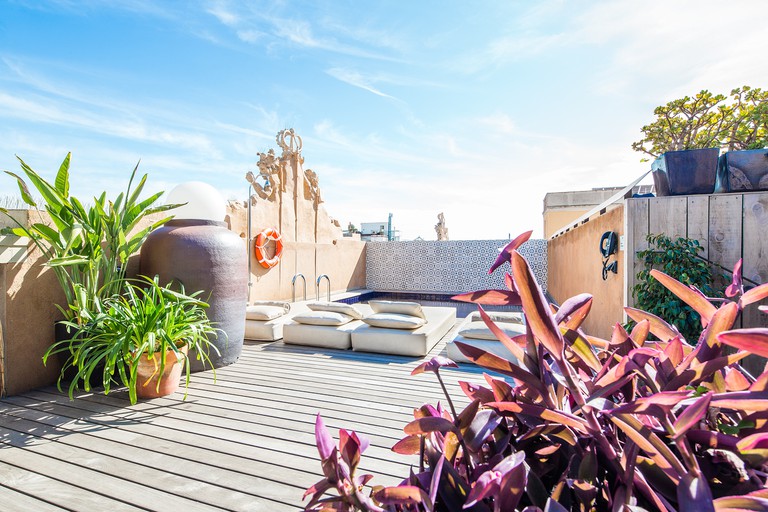 The pool at Hotel DO Plaça Reial | Courtesy of Hotel DO Plaça Reial
View Rooms
Located on one of the most famous squares in Barcelona, the Hotel DO Plaça Reial is a five-star boutique hotel with an elegant interior carefully crafted by local designer Lázaro Rosa Violán. The hotel prides itself on its quality gastronomic experience, inspired by the fantastic local food markets. There are two terraces available to guests, either amid the arches on the square itself or from the rooftop, which has great views of the city’s skyline.
More info 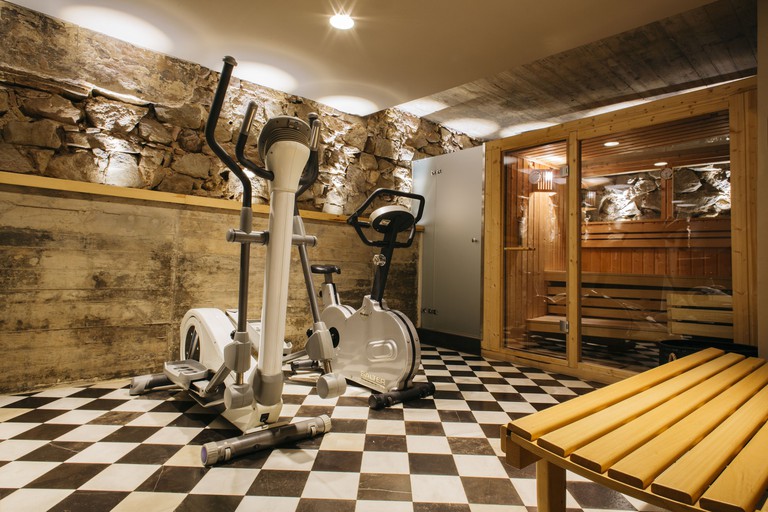 Courtesy of Aparthotel Arai / Expedia
View Rooms
This superior four-star luxury hotel is in a former 18th-century palace that has been superbly restored to preserve the charm and beauty of its original features, which include red brick walls and wooden floors, as well as original artworks on loan from a private collector. The Aparthotel Arai comes fully equipped with a sauna, jacuzzi and gym room as well as outdoor terraces and a solarium. Each of the 32 rooms comes elegantly furnished with unique pieces which reflect the hotel’s style and charm.
More info