The 11 Best Nudist Beaches in the Balearic Islands 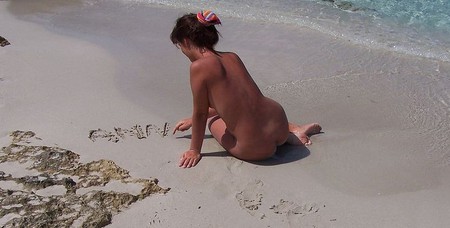 Sprawled out on soft warm sand, sea breeze gently wafting over your skin, wearing nothing but your factor 15 – it’s certainly easy to see the appeal of sunbathing in the buff. And with guaranteed summer sun, some of the world’s most beautiful beaches, and a very relaxed approach to nudism, where better than the Balearic Islands to work on that all-over tan? Here’s a guide to our favourite beaches where you can do just that.

Known as the first naturist beach in Mallorca, the Playa del Mago is a particularly pretty little cove located just next to the small village of Portals Vells on the western tip of Palma Bay. With its pine surrounds, fine white sand and crystal clear water, it understandably remains very popular with nudists. At just 20 metres long, it is rather small so can get a little crowded with summer bodies, but there’s usually enough space on the neighbouring rocks to deal with the overspill. 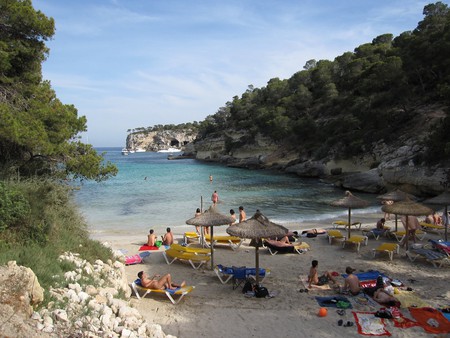 The beach of Es Caragol is Mallorca’s most southerly and, while not the most remote, far enough away from most major resorts to be nudist-friendly, secluded and (usually) uncrowded. At over a kilometre of golden sand, its also a decent stretch of beach offering plenty of space for nudists and non-nudists alike to unfurl. With no lifeguard, restaurants, or toilets, facilities are in short supply so don’t forget to pack your own sustenance.

Long considered one of Mallorca’s ‘hidden gems’, Es Trenc might have lost that secret-beach feel, but it remains super-popular with naturists. It’s also still one one of the island most unspoilt stretches of sand and, while the crowds can descend over the summer and weekends, at three kilometres long there’s enough room for all. 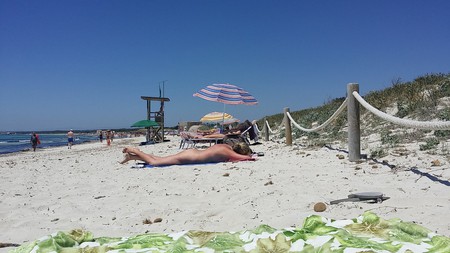 The small cove of Caló d’en Rafelino on the far eastern coast of Mallorca is certainly one of the lesser known, and also one of the more secluded. It’s protected from wind and waves by low cliffs, and once past a scattering of rocks, has lovely fine sand and lovely clear water. You’ll find a mixture of both textiles (non-nudists) and naturists, attracted by its peace and relatively easy access from the nearby town of Cala Morlanda.

Located half way up Menorca’s south coast, at just over two kilometres Son Bou is the island’s longest beach. Like most on Menorca, it is also a pristine stretch of golden sand that slopes gently into the (usually) calm waters of the Mediterranean. While also popular with families, walk along the beach from the slightly busier east side and it becomes increasingly nudist-friendly. The naturist areas are also accessible from the other end of the beach and Santo Tomás resort. 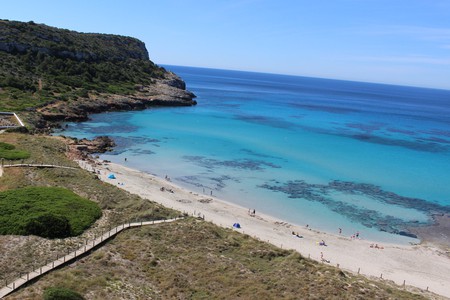 Just along the coast from Son Bou is the equally picturesque and also clothing-optional beach of Playa Binigaus. Shallow clear waters, fine white sand, and striking orange cliff backdrop make for a particularly scenic spot to strip off. The neighbouring Binigaus Valley also has walking trails to the areas impressive caves (though these are best explored con ropa).

While one of Ibiza’s ‘official’ nudist beaches, Aguas Blancas is also very popular with the local (mostly clothed) population. This relatively remote beach is located at the far northeastern end of the island, and this together with fairly tricky access means it’s usually one of the less busy. Cliff-side pools also provide natural mud-packs – so another bonus to shedding the swimsuit means all-over coverage!

Es Cavallet is another of Ibiza’s officially clothing-optional beaches, though located on the other side on the island’s southern pointed peninsular. The long white sandy beach is backed by sand dunes, with lovely views out towards Ibiza’s twin island of Formentera. Due to its proximity to Ibiza town it can get busy and buzzy in the summer, but the main nudist area is in the generally quieter middle section of the beach. 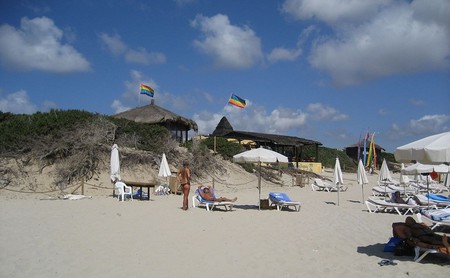 If you’re really looking to find a secluded spot to strip off away from the crowds, then head to Olivera Beach, half-way up Ibiza’s south coast. Thanks to a particularly dicey approach by road, it’s both one of the islands most pristine and quiet coves, with a small patch of sand, rocky sunbathing platforms, and paradise-green sea.

While pretty much all of Formentera’s sandy coastline could be seen as nude-friendly, Platja de Llevant is one of the island’s most popular clothes-free beaches. Set on the northern Trucador peninsular, this beautiful narrow stretch of sand can get a little windy but on calm days the water is like a natural swimming pool. Loungers and parasols are also available to hire, and there’s nearby parking for easy access. 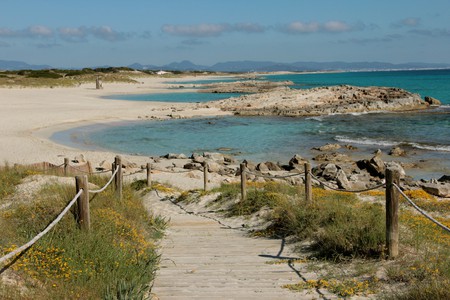 If you prefer the secluded feel of a tiny cove to sunbathe in the altogether, then head to Caló d’Es Morts on the southeastern coast of the island. There’s no road access but footpaths to this small cove are well signposted and its certainly worth the walk. The beach is a mix of sand and rock, backed by a pine-forest hill, with superb views along the island. There’s a rickety fisherman’s shack, but nothing in the way of facilities, so come prepared.