The 10 Most Beautiful Spots In Basque Country

The Basque Country is famous for its awe-inspiring natural landscape, from the majesty of its mountains to its stunning coast, which is famous amongst surfers. From rivers and waterfalls to well preserved forests, this area of Spain offers many spots in which visitors will find themselves surrounded by beauty. Here’s a list of ten of the most beautiful spots in the Basque Country. 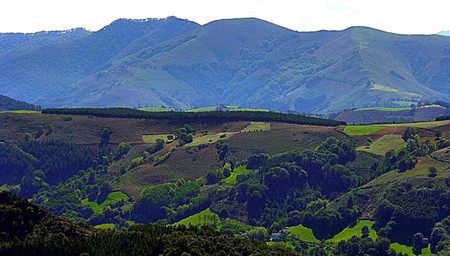 Gaztelugatxe is the small island located on the coast of Biskay near Bermeo in the Basque country. The island is famous for the its 10th century hermitage, a small church which is believed to have once belonged to the Knights Templar order. The island can be accessed by a man-made stone bridge and the hermitage on the top is reached by going up 273 steps. The island offers unforgettable sea views of awe-inspiring quality. The sound of sea waves crushing against the rocks takes the breath away. 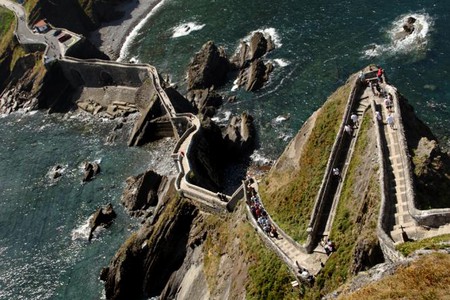 Mount Txindoki is located in the Goierri area, in Gipuzkoa. With a height of 1,346 meters, the mount looks like a pyramid towering over the Goierri valley. For the most part, the mountain is covered by bare rock instead of forest, unlike the other mountains in the area. This, and its steep sides, makes it popular with amateur rock climbers. The legend has it that the mountain is inhabited by Euskul goddess Mari, who dwells in the rock cracks. The mountain trek, with some streams and waterfalls in sight, offers astonishing views of the valley and nearby peaks. 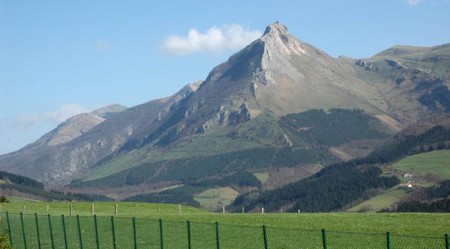 Salto del Nervión is the largest waterfall in the Iberian Peninsula. It originates from the confluence of the Iturrigutxi, Urita Ajiturri and adjacent streams. This waterfall is seasonal and only runs for about two months a year, either during the rainy season or during melting of the snow. The waterfall is located on the border of the province of Burgos and Álava. The easiest way to access the area is from Berberana or from the port of Orduña. The traveller can listen to the tumultuous sound of the waterfall crushing against the rocks. This is a powerful natural spot that provides the thrill of real adventure. 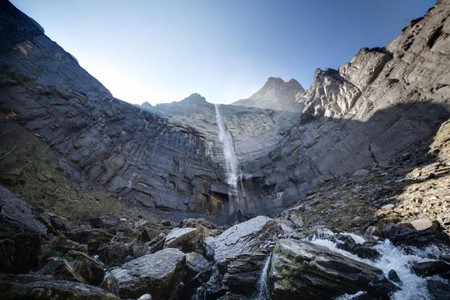 The Irati Forest is divided between northern Navarra (Spain) and Pyrenees Atlantiques in southwest France. The Spanish part is located in the valley of Irati River, between the mountains of Roncesvalles Orzanzurieta in the west, and Mount Orhi in the east. It is the largest forest in Navarre and one of the largest and best preserved beech and fir tree reserves in Europe. Within the forest there are several protected areas. A walk in the forest will evoke a multitude of sensations: you’ll feel one with nature as you enjoy the wild sound of the water between beeches and firs, the freshness of the Irati’s cool waters, and the elusive sounds of animals. 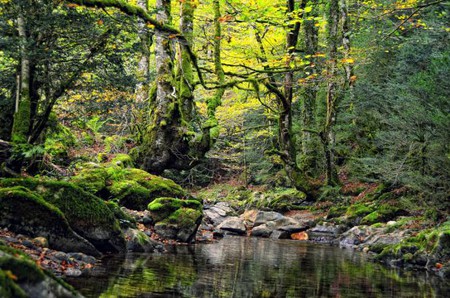 San Adrian Tunnel, known also as Lizarette, is one of the most iconic routes in the Basque country. It is made from the natural erosion of the rock and has two openings, one on the north side and on the south side. It contains a hermitage inside and in past times shepherds used this mountain pass to move the cattle to neighbouring cities. Today, it is a popular trekking destination for hikers who want to access the neighbouring peaks: Aratz, Aizkorri, and Urbia. The surrounding area contains vast beech forests and limestone rocks. 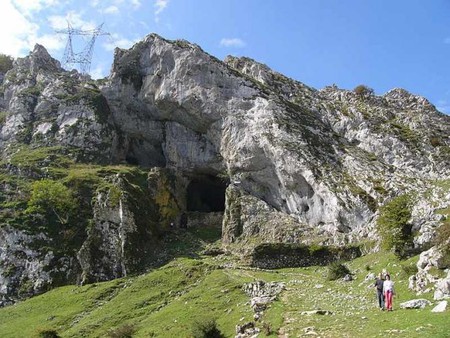 Hernio is one of the most iconic mountain summits in the Basque country, located at the heart of Gipuzkoa. It is 1075 meters high and has three villages at its base: Erezzil, Alikza and Asteasu. This is a popular tourist destination with beautiful vistas. The forests abound with oak, chestnut and beech trees, giving the place a very enchanting aura. There is also an interesting Altxerri grotto in which wall paintings and rock carvings of bison, horses, fishes can be found, which shows that the area has been occupied since antiquity. 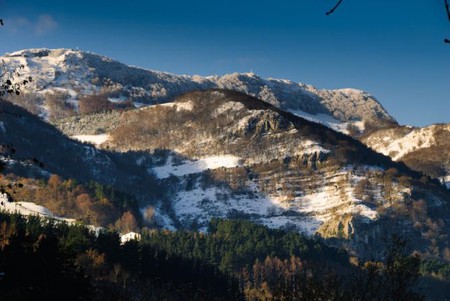 Tologorri, also called Iturrigorri, is a 1066 meters summit in the Salvada mountains. Its imposing rocky outcrop dominates the valley. The most interesting ascend to the summit starts from Lendoño Goikoa (441m), from where a magnificent view of the peak can be seen. The busiest route to the summit is called “Black Path”. The Salvada mountains are enveloped in a nostalgic aura. There are many beautiful springs and natural wonders the visitor is bound to encounter during the trek. 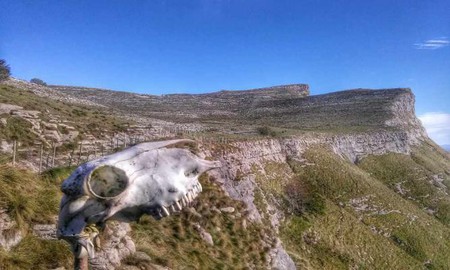 This spectacular gorge in the midst of the mountains is accessible from the small village of Itxassou located in the French part of Basque country. It is named after Roland, the nephew of Charlemagne who, in August 778, gathered an army to invade the Basques. According to the legend, at the height of Itxassou he found an impenetrable rock. He drew his sword and carved an opening which allowed the army to pass. He left a footprint on the rock and soon afterwards died in battle. Today, this marvelous gorge, surrounded by gushing rivers, dramatic cliffs and rocky mountains, is one of the lost paradises of the Basque country. 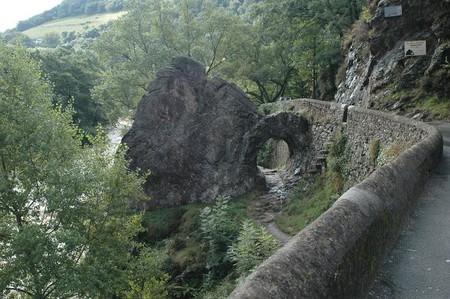 The gorge of Lumbier

The gorge of Lumbier is carved out of limestone rock by the river Irati at the far side of the Leyre mountains in the Pyrenees. It is one of the most spectacular gorges in the world which, according to the legend, was built by two devils. Its 1.3 kilometers can be walked as a single path that runs along the river. The rock formations are astonishingly beautiful and the griffon vultures which hover over the cliffs offer a marvelous sight for bird watchers. The beauty of this natural enclave is enchanting. 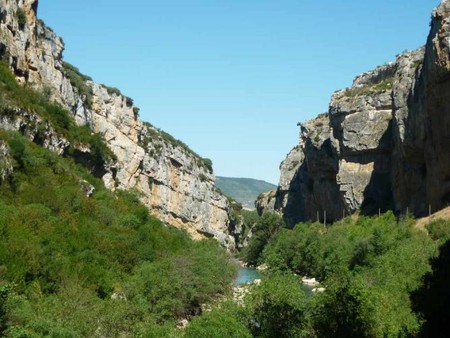 The Gorge of Lumbier | © Albert Torello/Flickr

Kakouetta is a 4.5 kilometers gorge formed by the river Uhaitza. It is located in the French part of Basque Country, in the western side of the Pyrenees, and it is considered to be one of the most beautiful places in the mountain range. Kakouetta emerges from the hill of Urdaite near Isaba. This narrow gorge is filled with limestone caves and waterfalls. It was first explored in 1906 by Édouard-Alfred Martel, and travelers can still walk inside this amazing marvel of nature. The gorge has a lot to offer: with its many mysterious caves, suspended bridges and gushing waterfalls, it is the ideal place for an unforgettable adventure. 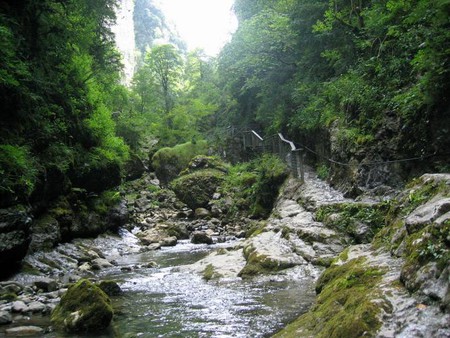