The 10 Most Beautiful Churches in Spain 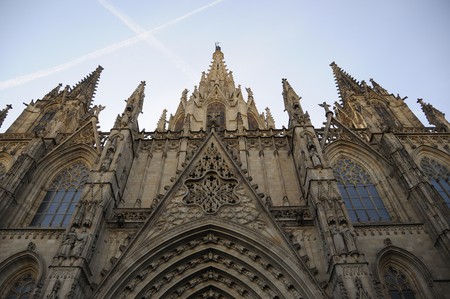 Spain, a country with a strong Catholic background, is full of marvelous churches and cathedrals. Here’s a list of 10 of the most beautiful.

It is generally acknowledged that Santiago de Compostela‘s cathedral is one of the greatest architectural masterpieces of Spain. The activities around the cathedral played a major role in Europe during the Middle Ages. One legend posits the cathedral was associated with the apostle James whose relics had been brought from Jerusalem by a boat of angels. They were discovered a few centuries later by a hermit, Pelagius, and the place became a sacred seat where initially a small church was built. The cathedral was built in an astonishingly rich baroque style. It has long attracted pilgrims from all corners of the world, with the popular pilgrimage route being known as the Camino de Santiago or Way of St. James.

Book Now
Seville Cathedral, also known as the Cathedral of Saint Mary of the Sea, is the largest gothic cathedral in the world with a beauty that surpasses all expectations. This architectural marvel, completed in the early 16th century, stands in full glory in the middle of the sprawling city of Seville. According to chronicles about the cathedral, the architects thought, ‘the church was built so beautiful and so grand that those who see it finished will think we are mad’. The cathedral is also the burial site for Christopher Columbus.
Open In Google Maps
s/n Avenida de la Constitución, Sevilla, Andalucía, 41004, Spain
+34902099692
Visit Website
Give us feedback 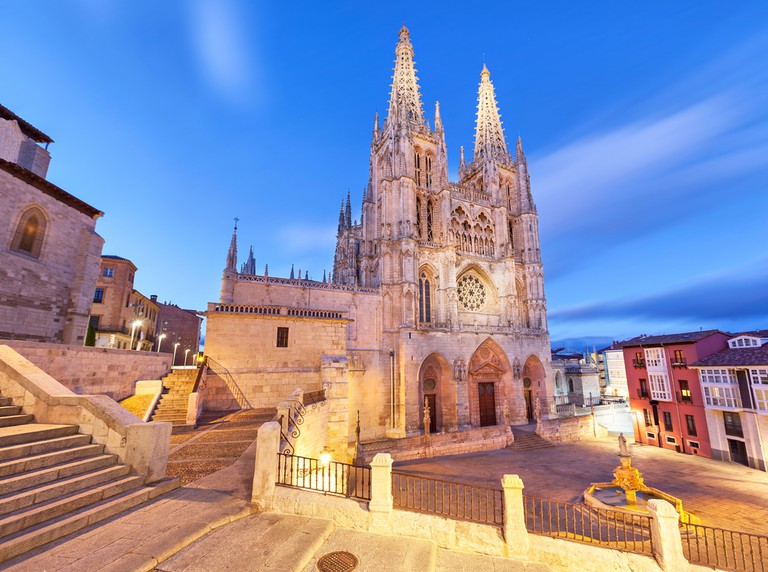 Burgos Cathedral, Spain | © Sergey Dzyuba/Shutterstock
The impressive gothic cathedral in Burgos is a symbol of architectural sophistication that will astonish visitors with its delicate charm. The cathedral is dedicated to the Virgin Mary. It was initially commissioned in the 13th century by King Ferdinand III of Castile and completed in the 16th century. The dazzling building comprises octagonal spires and ogival arched framing. There are also dozens of open stonework traceries with stunning sculpture works.
Open In Google Maps
Plaza de Santa María, Burgos, Spain
+34947204712
Visit Website
Give us feedback

The city of Leon located in the north-west of Spain is known for its gothic cathedral. This majestic building was built in the 13th century on the ruins of Roman baths and is better known as the House of Light or Pulchra Leonia. Much of the cathedral is a treasure of gothic architecture. It hosts an art collection that includes almost 1,500 pieces of romanesque and neoclassical artworks. The memory of the past lingers in its majestic walls, grand towers and magical stained-glass windows. This is one of the three most important stops on the Way of St James. 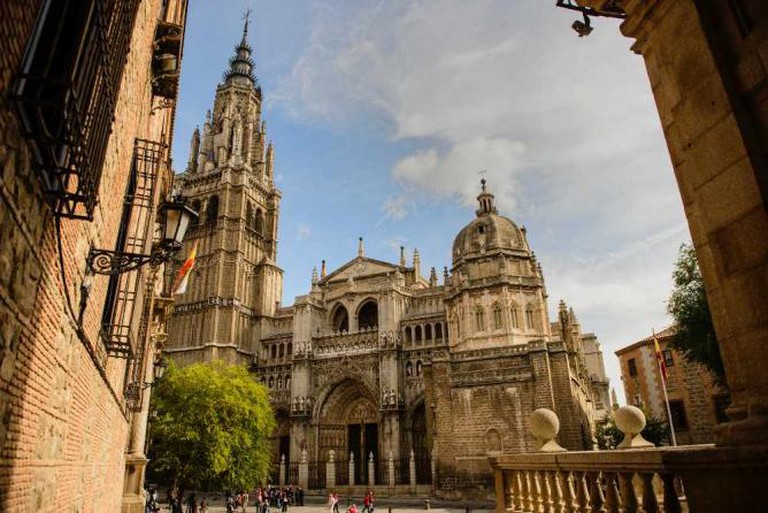 Toledo Cathedral | © Son of Groucho/Flickr
It would be hard to deny the fairy tale charm of the Cathedral of Saint Mary of Toledo, considered by some as the magnum opus of gothic-style architecture. The cathedral was commissioned in the 13th century by Ferdinand III of Castile and was completed two centuries later. This architectural marvel built with white limestone is best known for the light which streams in from open vaults, which gives the whole place an otherworldly appearance. It is recommended to visit the Cathedral Treasury – it houses an incredible collection of precious stones.
Open In Google Maps
1 Calle Cardenal Cisneros, Toledo, Toledo, 45002, Spain
+34925222241
Visit Website
Give us feedback

The history of Cadiz Cathedral dates back to the 18th century, when it was built as a memorandum of the trade relationship between America and Spain. The place was named the Cathedral of the Americas. The cathedral’s vibrant architectural mix is reflected in many ways in the curious combination of a grand gothic style intertwined with rococo and neoclassical styles. The place was built by architect Vincenzo Acero, who also built the Cathedral of Granada. The golden dome towering majestically above the entire construction is the most recognizable element of the cathedral; it makes a lasting impression on visitors to the site.
Open In Google Maps
s/n Plaza de la Catedral, Cádiz, Andalucía, 11005, Spain
+34956286620
Visit Website
Give us feedback

Basilica of Our Lady of the Pillar

The Basilica of Our Lady of the Pillar located in Zaragoza is one of the most famous religious buildings in Spain. The Lady of the Pillar was considered by Pope John II to be the Mother of the Hispanic Peoples, hence the importance of the figure. Legend has it that the church was built by St. James who brought Christianity to Spain after he had an apparition of Saint Mary. The basilica reflects an interesting mix of architectural styles: baroque, neoclassical and rococo. The church is also famous for containing frescoes painted by Francisco Goya – one of the most influential Spanish artists of all times.

Basilica of Our Lady of the Pillar, Plaza del Pilar, Zaragoza, Spain

The Granada Cathedral, better known as the Cathedral of the Incarnation, stands out for its imposing, magnificent structure. Originally planned as the royal mausoleum of Charles I of Spain, it later changed to have religious purposes; however, its stunning majesty is apparent to every visitor. The cathedral displays royal features such as triumphal arches, pillars and Corinthian columns. The building beautifully blends different architectural styles. Its circular elements are inspired by the idea of a ‘perfect building’ elaborated in Alberti’s works. 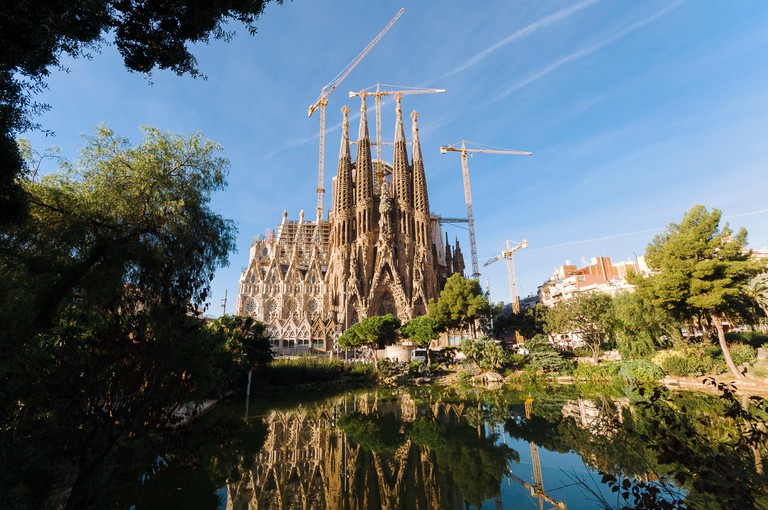 The Sagrada Família is an architectural masterpiece by Antoni Gaudí | © Roland Nagy / Alamy Stock Photo
Book Now
Among Spain’s churches, the Sagrada Familia in Barcelona is one of the most iconic and original. It took some time to convince the pope to sponsor the building. But, once it was approved, the internationally acclaimed Catalan architect and visionary Antoni Gaudi began his enormous project in 1882; it’s still unfinished and being constructed today. With its innovative architectural style, which combines gothic and Art-Nouveau elements, Sagrada Familia has taken a well-deserved place as one of the most extraordinary architectural marvels of all times. People travel from all over the world to see the building, and it has come to be one of Barcelona’s main sights. The Basilica is expected to be completed in 2026 – the year of the centenary of Gaudi’s death.
Open In Google Maps
401 Carrer de Mallorca, Barcelona, Barcelona, 8013, Spain
+34932080414
Visit Website
Give us feedback

The Mosque-Cathedral of Córdoba, located in the picturesque region of Andalusia, is a fascinating example of history becoming entangled. The building is believed to have originally been a Catholic church, which later, in the early 8th century, shared between Muslims and Christians during the Muslim conquest of Spain. Later it became a solely Muslim site and the grand mosque of Córdoba was built in the grounds, becoming one of the best examples of Moorish architecture. With the Reconquista the building was turned into a Roman Catholic church and a renaissance cathedral nave was added in the 16th century. The Cordoba Cathedral is known for its design, which reflects Moorish architectural style at its best, with decorative tile work, graceful arches and soaring domes. The place remains one of the most religious-historic wonders of the world.