Pan con tomate | © Ewan Munro/Flickr
Sants, a former industrial town bordering Barcelona known as Santa Maria de Sants, is a lively neighbourhood with a local feel to it in the southern part of the city. The district hosts a multitude of excellent traditional and modern eateries, bars and cafés. Here’s our pick of the top 10 worthy tapas bars to visit when in Sants.

Considered to be one of the hidden gems of Sants, this restaurant boasts a fusion of Basque and Catalan food cultures, seasonal fresh produce and an extensive bar of hot and cold pintxos and crafted desserts. Named after the town of the Basque country, Zarautz may look like a typical Basque tavern but their love of food and wine culture is unmistakable. Locals love the quality fresh produce along with the carefully planned menu and well-paired wine suggestions, which have given it the reputation it has today.

Bar, Restaurant, Spanish
Terra d’Escudella is a quirky, unpretentious style co-op tucked away in the middle of Sants, which is loved by locals and students. Expect a very Catalan menu and hearty portions with a wide selection of craft and IPA beers. This is not a tourist bar, so you’ll definitely want to brush up on your Spanish (even better Catalan) before you go, however there is an English menu if you ask. The midday set menu is a steal at and expect the place to fill fast after 10pm. If you prefer a more modern and local experience, this is a definite must visit.
More Info
Open In Google Maps
20 Carrer de Premià, Barcelona, Catalunya, 8014, Spain
+34934221613
View menu
Visit website
Visit Facebook page
Send an Email
Give us feedback

Away from the tourist end of Plaça Espanya, Homo Sibaris is another great local choice. Plaça d’Osca has all the charm of Gràcia with a very local crowd. The environment on the terrace is perfect if you are lucky enough to get a table on the weekends or evenings. Homo Sibaris is really known for its craft beer culture, but expect a great wine selection and excellent tapas too. 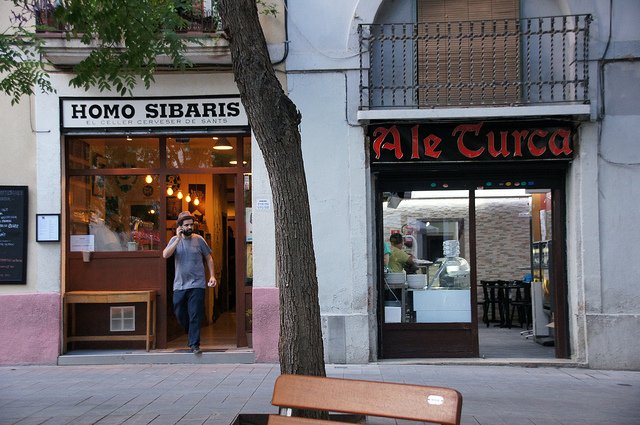 Restaurant, Bodega, Spanish, Tapas, Dessert, $$$
Bodega Monumental has been open since 1937, providing a traditional family-style restaurant with a romantic, unchanged quality. Right near the mercat of Hostafrancs, you can expect to find an array of traditional Catalan dishes and desserts with an excellent value wine list and traditional vermouth. Locals of all ages love the tapas here. Service is the other reason Bodega Monumental is such an old favorite, as its genuinely warm hospitality and engaging waiters make you feel right at home.
More Info
Open In Google Maps
87 Carrer de la Creu Coberta, Barcelona, Catalunya, 8014, Spain
+34934324116
View menu
Visit website
Visit Facebook page
Send an Email
Give us feedback

A local favorite of Sants in Plaça d’Osca is La Mestressa. Here you’ll find great value for money tapas dishes and word has it that they do a decent vegan burger. People really do come here for the combination of food, value for money and atmosphere. It’s a firm favorite for tapas and burgers amongst a young, hip crowd and has a genuinely local vibe. Service can be a little slow at peak times, so plan to arrive before 10pm to make sure of getting a table or you’ll have to wait. 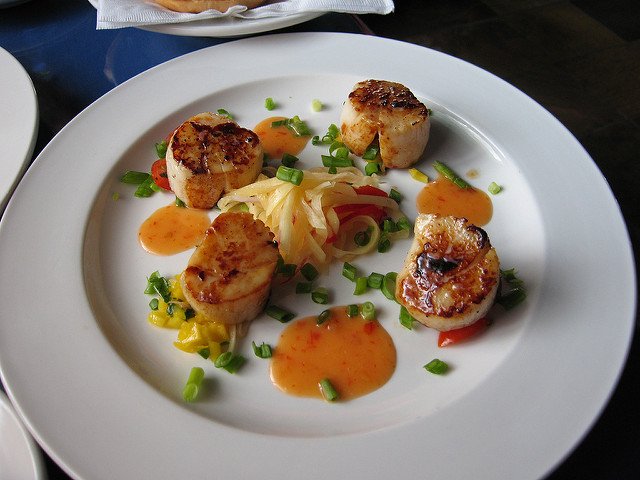 Restaurant, Spanish, Contemporary, $$$
A short walk from the Plaça de Sants station, off Passeig de Sant Antoni you’ll find the home of Pan & Oli. With its modest contemporary twist on tapas, you can see why Pan & Oli is such a favourite amongst locals and visitors. The relaxed atmosphere and quality service make Pan & Oli just what you want from a local restaurant. Portions are small but incredibly tasty. This places does high quality food at value for money prices.
More Info
Open In Google Maps
30 Carrer de Galileu, Barcelona, Catalunya, 8028, Spain
+34931401853
View menu
Visit website
Visit Facebook page
Send an Email
Give us feedback

A recent addition to the Sants neighbourhood, this cozy tapas bar is run by three friends who share a passion for food cooked and warm, friendly service. Located just beside the Sants market, it’s no surprise that the menu at Lute changes regularly depending on what the chef has found across the road. New as it may be, the locals have already made it a regular stop-off point for their weekend tapeo.

Market, Restaurant, Bar, Pub Grub, Spanish, Seafood, $$$
Not one for those looking for a hipster hang-out, Cal Pep is one of Sants’ most authentic and established tapas bars. Another restaurant conveniently located across the road from the market, this traditional bodega is famed for its seafood and fish tapas, everything from sea snails to razor clams. If you want to speak to Cal Pep you’ll have to pick up the phone or make your way there (try tying it in with time for a vermouth on Sunday).
More Info
Open In Google Maps
12 Carrer de Canalejas, Barcelona, Catalunya, 8028, Spain
+34933393037
View menu
Visit website
Visit Facebook page
Send an Email
Give us feedback

Old meets new in this cheerful neighborhood haunt. First opened in 1965, Bodega Montferry was run by the same couple until 2013 when three young locals decided to take it on. Luckily they managed to preserve the building’s soul and inject it with the slight touch of the modernity it needed. Expect artisan beers alongside traditional Catalan dishes such as cap i pota (a typical offal stew). This place is living proof that things built in the old days were made to last.

Bar, Pub Grub, Spanish
An example of regeneration in Sants, Bar Salvat changed hands a couple of years ago and since then the owners have been working hard to maintain all the charm of this local favorite. This includes sticking with the quasi-religious screening of football matches on a Sunday and healthy servings of vermouth on a Sunday. If you’re feeling peckish, don’t miss your chance to try some of the best anchovies in town.
More Info
Open In Google Maps
2 Carrer d'Andalusia, Barcelona, Catalunya, 8014, Spain
+34600578099
View menu
Visit website
Visit Facebook page
Send an Email
Give us feedback
Give us feedback