The 10 Best Restaurants In Toledo, Spain

Toledo | © eugene_o/Flickr
Toledo is a beautiful city situated a short train-ride away from Madrid. The Royal Court was established here for a long time, and the city and its customs had an immense impact on Spanish culture. It is called the ‘city of the three cultures’ because Jews, Muslims and Christians lived here together peacefully for many centuries. Its cuisine has assimilated all these influences, making it an exciting place for foodies. Here we explore the best restaurants in Toledo.

Restaurant, Mediterranean, Spanish, European, $$$
Tobiko | © Quinn Dombrowski/Flickr
Tobiko is the Japanese term for flying fish roe, an ingredient that is often used to make sushi. Restaurante Tobiko defines itself as a restaurant of ‘modern European cuisine’, mixing Spanish cuisine with outside influences, as its name suggests. There is a set menu for 20 euros, which changes every once in a while to accommodate the use of fresh, seasonal ingredients. The price is very good value for the quantity and the quality of the food they serve, and the service is excellent.
More Info
Open In Google Maps
27 Ronda Buenavista, Toledo, Castilla-La Mancha, 45005, Spain
+34925210589
Visit website

Restaurante Adolfo is one of the finest restaurants in Toledo and it is located next to the cathedral, in a 12th century Jewish house. Here visitors can pick individual dishes from the menu, such as the traditional lechazo or cordero, or try the chef’s excellent degustation menu, that consists of a variety of plates with different and exciting combinations of flavors and textures. It is an impeccable place to dine, with elegant and elaborate cuisine served in a friendly and unassuming manner. They also have a more modern terrace where visitors can enjoy one of their delicious gin and tonics and splendid views of the city. 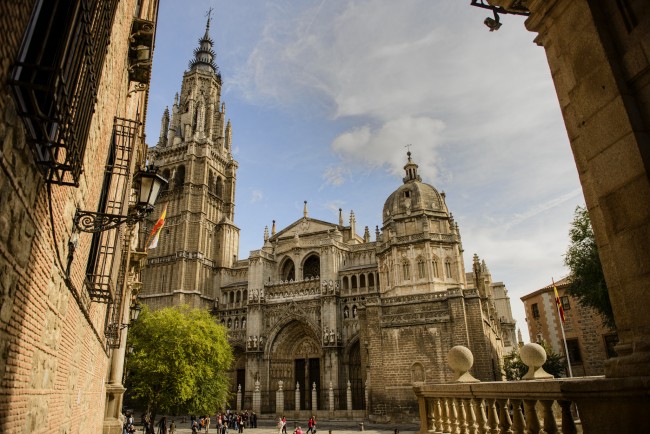 La Abadia is located in a beautiful establishment in the center of Toledo, with an old, arched structure, and is known for its great food. The interior is divided in different sections, and diners can choose where they want to sit. The menu is concise and of top quality. The value is very good, as visitors get big portions of delicious food at very decent prices. Diners who come here have various options, they can either choose something from the menu, or go with one of the set menus: an express menu and a degustation menu are offered.

Diner, Restaurant, Spanish
Not your typical Spanish restaurant, Patata y Olé! is a fun, unique place to go for a meal in Toledo. It is a fast-food diner, and most of what they have to offer is based on their central ingredient; potatoes (patata). They have a great variety of potatoes stuffed with original combinations of ingredients, which will make for a quick yet complete meal. For those who do not like potatoes, this unique establishment also serves nuggets and other meat-based options.
More Info
Open In Google Maps
Toledo, Castile-La Mancha, 45003, Spain
Visit Facebook page

Casa Valero specializes in seafood, and serves exquisite dishes made with ingredients of the utmost quality. Their bar does not disappoint either, as they have an excellent selection of wines and beers. Visitors can sit at the bar and have a few tapas, or have a formal meal in their dining room. Even though it is a short ride away from the historic center of Toledo, it is worth exploring the outskirts of the city for this gem.

Restaurant, Spanish, Mediterranean, $$$
Hierbabuena (meaning peppermint) has a privileged location and some of the best views in all of Toledo, not of the city itself but of the valley around it. The terrace is delightful, very tastefully decorated. The innovative cuisine and combination of flavors makes this restaurant stand out as one of the best in the city; despite the fact that it is not in the historic center, it is definitely worth a visit.
More Info
Open In Google Maps
1 Carretera Circunvalación, Toledo, Castilla-La Mancha, 45003, Spain
+34925223924
Visit website

Restaurant, Diner, Spanish, Seafood, $$$
A glass of wine | © Denise Mattox / Flickr
La Mar Salá is a top-notch restaurant in Toledo, and its specialties are incredible rice and seafood-based dishes. This diner uses only the best ingredients in the preparation of their plates, as they insist that the quality of the food depends on it. Their wine list is admirable, and paired with the great service, this restaurant will not be easily forgotten. It is a five-minute ride from the city center, and if you don’t want to walk at taxi can be hired for a reasonable price.
More Info
Open In Google Maps
9 Calle Honda, Toledo, Castilla-La Mancha, 45003, Spain
+34925254785
Visit website

Restaurant, Spanish, Mediterranean, Egyptian
Representative of Toledo’s multicultural history, this restaurant is situated in the city’s old town and serves tasty Middle Eastern food. The menu is not extensive because all of their dishes are homemade using fresh ingredients. The baklava is to die for, and anyone with a sweet tooth will remember it as one of the highlights of Alqahira’s cuisine. The decoration is outstanding too, imitating a typical Moorish restaurant.
Looks like it's closed Hours or services may be impacted due to Covid-19
More Info
Open In Google Maps
7 Calle Ciudad, Toledo, 45002, Spain

Close to the Museo Del Greco, La Fábrica de Harinas (meaning flour factory) is an elegant establishment that is part of San Juan de los Reyes, a four-star hotel. The suckling pig, one of Toledo’s specialties, is great here, and more affordable than elsewhere in the city. This restaurant also has an outdoor terrace for the warmer months, where visitors can enjoy a refreshing drink and snack on some of their inventive concoctions.

Restaurant, Spanish, $$$
Seafood Paella | © Marcelo Guido /Flickr
El Carmen de Montesion is located a short ride away from the city center, in the exclusive Montesion neighborhood, and it is Toledo’s only Michelin-starred restaurant. It is run by Pepe Rodriguez, a famous chef in Spain, known for his role as a member of the jury in Spain’s edition of MasterChef, along with his brother and two other chefs. They have a menu from which visitors can pick and choose what they want, or several set ones: the traditional menu, the classic menu and the seasonal degustation menu.
More Info
Open In Google Maps
s/n Carretera de la Puebla, Toledo, Castilla-La Mancha, 45004, Spain
+34925223674
Visit website