The 10 Best Kept Secrets in Valencia 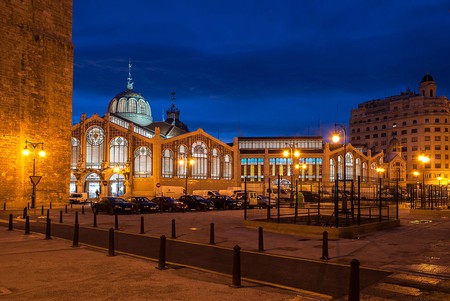 The atmospheric streets of Valencia’s Old Town certainly seem like they hold plenty of secrets, but the city as a whole is quite mysterious. Far from being an overrun tourist hub, even the local residents have to do a bit of digging to discover the coolest spots, the quirkiest attractions and most interesting events in town, as often they simply aren’t advertised. If you feel like getting off the beaten path and seeing something different, here are our suggestions for some attractions often overlooked.

Tucked away down a quiet backstreet in El Carmen, this pretty sight is missed by the vast majority of tourists and even some Valencians are unaware of it. The Portal de la Valldigna (Valldigna Gate) was built in 1400 as a gateway separating the Christian and Moorish areas of the city. Like other ruined parts of the Old City, the gateway was almost demolished last century, but eventually given protected status and restored in the 1940s. It was built next to the ancient Arab wall, a part of which still survives (though in dire need of restoration) between apartment buildings on the neighbouring Carrer de les Salines. 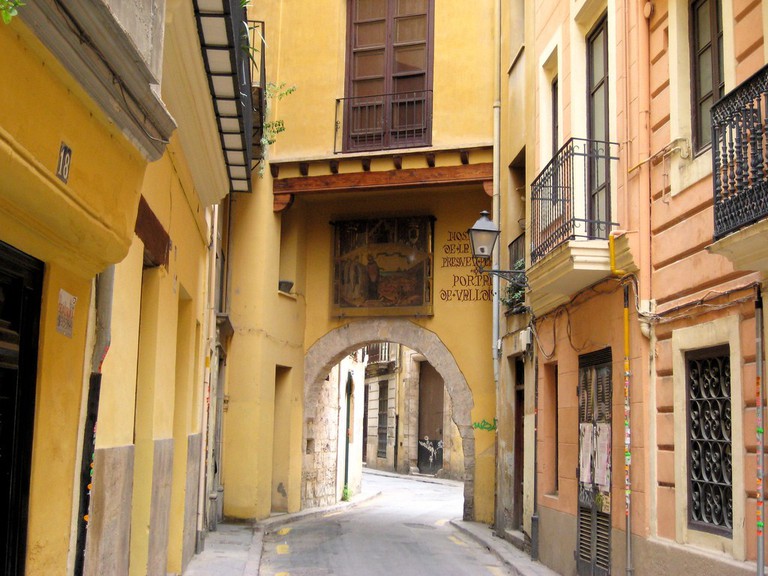 To see a piece of the city’s Moorish history, visit this Arab bath house, also known as Abd-al-Malik. It was built in the 13th century, shortly before the Catholic conquest of Valencia, and the entrance hall features mosaic tiles dating from that period. It’s the last remaining of ten original Arab bath houses that originally stood in the city.

Model of the walled city

If you want to know what Valencia looked like in its days as a walled city, check out the incredible scale model in the hall of the unconventional Valencian Museum of Illustration and Modernity, or MuVIM, The model, based on a plan made by Valencian scholar and cartographer Father Tosca, shows how the Valencian capital looked in the eighteenth century, a period known as the Enlightenment. All the model buildings (including 450 blocks of houses) were cut and hand-painted by master craftsmen. As well as the walls, the reconstruction displays the now demolished palace, a vast cathedral where the Town Hall Square now stands.

If you were paying attention to the scale model at the MuVim, you might have noticed a curious cross-shaped building close to where you were standing. Walk outside and through the pretty green area and you’ll see it – the ruins of a cross-shaped medieval hospital, with one of its tiny chapels still standing, surrounded by palms. It’s bordered by a large library and a busy road, but it’s a quiet spot hidden in plain sight.

The Dragon of the Patriarch

Monks still live at the Colegio del Patriarca (or Seminario del Corpus Christi) with its incredible fresco-covered interior. This building itself is something of a hidden treasure, but before entering the church you’ll spot one of the stranger adornments of any religious building – the so-called ‘Dragon of the Patriarch’. This stuffed crocodile is mounted on the wall over the holy water basin, watching over the entrance. According to legend, this ‘dragon’ lived in the Turia River and, during a flood, it emerged from the river and started terrorising the people of Valencia. A Jewish prisoner offered to capture the dragon in exchange for a pardon, he succeeded, and it was decidedc it should be stuffed and put up on a church wall. A far more likely story is that it was brought back from an early Spanish venture to Peru and placed in the Church as a symbol of silence, given that these creatures have no tongue. 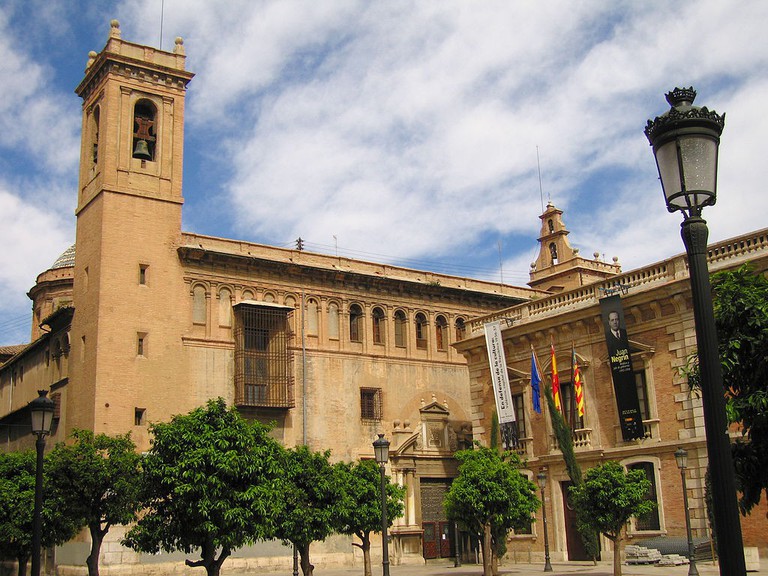 The parrot and the bird

Every visitor to Valencia must see the Central Market and the Cathedral of San Juan. But if you look up, you’ll see something most people miss. The central market’s parrot weather vane and the sparrow version atop San Juan are much-loved characters, often depicted in Valencian literature and folklore as observers of the city’s everyday life. 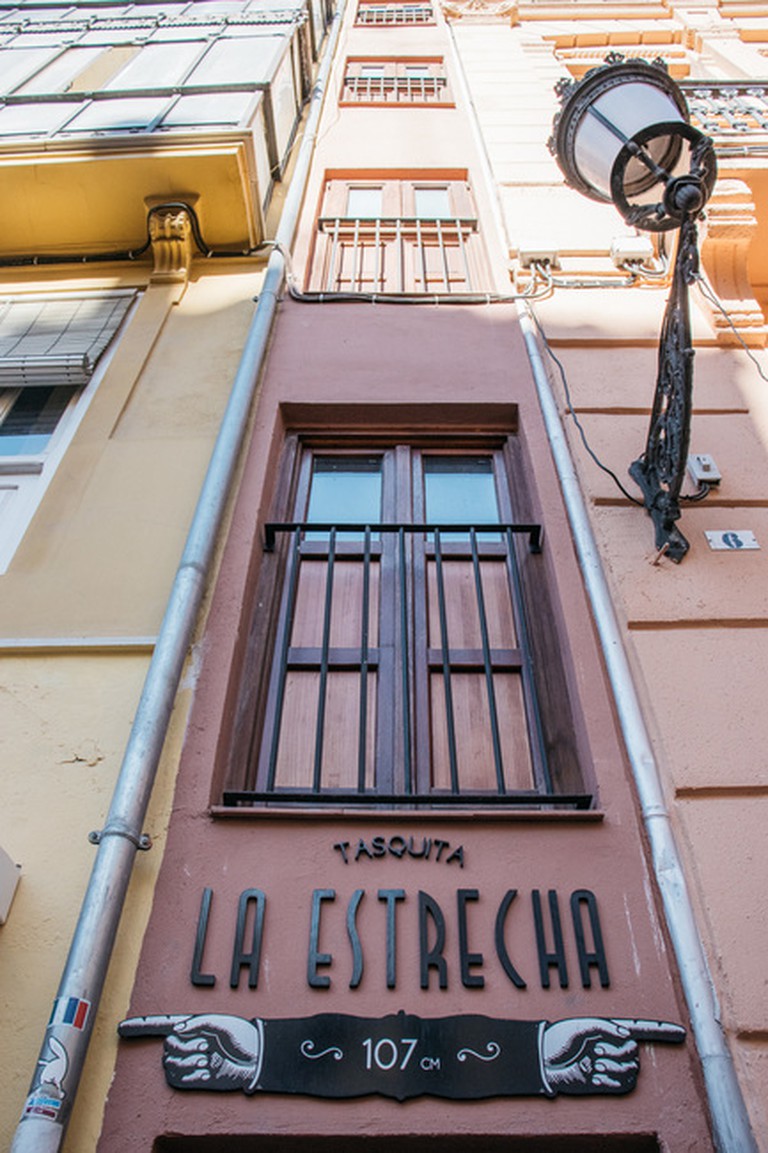 Jaser Cervantes | © Culture Trip
It seems like almost every city claims to be home to the narrowest house or building in the country, or continent. Valencia’s entry into this particular contest is said to be the narrowest building in Spain (link in Spanish) and one of the narrowest in the world. Just slightly wider than the front door at 107cm, the tiny construction seems like it was slipped in between the adjoining structures. Sadly you can no longer see the miniscule interior as it once was; the upper floors have been joined internally to make flats, though the facade remains the same. The entrance is now part of the tapas bar La Estrecha (meaning “the narrow”) next door, which keeps the original floor and a collection of old photos of the building. Find it behind the cathedral in the Plaza Lope de Vega.
Open In Google Maps
9 Plaça de Lope de Vega, València, Comunidad Valenciana, 46001, Spain
+34961141322
Give us feedback

Bar, Cafe, Pub Grub
Facebook
Email
Twitter
Pinterest
Copy link
Share
Map View
We’re all for getting out of the touristy areas and visiting local haunts. But sometimes it’s hard to be sure what kind of an area you may be wandering. However, this is one welcoming little spot for those who want to explore Valencia’s neighbourhoods. It’s well off the beaten path with warm, tasteful decor (and in Spain, that means no fruit machines or flourescent lighting!) plus good beer, lots of live music events and absolutely no other tourists to be found. It’s in a nondescript residential area near the north end of the Turia riverbed, just ten minutes’ walk from the historic centre.
Open In Google Maps
25 Carrer Navarro Cabanes, Valencia, Comunidad Valenciana, 46018, Spain
+34646910115
Visit Website
Visit Facebook page
Give us feedback

Free classical concerts are something you might hear about in Valencia, but they’re not easy to actually find. If you happen to be visiting on the last Monday of the month, don’t miss your chance to catch a free concert held inside a breathtakingly grand palace. The Palau de dos Aguas, built in 1740 by an aristocratic family, is famous for its stunning facade. They also hold concerts on other dates to mark special occasions, and you can check upcoming events on the website. You can still visit the palace at other times to see the impressive collection at the Ceramics Museum housed here.