The Best Hotels with Pools in Barcelona 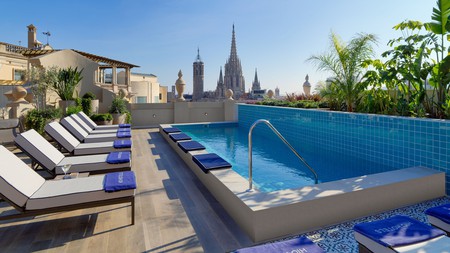 Visiting Barcelona – the cosmopolitan and creative capital of Spain’s Catalonia region – is hot work in spring and summer. What’s needed, then, are digs with a pool in which to cool off, and there’s no shortage of such places in this endlessly intriguing city. From plunge pools overlooking infamous Modernist architecture to luxury spas with relaxing water circuits, here are the best hotels with pools in Barcelona. 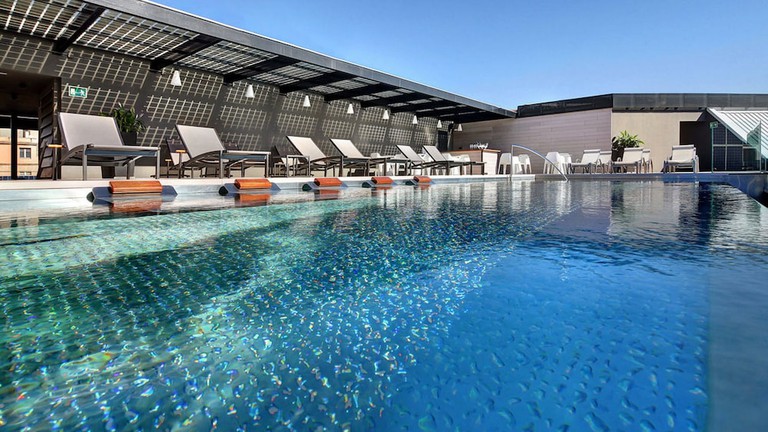 Courtesy of Olivia Balmes Hotel / Expedia
View Rooms
The four-star Olivia Balmes is situated in the heart of Eixample, a smart district packed with traffic and designer outlets. Guests are guaranteed a peaceful stay by modern, fully soundproofed rooms, which look out over the city and let in tonnes of natural light. The rooftop infinity pool is small, but provides the perfect spot from which to look out over the Catalan capital with a cocktail; above it, with a view of the pool area, is a decent gym. Eat indoors or out on the terrace at Seventeen, an onsite restaurant specialising in Mediterranean and Catalan fare.
More info 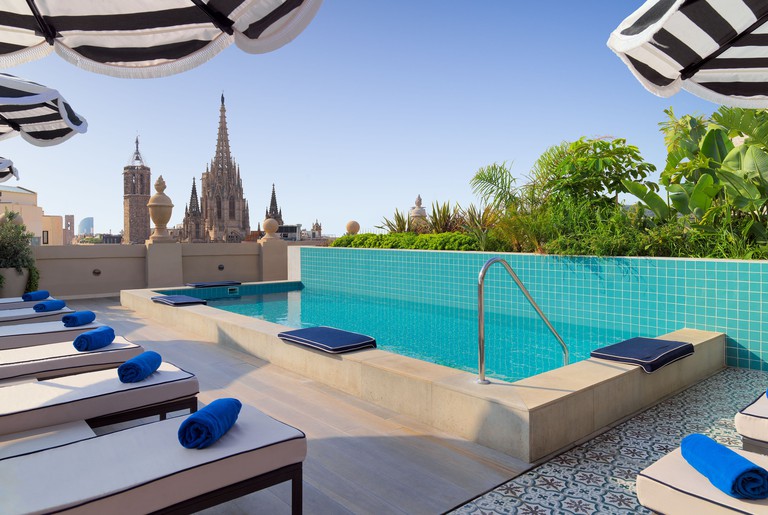 Courtesy of H10 Madison / Expedia
View Rooms
Sunbathe and/or cool off on a rooftop terrace with a plunge pool and views of the Gothic quarter, Barcelona’s most famous neighbourhood. Located just up the road from the Cathedral (check out the gargoyles on the nineteenth century facade), its pale-hued rooms are set in a restored early-20th-century building and range in size from Classics to Junior Suites: all are soundproofed and have Rituals bathroom amenities. You’re within easy walking distance of the Gothic Quarter’s major attractions, including Plaça de Sant Jaume and La Rambla.
More info 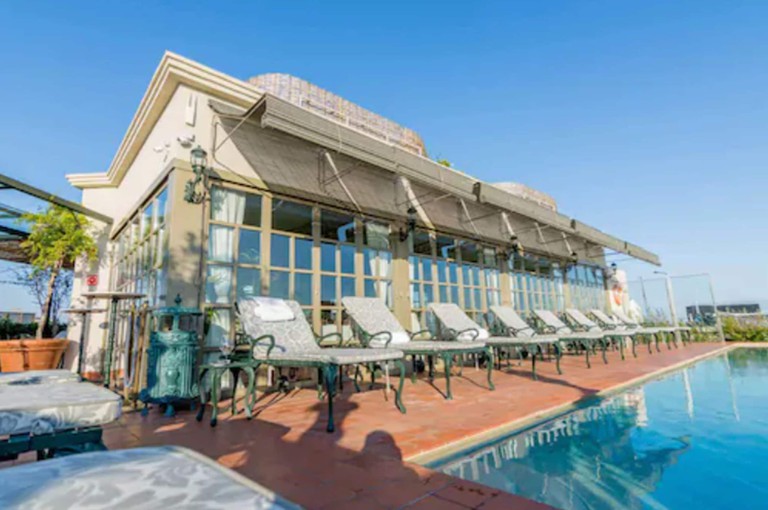 Courtesy of El Palace / Expedia
View Rooms
A top-floor terrace and pool are just two of the perks of a stay at El Palace, which first opened its doors as Barcelona’s Ritz in 1919. Other treats include a guide on how to experience Barcelona like a local, free use of two smart cars, all-inclusive romance, wine and sailing packages and access to the Mayan Luxury Spa. Accommodations start with classic doubles and culminate in a series of designer suites inspired by former guests such as Salvador Dali and Ronnie Wood (the latter of whom actually helped design the room named after him).
More info 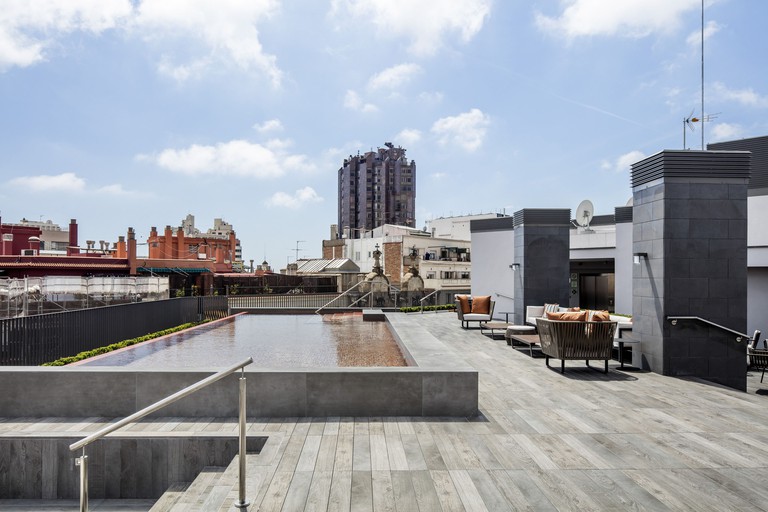 Courtesy of Midtown Apartments / Expedia
View Rooms
Midtown Apartments offers one-, two- and three-bedroom flats accommodating up to six guests, in a late-19th-century building that once housed a prominent Catalan family. Self caterers will find everything they need in these urban-chic accommodations – from fully-equipped kitchens to generously-sized living rooms – as well as access to a rooftop pool with views over the Eixample district and secure private parking (which can be extremely difficult to find in central Barcelona). Gaudi’s curvy Casa Batllo and his towering masterpiece, the Sagrada Familia, are both within 20-minute walks.
More info 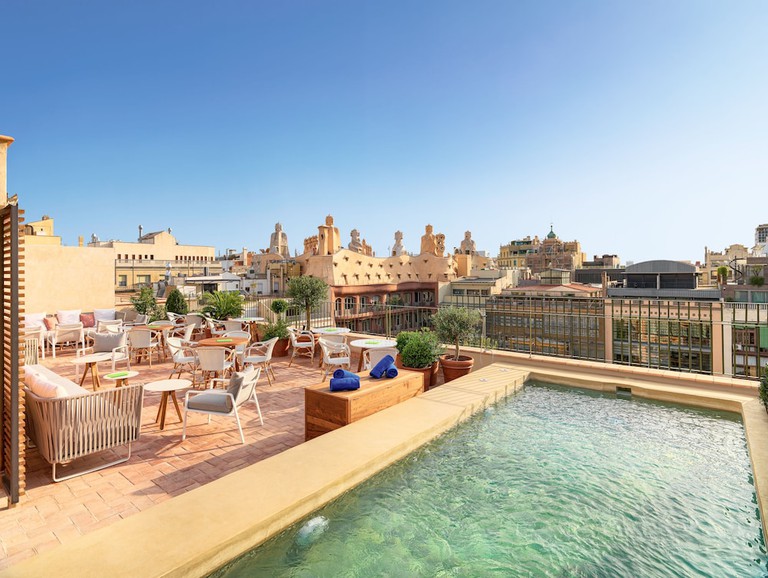 Courtesy of H10 Casa Mimosa / Expedia
View Rooms
Admire La Pedrera from a rooftop pool at the H10 Casa Mimosa, housed in a listed 19th-century building a few doors down from Gaudi’s famous creation. The rooftop bar, El Cel de Gaudi, is also the perfect spot from which to admire La Pedrera at night, when its surrealist designs are subtly illuminated. There’s another pool in a ground-level garden, next door to the onsite El Til-ler bar and restaurant, where an extensive wine and cocktail offering compliments a menu of Spanish classics. Rooms come in seven sizes, feature arty black-and-white photos of the building and are freshened with flowers every day.
More info 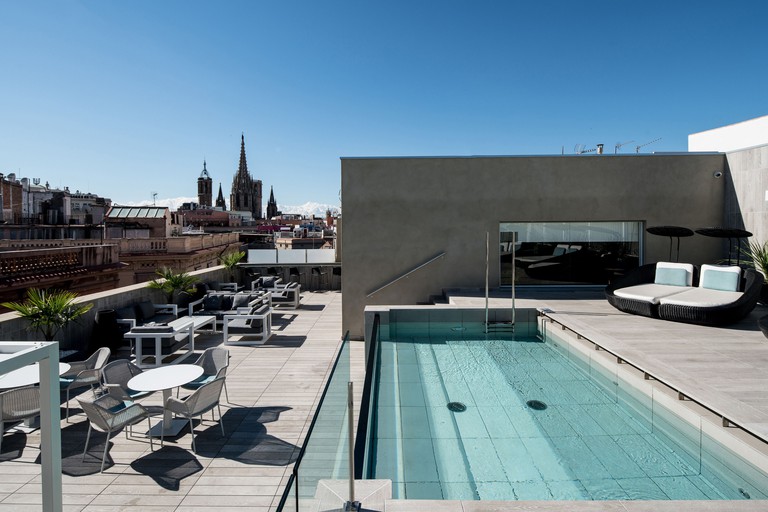 Courtesy of Catalonia Magdalenes / Expedia
View Rooms
Facing out towards the Cathedral, the rooftop terrace features sleek black loungers and a pool half-encased by glass. Next door is a bar from which you can order cocktails, tapas and light bites – or you could head to the buffet, where a selection of complimentary snacks are laid out every day between 2pm and 11pm. Spotless, modern rooms sleep up to four and provide a well-appointed base from which to explore either the Gothic Quarter or Eixample, which lie to the south and north of the hotel, respectively.
More info 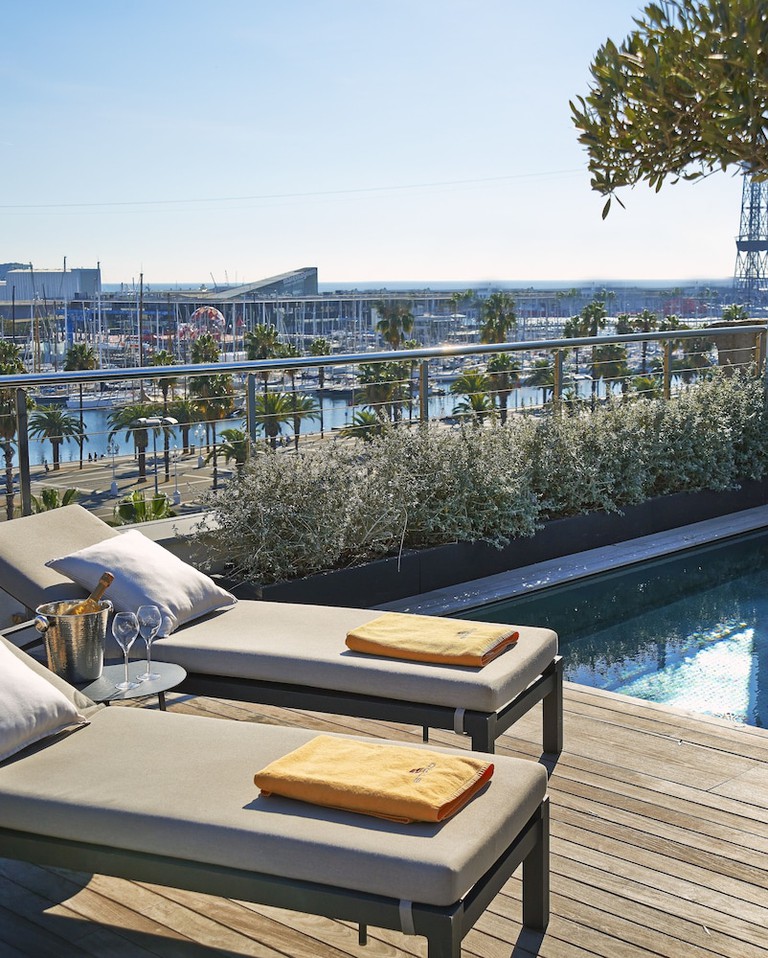 Courtesy of The Serras Hotel / Expedia
View Rooms
For views over the gleaming yachts of Barcelona’s Port Vell Marina, take a room or suite at The Serras, housed in a 19th-century building in which Picasso had his first studio in 1896, aged just fifteen. Some rooms also look over the marina, others over lively Merce Street. Up on top, there’s a pool, a live DJ on summer weekends and a lunch and dinner menu created by Michelin-starred chef Marc Gascons. Special packages include a tasting menu, guided tours of Picasso’s Barcelona (including tickets to the Picasso Museum) and sailing and golfing excursions.
More info 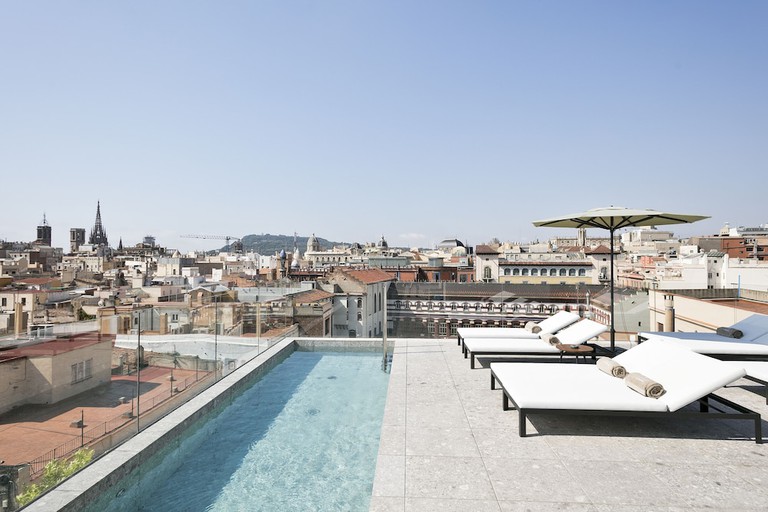 Courtesy of Yurbban Passage Hotel & Spa / Expedia | Courtesy of Yurbban Passage Hotel & Spa / Expedia
View Rooms
Stay in an elegantly-restored former textile factory, located a couple of blocks away from the Plaça de Catalunya. Communal spaces include a high-tech kitchen used for parties, meetings and cooking demonstrations, and a rooftop terrace with a rectangular pool, from which you survey the whole of Barcelona. There’s also an indoor pool in the spa, where you can pamper yourself with water circuits or treatments using organic and vegan products. Rooms feature clean lines and designer furniture, and some have balconies with views of the local neighbourhood.
More info 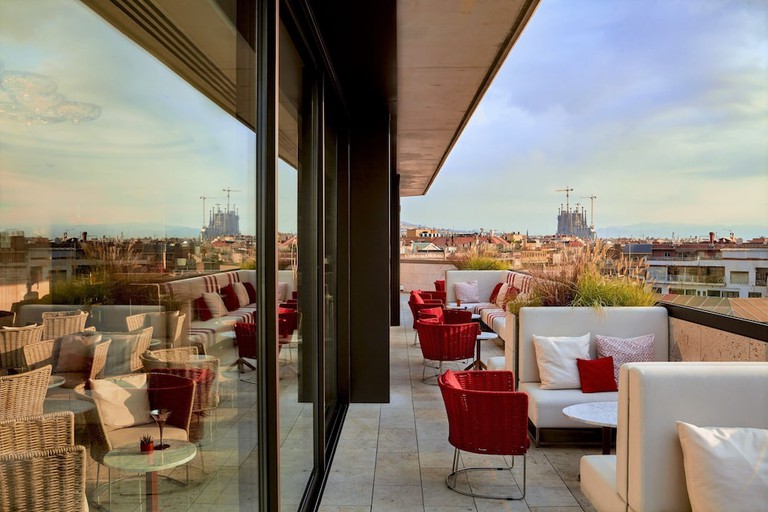 Courtesy of Almanac Barcelona / Expedia
View Rooms
The serious, businessy Almanac is situated on the corner of two of Eixample’s busiest thoroughfares – but there’s hardly any noise in the rooms, which wear warm, autumnal colours and feature sofas set into windowboxes overhanging the street. In-room preferences, from the curtains to the temperature, are controlled from a handy bedside keypad, and some rooms have Juliet balconies. The onsite offering is top-flight, comprising a restaurant run by Michelin-starred chef Rodrigo de la Calle and a rooftop cocktail bar and plunge pool where Saturday morning yoga classes are held.
More info 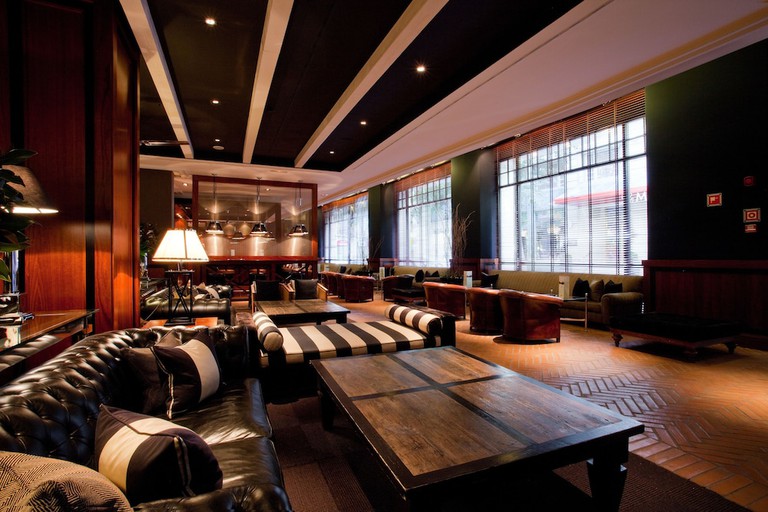 Courtesy of Hotel 1898 / Expedia
View Rooms
Accommodation in central Barcelona doesn’t come much grander or better-appointed than at Hotel 1898, a four-star operation on the city’s infamous Ramblas. Built in 1891 and formerly home to the General Philippines Tobacco Company, the building still displays its heavy, marble-and-oak-dominated splendour, featuring a lobby and dining room that should, by rights, be shrouded in cigar smoke. The 20th century is represented by a sleek rooftop terrace with pool, a restaurant serving modern Catalan cuisine accompanied by Rambla views, and a luxury spa in what was once a basement coal bunker.
More info
Give us feedback