The 10 Best Cultural Hotels In Valencia

This popular seaside city in Spain boasts a lively and cosmopolitan atmosphere, while offering a huge range of things to see and do, from admiring the fantastic and modern architecture to visiting the older municipal and historical buildings scattered around the city, and, if you’re there at the right time, experiencing the captivating Fallas festival. Be sure to find the best place to stay during your time with our guide. 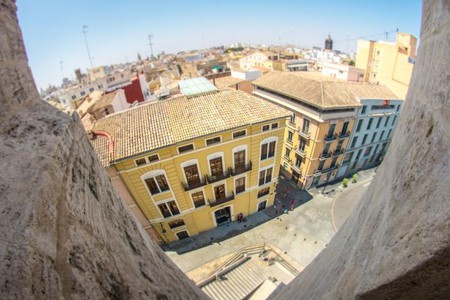 Boutique Hotel
4.3/5 (853 Reviews)
View Rooms
Right in the heart of the financial district of the city, SH Ingles hotel is located in the impressive and majestic building which was once the Palace of the Duke of Cardona, and dates back to the 18th century, so for tourists who want to feel a little bit like royalty, this historic hotel is the place. The hotel is surrounded by international names in the world of fashion and jewelry, so is a great location for those shopaholics, but also well suited to the avid sightseer, giving its proximity to the most important cultural sites Valencia has to offer. All 63 of the hotel’s rooms are quiet and comfortable, and guests have the choice of three different types of views. Complete with a restaurant, terrace café, and even a bar, it is a welcoming and well equipped hotel in a prime central location.
More info

A five star hotel situated in a majestic 19th century house, Hospes Palau de la Mar Hotel is a fantastic symbol of Valencia, a city in which design, art and style fuse together with history to great some iconic pieces of architecture. This exclusive hotel is located ideally located on one of the most beautiful and central streets of Valencia, with a grand exterior which makes for great photos. Inside, you can discover even more of the hotel’s beauty, including the attractive and modern patio, much reminiscent of a boat deck, which contrasts nicely with the historic and authentic architecture of the building. Guests are invited to enjoy the flower filled garden, before enjoying traditional Valencian cuisine in the on-site restaurant. All of the hotel’s rooms are tastefully decorated with wooden floors and marble bathrooms, giving them a contemporary and luxurious feel whilst still retaining the property’s antique charm. 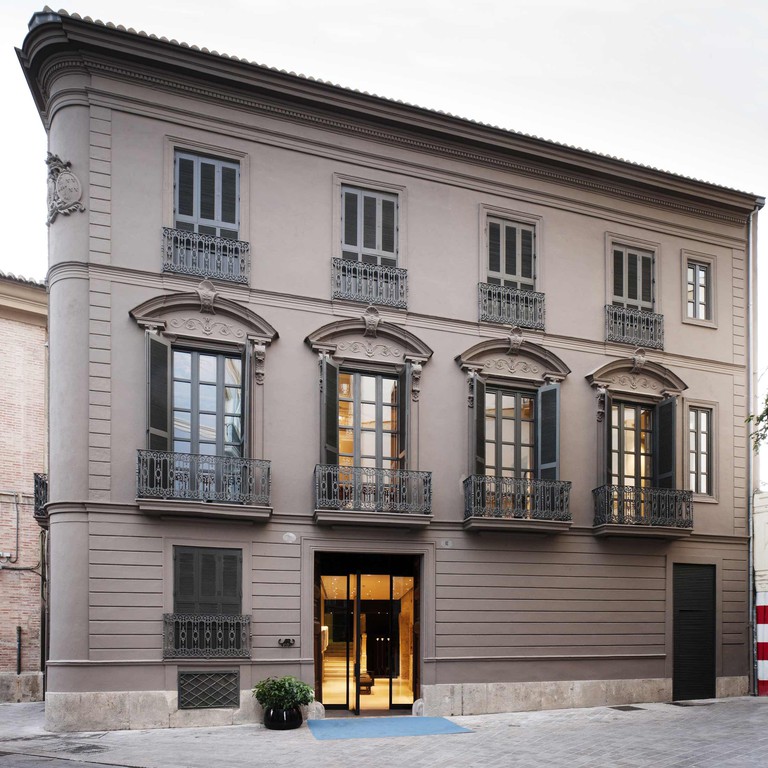 In the Caro Hotel, each of its 26 rooms have been tastefully decorated to a high standard by the famous Barcelona designer Francesco Rife. The soothing and neutral tones make for a relaxing and calming ambiance, perfect for a great night’s sleep. Once the home of Marques de Caro, Caro Hotel still retains some fragments of the both the Roman city and Arab city wall which have been tastefully incorporated into the modern design. Most enchanting in Caro Hotel is the Arab Tower room which features a section of the 12th century city wall, and features the bed on the mezzanine level – warning: this is a popular room choice! 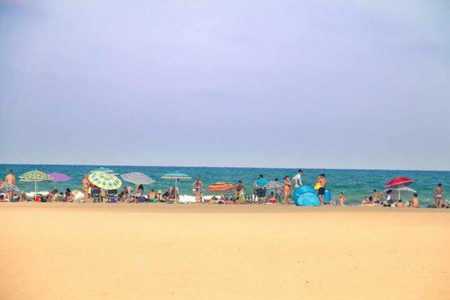 This one is perfect for those who want to be in the region of Valencia, but not directly in the city centre. Less than an hour’s drive to the city centre, this is an ideal alternative to the busy city life. This enchanting and historic hotel is located in the North-Eastern part of Xativa’s castle, one of the most visited places in the Valencia region. Still surrounded by the old defence wall, the Hosteria de Mont Sant immerses guests in history and charm. Boasting only seven rooms, this hotel offers an intimate and escapist ambiance, especially if guests choose the two rooms which were added at a later date outside the main building – “Castillo” and “Catedral” which boast an even more private atmosphere. Given its spectacular location and views, surrounded by nature, and the declaration of the hotel as a significant architectural and artistic monument, the relatively short drive to the city itself is justified.
Address: Subida al Castillo de Xàtiva, s/n, 46800 Xàtiva, Valencia, Spain +34 962 27 50 81

City of Arts and Sciences Complex | © Alex DROP/flickr
View Rooms
A modern and chic hotel which is in keeping with the city’s modern architectural and scientific movements, lHotel Ilunion 3 was fully renovated in 2014 and is right opposite said popular arts and sciences complex, making for a prime and central location. For an affordable option in one of the most ideal locations, Hotel Ilunion 3 is an almost unbeatable choice. Forget traditional and historical architecture, this hotel is all for the modern which also shows in the amenities – all rooms are equipped with air conditioning, flat screen tvs, and wireless internet. Guests can also grab a bite to eat at the charming on-site restaurant, or relax with a drink at the bar before or after enjoying the many sites of the city.
More info

This exclusive hotel is located right next to the much visited Turia Gardens of Valencia, and is housed in a very architecturally impressive modernist building. The Westin boasts 135 comfortable and inviting rooms and suites, including some of the largest in the city, and they are all tastefully decorated with an American Art Deco style. This charming hotel has much more than impressive architecture and chic design, it also boasts three restaurants, two with spacious and inviting terraces, and one with an elegant bar, h’club Valencia, which serves champagne and creative cocktails. Guests can also take advantage of the pampering at their spa, with their unique offer of Sprunch (spa plus brunch).
Address: Carrer d’Amadeu de Savoia, 16, 46010 València, Valencia, Spain, +34 963 62 59 00 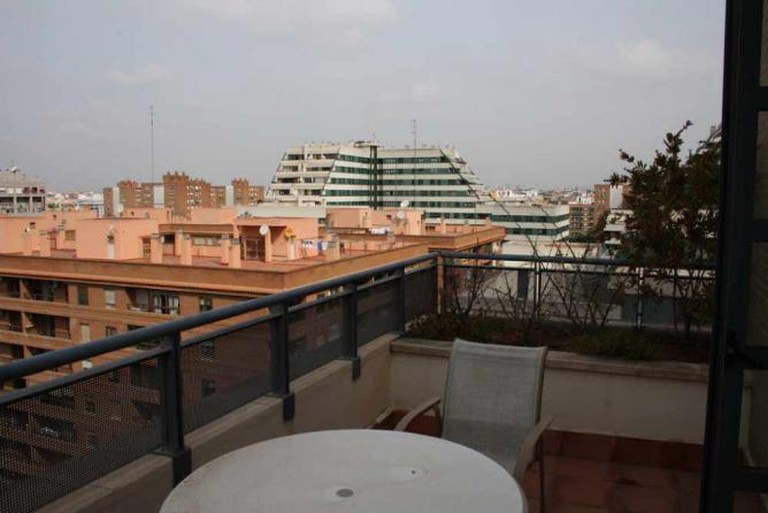 NH Valencia las artes | © Javier Peláez/flickr
View Rooms
For those who prefer modern and urban styles, NH Valencia Las Artes hotel is an excellent choice, and boasts an almost unbeatable location, just a few minutes from the popular Oceonographic and IMAX cinema. Guests can choose from 174 rooms, opting for standard rooms, superior rooms, or a Junior Suite. The simple and soothing subtle greys, green and brown tones continue the modern and contemporary theme, and create a relaxing atmosphere, with some rooms even overlooking the small but sweet garden. For a cultural taste, Valencian cuisine can be tasted in the satisfying hotel restaurant. For even more relaxation, head to the pool and enjoy a sauna experience.
More info

A stately Baroque inspired hotel, Melia Plaza is located in the charming Plaza del Ayuntamiento, ideally overlooking the bustling town square, and is just a five minute walk from the central market. With 101 spacious, bright and inviting rooms, all equipped with either heavenly king size beds, or two singles, Melia Plaza promises a comfortable night. Some of the more popular rooms boast private balconies with city plaza views. Not only are the rooms to a high standard, Melia Plaza also features an exercise room, an elegant restaurant with a terrace, a lobby bar, a sauna, and a rooftop sun deck, so it’s safe to say they’re not short on facilities.
Address: Plaça de l’Ajuntament, 4, 46002 València, Valencia, Spain, +34 902 14 44 40

Hotel
4.4/5 (283 Reviews)
View Rooms
This charming hotel is situated in the enchanting old part of the city and is part of a family of three in the city, each with their own unique character. Ad Hoc Monumental is right next to the majestic cathedral and serranos towers, and on the banks of the soothing river Turia. Guests are invited in to the 19th century building, authentically restored to preserve original features including wooden beams and mosaics, where they can enjoy a romantic ambiance and all the amenities that come with it. One such amenity is the praised Boix Quatre restaurant, boasting freshly produced, home cooked meals. All of the rooms are comfortable and tasteful, but there’s a choice between single, double, and double with terrace, to suit all preferences.
More info