The Best Boutique Hotels in Tenerife 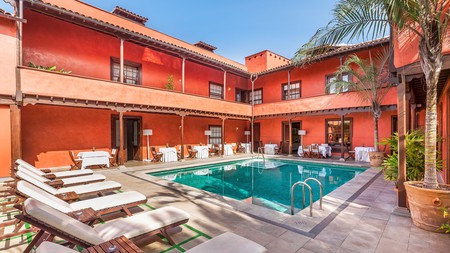 Tenerife is synonymous with large beach resorts in areas like Costa Adeje and Playa de las Americas but there are plenty of boutique hotels to be found on the largest of Spain‘s Canary Islands. Choose from a lodge in a volcanic crater 2,000m (6,562ft) above sea level in Teide National Park, the 16th century former residence of a Spanish marquis in the north coast fishing village of Garachico or a beachfront hotel in the town of Los Cristianos in the southwest. 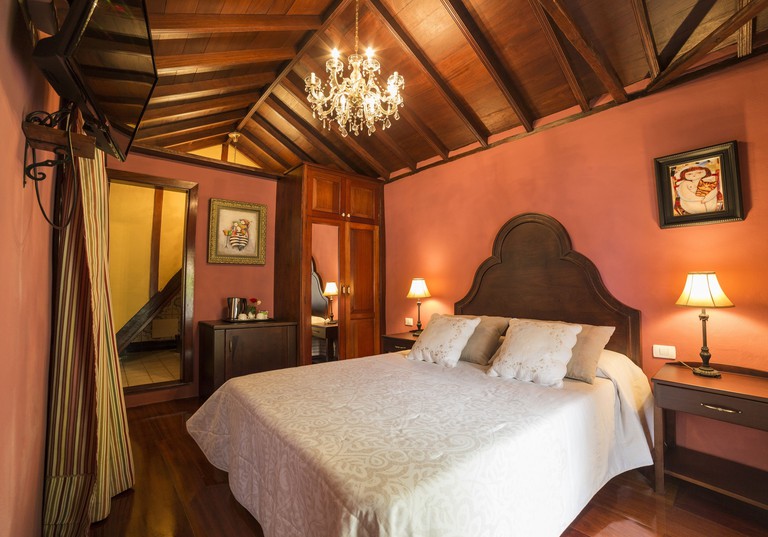 Courtesy of Hotel Emblemático San Marcos / Expedia
View Rooms
Housed in an 18th-century manor house, this hotel has an enchanting old world quality, with chandeliers, richly patterned rugs and gold-framed paintings. The hotel is split into four rooms and two suites, all of which have warm ochre walls, earthy tiled floors and exposed wooden beams. You are located in Icod de los Vinos’ historic centre just a four-minute walk from the Drago Milenario, which is the largest of Tenerife’s endemic dragon trees and is purported to be 1,000 years old.
EVERYTHING YOU NEED TO KNOW 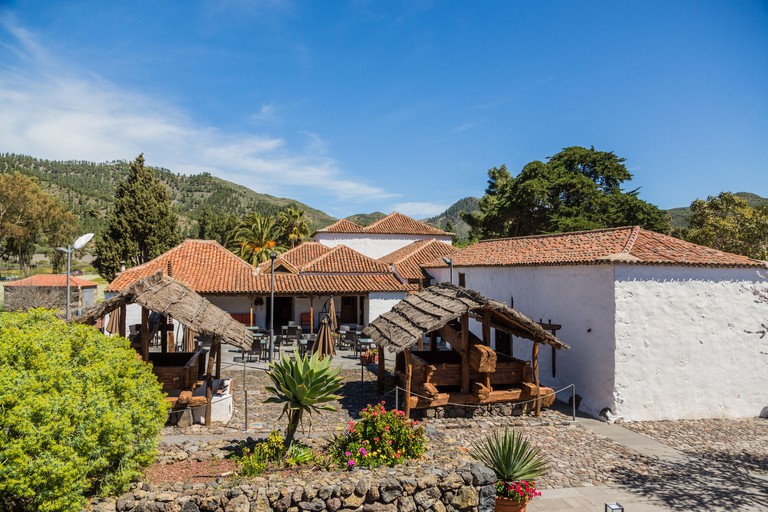 Courtesy of Hotel La Casona del Patio / Expedia
View Rooms
The Hotel La Casona del Patio has the feel of a ranch in the American Southwest. The grounds of the rough stone mountain lodge are home to horses and an old wooden Spanish wine press, while inside there is a small spa and a restaurant serving locally produced food. Even entry-level rooms have sofas and marble bathrooms, though the decor is more sterile than the atmospheric common areas. Its backcountry location, just 5km (3mi) from Masca mountain, lends itself to adventure pursuits, from horseback riding to hiking.
EVERYTHING YOU NEED TO KNOW 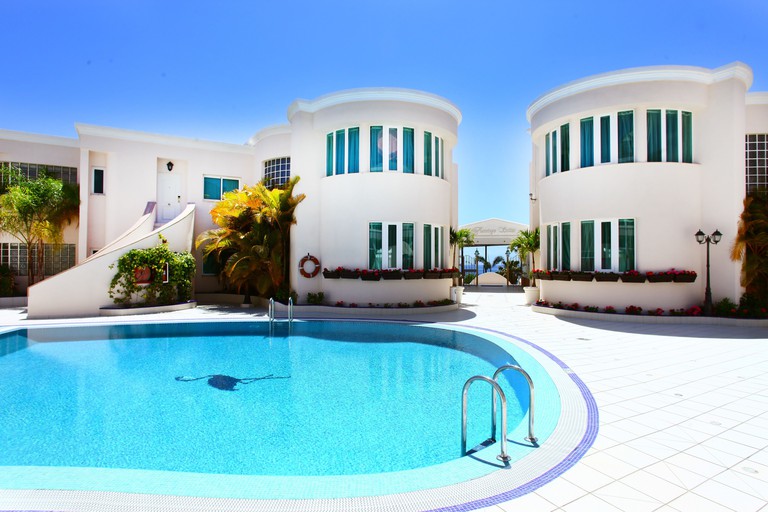 Courtesy of Flamingo Suites Boutique Hotel / Expedia
Flamingo Suites is a little oasis amid the nightlife of Costa Adeje, with its all-inclusive resorts, theme parks and strip malls. The property looks like it belongs in a posh part of Southern California – think Beverly Hills or Palm Springs. Curvy pink two-storey buildings with green shutters and glass-brick walls give an art deco vibe. The 18 suites and villas include options with multiple bedrooms, kitchens and private pools, making Flamingo a nice pick if you’re travelling with friends, plus it’s just a three-minute walk from popular Playa de la Pinta.
Open In Google Maps
Costa Adeje, Canarias, 38660, Spain
+34922718400
Visit Website
Give us feedback 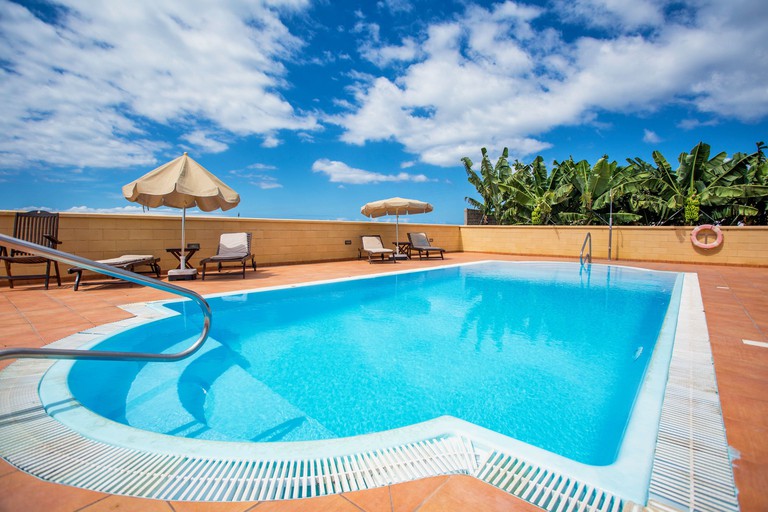 Courtesy of Hotel Rural El Navío / Expedia
Hotel Rural El Navío is the antithesis to the loud resorts so popular in Tenerife’s Playa de las Americas. This is a family-run hotel for adults only, set in the owner’s banana plantation. It’s a sweet, simple place whose guest rooms have private terraces with views over the Atlantic, plus there’s a communal rooftop terrace. The eight rooms have a quaint charm with tile flooring, wrought-iron bed frames and wooden windows with slatted shutters. Breakfast and dinner feature homegrown ingredients from the farm, including as many Canarian bananas as your heart desires.
Open In Google Maps
s/n Prolongación Avda. Los Pescadores, Alcalá, Canarias, 38686, Spain
+34653239003
Visit Website
Give us feedback 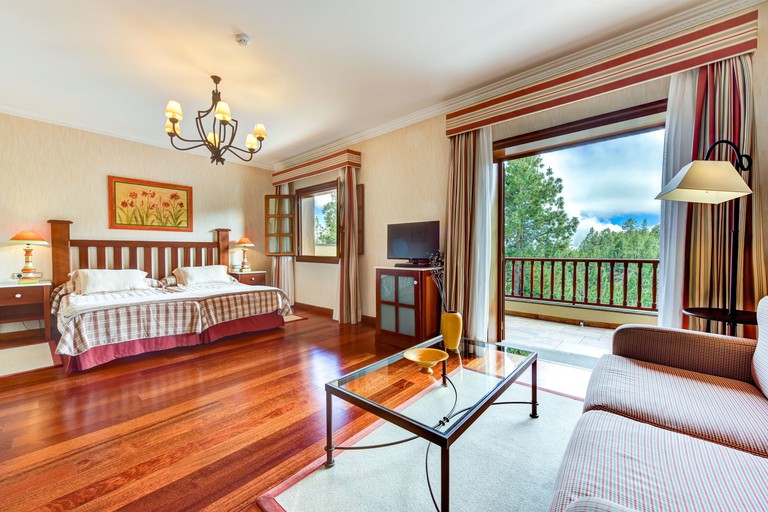 Courtesy of Hotel Spa Villalba / Expedia
View Rooms
Near Vilaflor is this family-owned boutique hotel surrounded by pine forest, at the edge of which begins the rocky, volcanic countryside of Teide – the largest of the Canaries’ four national parks and a Unesco World Heritage site. Several hiking paths start at the hotel and you’ll really appreciate the indoor/outdoor spa pool and thermal circuit after a trek. The 22 traditional rooms have glossy wood-beam floors, coffee/tea facilities and balconies for admiring the forest scenery.
EVERYTHING YOU NEED TO KNOW 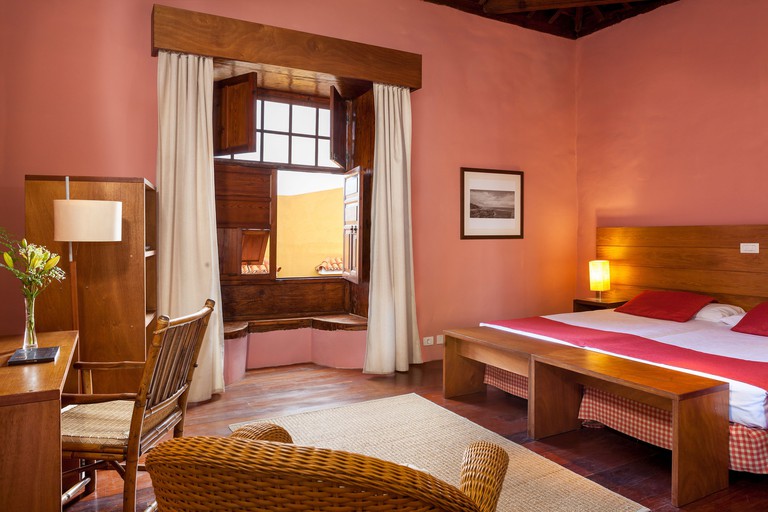 The former residence of a Spanish marquis, La Quinta Roja is one of the finest examples of baroque architecture on Tenerife and dates back to the 16th century. There are 20 rooms of varying types, from standard doubles on the first floor to the larger Double Plus and Junior Suites on the second floor overlooking the square. While the hotel doesn’t have a pool, you’re welcome to use the neighbouring oceanfront pool for free, plus there is a rental shop for road cycling. 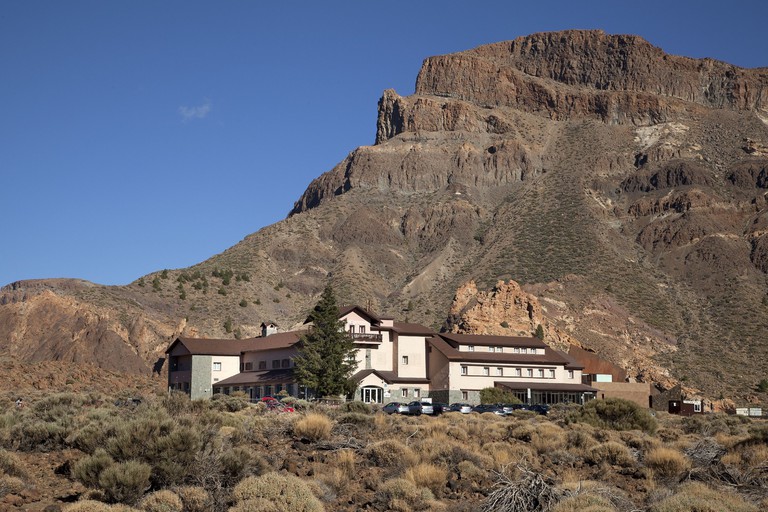 Parador de Las Cañadas del Teide is 2,000m (6,562ft) above sea level in a 16km (10mi) wide volcanic crater in Teide National Park. It’s a welcoming mountain lodge with wood furnishing and an exterior made from exposed stone. The rooms have white walls and floral prints, dark-wood furniture and beige furnishings. The hotel has a telescope, which is used in a guided stargazing session every Friday. There’s excellent food available, including creative dishes of rabbit and goat. 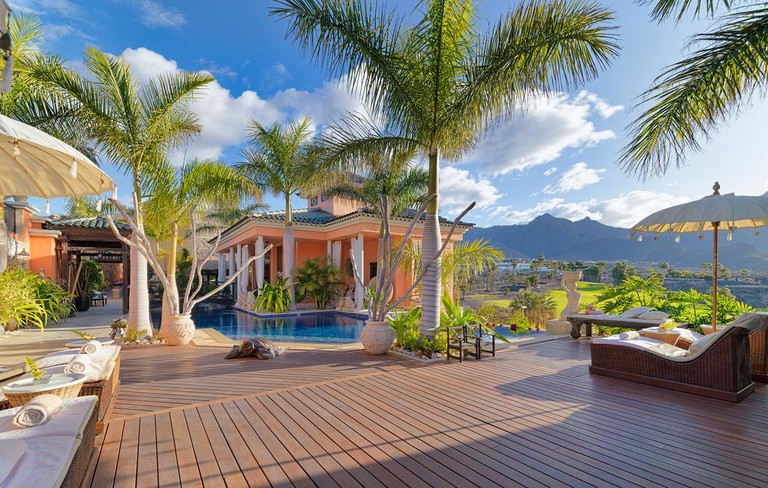 Royal Garden Villas in Adeje is a great jumping-off point for the Southwest waterparks and beaches. Twenty-eight private villas make up this opulent hotel, each with their own pool, hydro-massage showers and kitchens. You can enjoy a cocktail by the communal pool before tucking into Canarian-style octopus at the romantic Jardin Restaurant. Don’t forget to pay a visit to the Golden Pond Spa, with its waterfall, Turkish bath and ice fountain, plus massage and facial treatments. 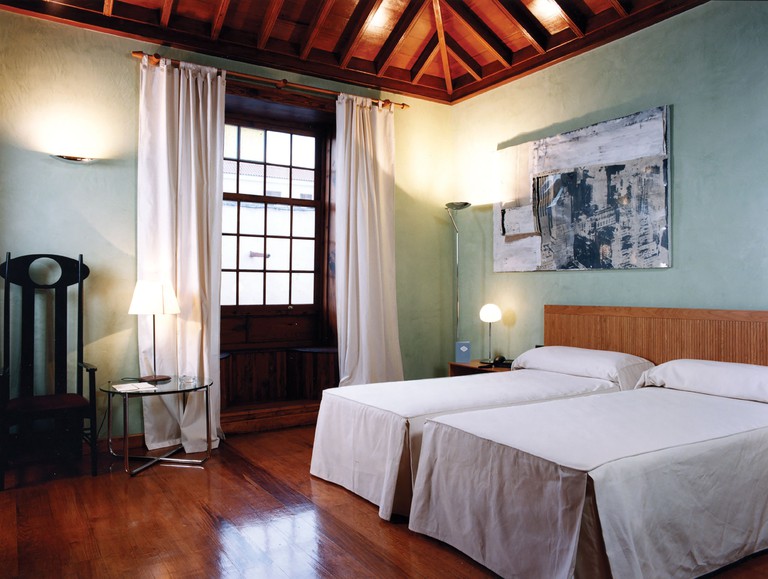 Courtesy of Hotel San Roque / Expedia
View Rooms
Hotel San Roque is a peaceful respite in the centre of Garachico, a traditional fishing village in Tenerife’s north. It occupies an 18th-century mansion on a cobbled street with two courtyards, one with a heated pool, a restaurant spotlighting local meats and fish and a roof deck with ocean and mountain views. Its 20 units are a mix of rooms, suites and duplexes, and all feature jacuzzi tubs and original modern art. The buffet/à la carte breakfast, included in the rates, is particularly good.
EVERYTHING YOU NEED TO KNOW 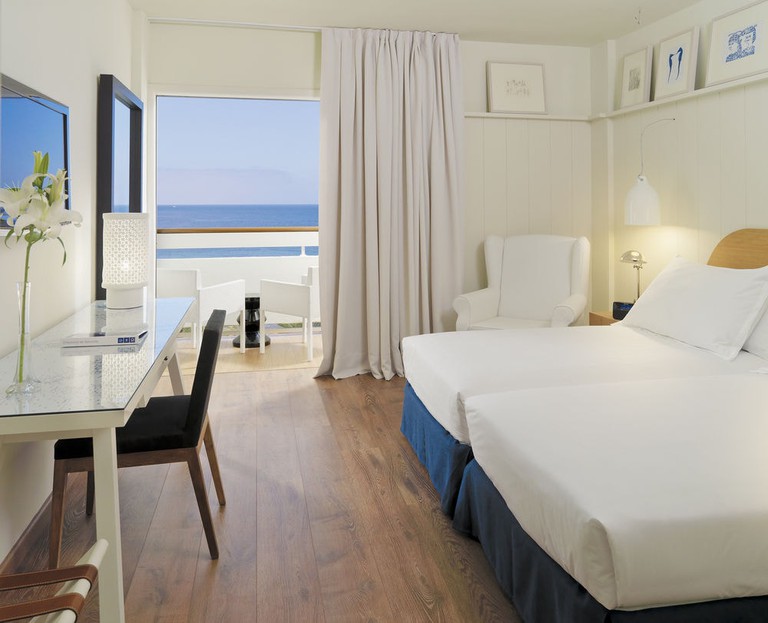 Courtesy of H10 Big Sur Boutique Hotel / Expedia
View Rooms
On the beachfront in the town of Los Cristianos on the southwest coast of the island, H10 Big Sur Boutique Hotel has a heated outdoor swimming pool, jacuzzi and sun terrace with ocean views. Each room and suite boasts a balcony and Nespresso coffee machine, while some overlook the Atlantic. Enjoy a peaceful Mediterranean dinner at the Blue Bay Night restaurant, surrounded by palm trees and without children running around, because this hotel is adults-only.
EVERYTHING YOU NEED TO KNOW