The Best Boutique Hotels in Girona 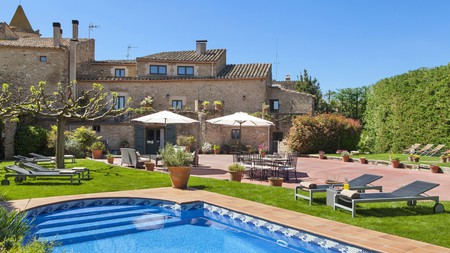 The capital of the province, Girona, is home to one of Spain’s last surviving Jewish quarters, where Jews lived in the characterful city from 982 to 1492. On arrival, you may well recognise some of the city’s landmarks as it was used as a filming location for season six of the Game of Thrones series. To get a true taste of life in this picturesque province and its capital, Culture Trip serves up 10 of the best boutique hotels in the area to book during your stay.

If there was ever a hotel for food lovers, Casa Cacao is it. The ground floor has been given over to a chocolate workshop and boutique run by the Michelin-starred Roca Brothers who have led the nearby Cellar de Can Roca restaurant to be crowned the best restaurant in the world on a number of occasions. The hotel décor takes its lead from the cocoa bean, with rooms dressed in earthy, natural tones and materials. Head to La Terrassa, the rooftop eatery, for gourmet brunches served up with endless views of Girona’s Old Town. 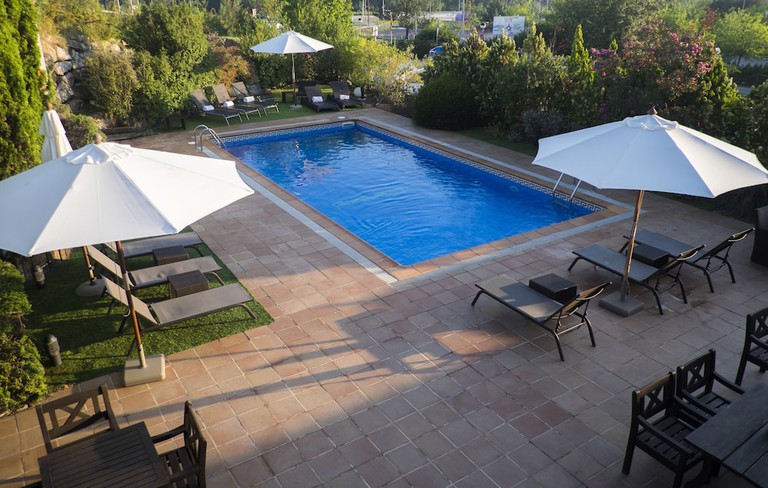 Nestled on the northern edges of the city of Girona, and 15 minutes’ walk from the old town, the Hotel Costabella is an ideal base to stay for exploring the city as well as the stunning local landscape. This family-run hotel offers a range of inviting, contemporary rooms, from single to quadruple, and a plethora of services. Choose from cooling off in the large outdoor swimming pool, relaxing in the sauna and jacuzzi, sweating it out in the gym, dining in the restaurant or even tending to your bike in the secure bicycle park after a day on Girona’s famous cycling routes.

This imposing hotel set in the village of Sant Julià de Ramis rises from the town’s former ramparts and commands views over the surrounding landscape. Luxurious guest rooms open out to balconies and terraces with vistas of the Pyrenees beyond, and the spa features an outdoor jacuzzi, sensory showers and a hamman to stimulate the senses. Ideally located to explore the Catalan countryside and coastline of the Costa Brava, the Hotel Sants Metges is housed in a unique cultural complex complete with the DOR museum and art centre and Atempo restaurant run by Michelin-starred chef Jordi Cruz. 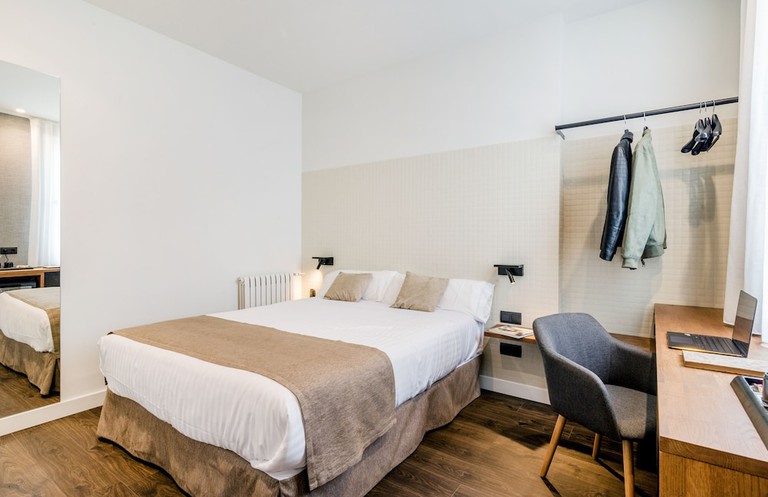 In the heart of Girona, the Peninsular Hotel has been a home from home for travellers for more than 150 years. Comfortable interiors offer a warm welcome, matched by the friendly local staff who are on hand to advise on what to see and do in this ancient city. The hotel’s restaurant, the Savoy, has been a meeting place of Girona’s good and great since the 1930s and still holds a special charm today. 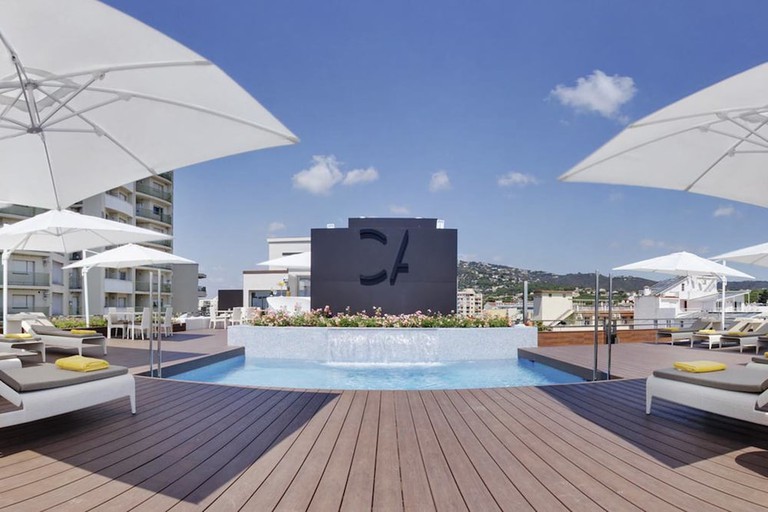 Endless sea views are the star of the show at this contemporary hotel in Platja d’Aro, around a 45-minute drive south-east of Girona city. Set right on the promenade, the Cosmopolita Hotel Boutique is tailor-made for beach lovers. Guest rooms take the form of sumptuous, spacious suites and some feature balconies with sublime sea views. There is a Japanese-inspired restaurant with a great sushi chef preparing dishes from the local catch, while the outdoor terrace is a top spot for watching sunsets over the Mediterranean Sea with a refreshing cocktail to hand. 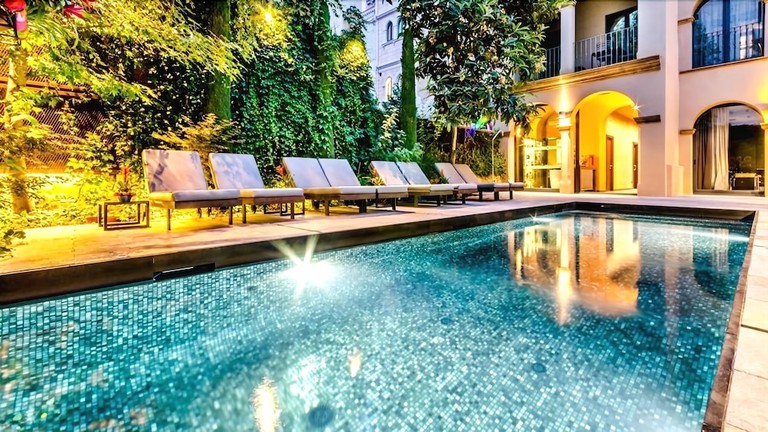 Housed in a typical old Catalan-style building, Hotel Nord 1901 has been completely renovated and offers all the latest in mod-cons and classic design. With its mix of rooms, suites and apartments, Nord 1901 provides guests with an ideal central base. With a decor of earthy tones and polished wood floors, the rooms are soothing and relaxing places to stay in. The best part about Nord 1901 however, is its leafy outdoor garden and swimming pool – it’s the only central city hotel that has one. 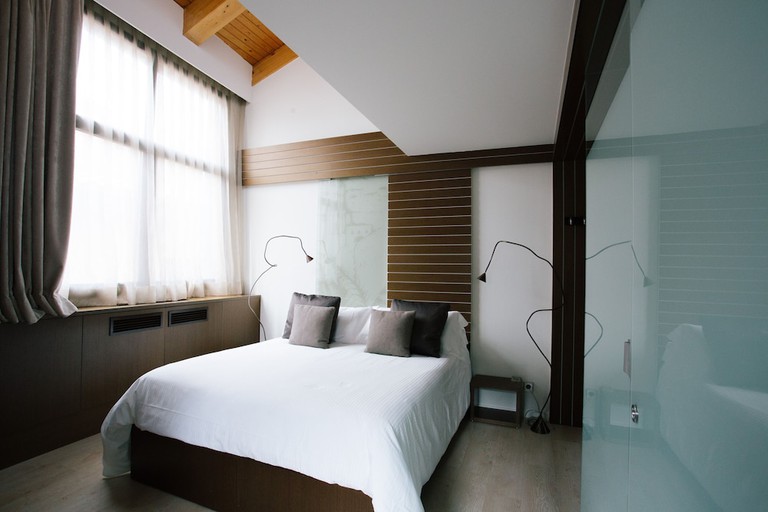 In the heart of the old town, Hotel Museu Llegnedes de Girona lies just a few steps away from Girona’s historic cathedral and the church of Sant Feliu – two of the most important sights in the city. A chic boutique hotel with a decidedly ancient-Greek feel to its decor, it specialises in catering to cyclists. Rooms fuse modern design with original elements, such as exposed brick walls and arches, while suites and duplex rooms have an avant-garde style, complete with contemporary pieces of furniture. There’s also a breakfast bar serving local and ecological products, as well as a massage service. 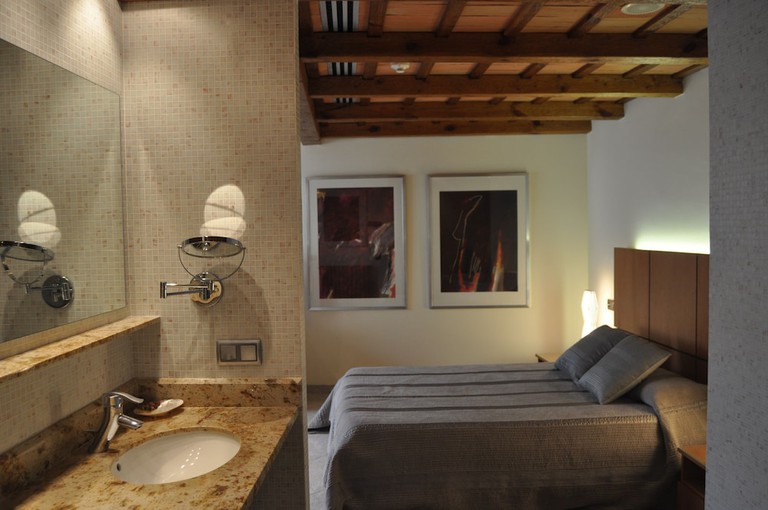 Situated in the old Jewish Quarter of the city, right next to the cathedral and Plaza de Santo Domingo, the charming Hotel Històric perfectly mixes old and new. Built on top of ancient Roman foundations, and with old 8th- and 9th-century stone walls, it offers modern comfort in a remarkable historic setting. Rooms have exposed stone walls, wooden rafters and beautifully made furniture – making them both cosy and luxurious. The hotel also offers four apartments with fully-fitted kitchens and dining rooms. 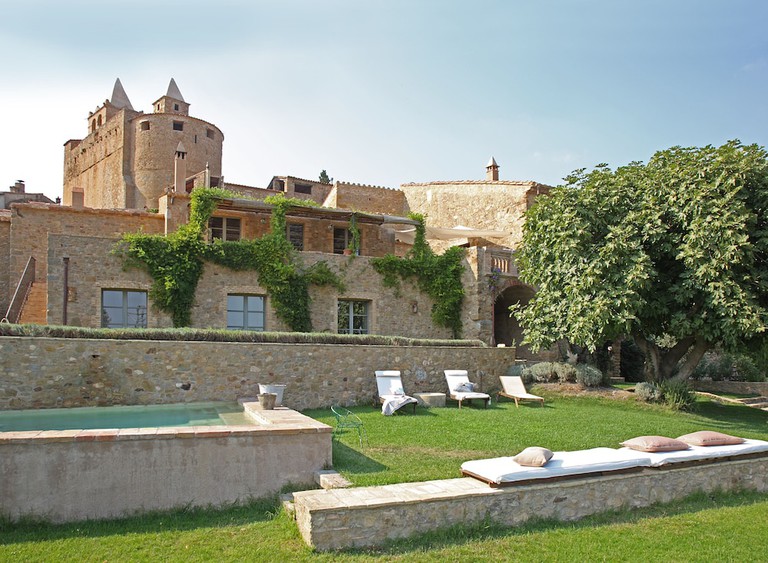 Half an hour’s drive away from the city in the medieval village of Madremanya, you’ll find Can Bassa, a 14th-century farmhouse, with spectacular views across rolling hills and forested landscape. A classic rural Catalan setting, it has solid stone walls and features three rooms in the main house, as well as five country cottages within the grounds. The old wooden beams, cosy fireplaces and lovely outdoor pool really make this place something special. 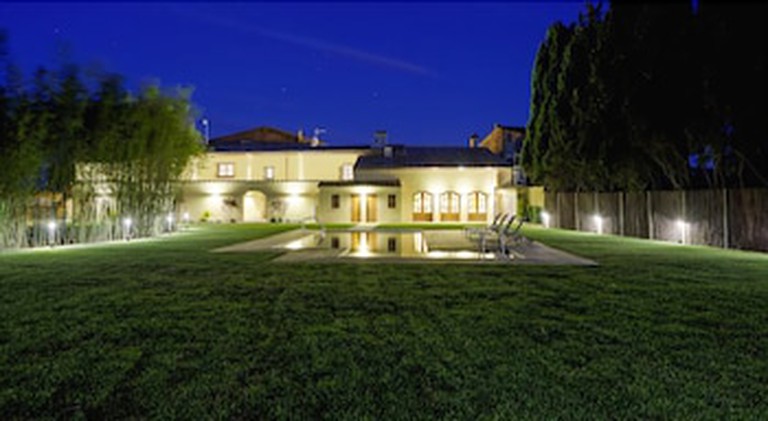 Housed in a traditional old Catalan farmhouse dating back to 1665, Boutique Hotel Can Pico epitomises Catalan country living – yet with an extra touch of style. It offers just 10 modern and luxurious rooms dressed in shades of cream and white. Spend your time here relaxing by the pool or in the olive grove, wine tasting in the hotel’s own bodega or exploring the surrounding countryside by bicycle. 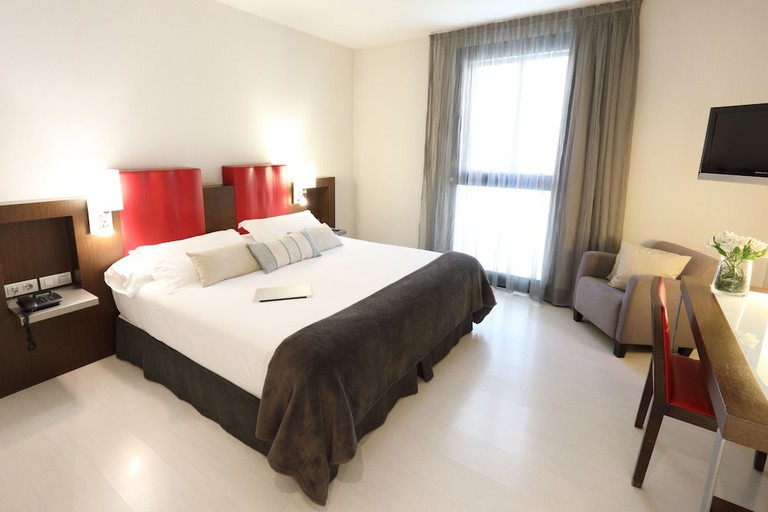 A contemporary hotel in the historic heart of Girona city, the Hotel Ciutat de Girona offers a range of classic rooms and cosy apartments decorated with pictures of the city. There’s also an indoor cycling space and a swimming pool for those who want to keep fit while they’re away. Nice touches include ‘the musician’s corner’ in the lobby and the free glass of sweet Moscatel wine upon arrival. 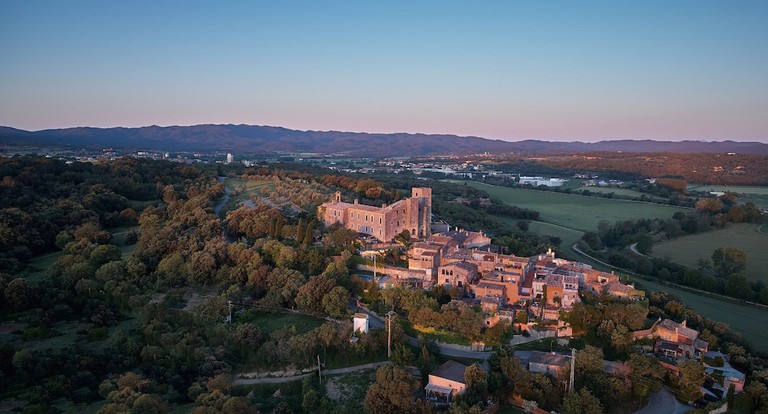 This hotel is something special. More than just a place to stay, this imposing former castle is a piece of Girona’s history. More than 700 years old, the Hotel Castell d’Empordà has been painstakingly restored to its former glory. Today, it’s filled with vintage furniture and pieces of artwork from the owner’s travels around the globe. The individually decorated rooms contain historic features, such as exposed brick walls and old tiles, but also all the luxury of the modern-day. Imagine sitting in your own castle tower, looking out across the spectacular views of the Catalan countryside. Facilities include two swimming pools, a spa, restaurant, yoga classes and nearby hiking and biking trails. 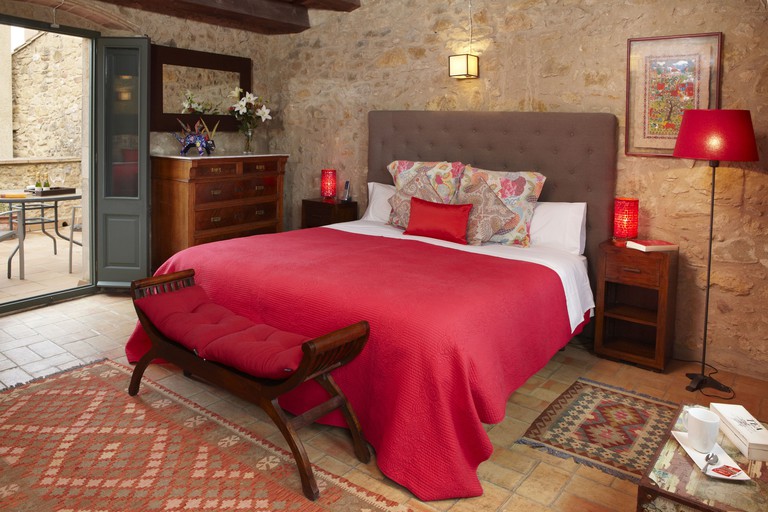 Set in the historic village of Madremanya the charming El Racó de Madremanya Hotel combines the enchanting features of a traditional Catalan farmhouse with all the luxury of a boutique hotel. Inside you’ll find old stone walls, cosy fireplaces and cave-like snugs, while outside there are flower gardens, fountains and two swimming pools. The stunning views and cosy decor make this place hard to forget. 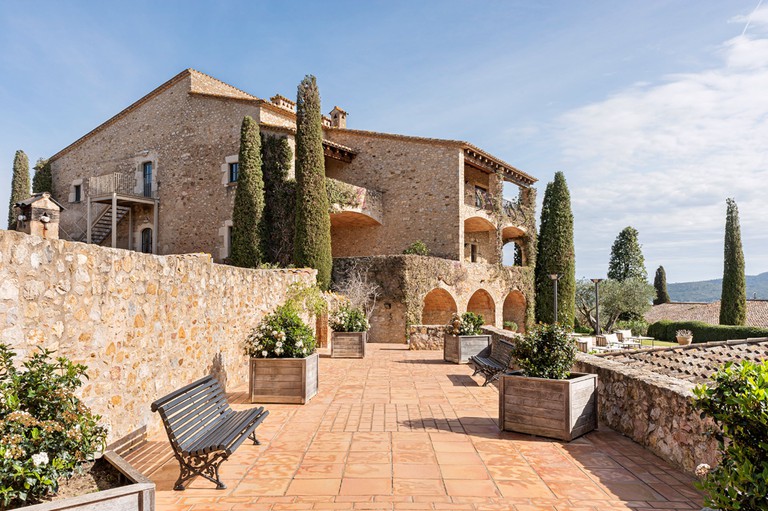 This luxury hotel and spa is a member of the prestigious Relais & Châteaux hotel portfolio, and situated around 24 miles (38km) south-east of Girona city, offering a relaxing escape in the Catalan countryside. Housed in an 18th-century farmhouse, there are 38 luxury suites with exquisite detailing, as well as exclusive extras such as private pools, terraces and jacuzzis. This is the ultimate getaway where you can skip between indulging in spa treatments, playing paddle and tennis, and dining on gourmet treats from Michelin-starred chef Fina Puigdevall.