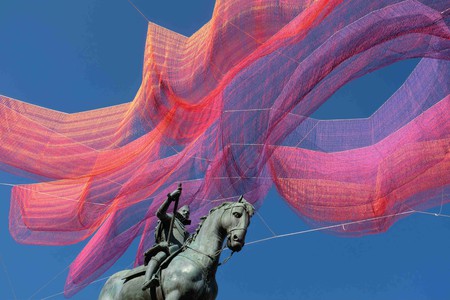 A new sculpture will celebrate the anniversary of one of Madrid’s most famous sights. In 2017, Madrid celebrated the 400th anniversary of its Plaza Mayor, the beautiful main square that over its four centuries has seen it all, from beheadings to bullfights, football matches to concerts. The year of events to celebrate the anniversary will culminate in February with a stunning installation by American artist Janet Echelman, known for her large-scale public art sculptures. 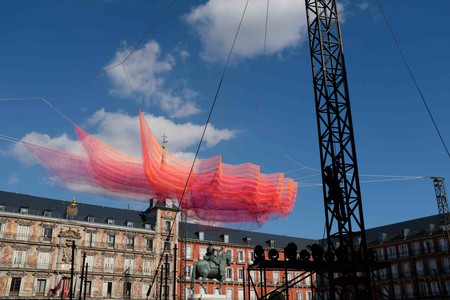 The installation being constructed | © Sara Houlison

The 30-metre (100-foot) aerial sculpture will be hoisted above the Plaza Mayor, a tangle of pinks and oranges made from layers of fibre, braided and knotted together. The lightweight material means that the sculpture will seem to come to life, moving with the wind. At night, it will be illuminated with projected coloured light.

The sculpture will have its grand opening on Friday, February 9 and will remain in place until February 19.

The sculpture, 1.78 Madrid, is the latest in Echelman’s Earth Time series, which her team has been working on for the past eight years. The work, according to Echelman, is designed to remind us of various cycles of time, from a single day to the four centuries of history of the Plaza Mayor.

“I like to think about the fact that 400 years ago people gathered here to watch violent spectacles, and that today we are gathering to contemplate ideas through art,” said Echelman in a statement. “This artwork calls our attention to our human trajectory.” 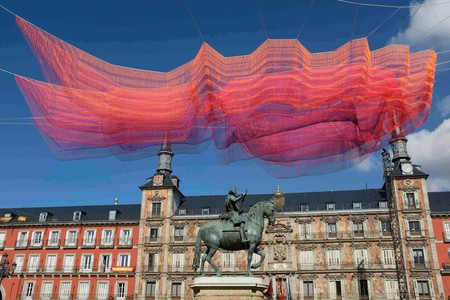 The installation being constructed on Madrid’s Plaza Mayor | © Sara Houlison

Madrid holds a special significance for Echelman, who has made installations across the United States, as well as in Portugal and Canada, as it was where she created her very first sculpture integrated with architecture. In 2001, she installed Target Swooping Down.. Bullseye! at Madrid’s IFEMA convention centre. It consisted of 1.6 million hand-tied knots that were installed around its courtyard and roof railing for the ARCO art fair.