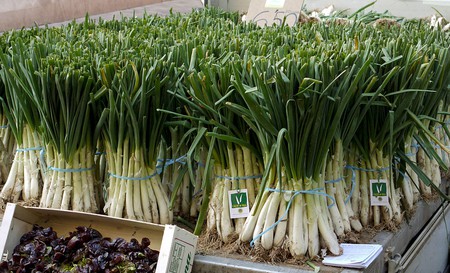 Around the end of January each year (dates for 2017 TBC), the autonomous region of Catalonia pays homage to the humble calçot (a bit like a cross between a spring onion and a leek) with a festival dedicated entirely to the vegetable. All over the region around this time, grilled calçots are served in restaurants, and locals even throw calçot parties, but it’s the small town of Valls in the Tarragona province that really goes crazy for them with a special Calçotada Festival.

The festival begins early in the morning when locals dressed in traditional costumes grill thousands of calçots outside in the middle of the town squares. The sweet, charred smell of burning calçots can be detected for miles around.

The next part of the festival is a competition to judge the best bunch of calçots grown by local farmers, as well as the best romesco sauce – traditionally eaten with the grilled vegetable. Made from almonds, garlic, olive oil, red pepper, tomatoes, and bread crumbs, it makes for the perfect accompaniment. During this time, there’s also the chance to look around at the many stalls selling classic Catalan delicacies such as cheeses, bread, ham, chorizo, and, of course, calçot products such as calçot bread and calçot coca (similar to focaccia).

After the judging is over, the festival moves up a gear with street parades, dancing, and music. A large calçot dances through the streets while being followed by giants, horses, and musicians playing classic Catalan tunes. Local school children also join the festivities, performing traditional dances with sticks. The parade culminates in the large town square where one of the main highlights of the festival takes places – the calçot eating competition.

During the competition, local men and women from the town and beyond aim to eat giant mounds of grilled calçots dipped in romesco sauce, and the first one to do so is crowned the winner. After watching people stuff their faces with this regional delicacy, it’s time for you to stuff your own at a big lunch served for the whole town. Tickets for lunch are sold throughout the day and buy you a bag filled with 12 grilled calçots, a tub of romesco sauce, a piece of bread, a small bottle of red wine, and an orange – plus a bib. No calçot lunch is complete without wearing a bib, as dipping them in red sauce and then lifting them up high, bulb-first into your mouth can get very messy. 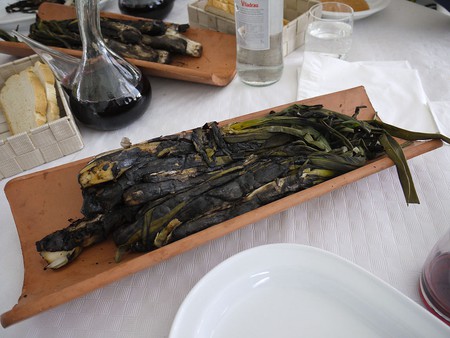 The atmosphere is a happy one, with both locals and small groups of tourists standing together and enjoying a meal – all thanks to the humble calçot.