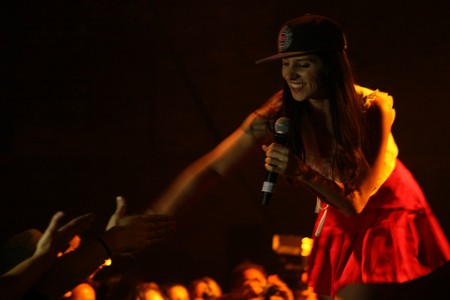 Since the early 1990s, Spain’s hip hop scene has been growing, mixing latin influences with flamenco and a Southern US trap vibe. From the scene’s original influencers, to the biggest urban artists of today, we take a look at the Spanish hip hop names you need to know.

‘The Violent Poet’s Club’ in English, released what is considered the first rap LP recorded in Spain. Madrid Zona Bruta (1994) talked about life in the suburbs of Madrid and spoke directly to a Spanish audience. Together with Barcelona-based 7 Notas 7 Colores, they moved away from the style of US rappers and MCs, forging a new Spanish hip hop sound.

La Mala (The Bad One), as she is known, continues to remain Spain’s undisputed queen of rap 17 years after her first album in 2000. Hailing from Jerez de la Frontera, southern Spain, she was one of the first women to really dominate the genre and is hugely popular across Spain and Latin America. Her music is influenced by flamenco and her lyrics deal with poverty, racism, domestic violence and female empowerment. Her songs have featured on the soundtracks of several films, including Y Tu Mamá Tambián and Fast & Furious.

Zaragoza’s Violadores Del Verso (Verse Violators), founded in 1997, comprises three MCs and is the inspiration for many of Spain’s young rappers. The group was fundamental in Spain’s burgeoning hip hop genre, in both bringing more attention to rap and inspiring young fans to get into the scene.

He has been dubbed “the Spanish Drake” and C Tangana really hit the big time in 2016 when the 26-year-old producer and vocalist from Madrid released the track “Antes de morirme” featuring flamenco singer Rosalia. Tangana is a founder member of the label and collective Agorazein. He perfectly straddles hip hop, pop and electronica and is one of the biggest names in Spanish urban music right now.

Hailing from Spain’s south coast, Granada native Yung Beef has been making hip hop, with a strong trap influence, since 2013. His sound combines Caribbean influences with modern urban hip hop. His renown was cemented in 2016 when he starred in Calvin Klein’s #mycalvins campaign. He helped form collective PXXR GVNG, named by Spain’s major newspaper, El País, as the country’s most important rap phenomenon in decades. He has a prolific output, releasing hundreds of singles and EPs, his most recent being 2017’s Kowloon mixtape.

Another member of the PXXR GVNG collective, Cain, real name Dani Gómez, has a deep drawl and has collaborated with Yung Beef as well as releasing his own material. Like Yung Beef, he prolifically releases new material: check out his 2017 releases El Niño de Sus Ojos and Fallen Angel.

The third member of the PXXR GVNG collective is, like Yung Beef, from Granada, southern Spain, but has family roots in Morocco. His style is more aggressive than Yung Beef and Kaydy Cain, with tracks featuring Khaled spitting out rhymes over menacing strings.

A more internationally focused artist, Kidd Keo, from Alicante, has a German step father and raps in a mixture of English and Spanish.

This duo have amassed millions of views on YouTube for their raps, talking about everything from nights out to the difficulties facing the youth in modern Spain, which has the second highest level of youth unemployment in Europe. They have built up a huge fan base among Spain’s young people, mainly teenagers who flock to their live shows.

A big hitter on the Spanish hip hop scene for nearly 20 years, Rayden is still going strong. Hailing from just outside Madrid, David Martínez Álvarez was a member of A3Bandas and Crew Cuervos, which released a total of eight albums between 2003 to 2012. He has released a book of poetry and his latest album, Antónimo, in 2017.