Plaza de Toros, Seville | ©LukaszLukomski
Whether you agree with bullfighting or not, one thing’s for sure, Spain’s bullrings are impressive architectural structures and are definitely worth a visit, even just to look at the outside. Although bullfighting has been outlawed in provinces such as Catalunya, most of the bullrings and their structures still remain.

Cathedral, Building, Museum, Historical Landmark
Las Ventas Bullring in Madrid | ©imagea.org/Flickr
Situated along the busy Calle de Alcalá in Madrid, Las Ventas bullring is also known as ‘the Cathedral of the Winds’, because of its windy location. Built in 1929, it was designed by architect Jose Espeliú in a Neo-Moorish style and is also covered in blue and white ceramic tiles, designed by Manuel Muñoz Monasterio. It’s considered to be one of the most important bullrings in the world and is revered by matadors (bullfighters). Bullfighting is still a popular occurrence here and the season runs from March to October. If you don’t want to see a bullfight, you can explore Las Ventas on an organized tour.
More Info
Open In Google Maps
237 Calle de Alcalá, Madrid, Comunidad de Madrid, 28028, Spain
+34913562200
View menu
Visit website
Visit Facebook page
Send an Email
Give us feedback

Museum, Sports Center
Plaza de Toros de Ronda | ©BKP
One of the oldest bullrings in Spain, along with the Real Maestranza in Seville, Ronda’s bullring was built in the 18th century and is made entirely from stone. The bullring here holds special significance in the history of bullfighting as it was where the birth of the Rondeño style of bullfighting began. It is also the largest bullring in Spain — in terms of the diameter of the sand circle, not the number of people it seats. Home to the Real Maestranza De Caballería De Ronda, Spain’s oldest order of horsemanship, it is also a museum where you can learn all about the history of the sport.
More Info
Open In Google Maps
15 Calle Virgen de la Paz, Ronda, Andalucía, 29400, Spain
+34952874132
View menu
Visit website
Visit Facebook page
Send an Email
Give us feedback

Shopping Mall
Las Arenas, Barcelona | ©Oh-Barcelona.com
Since bullfighting has been outlawed in Catalunya, they have found different uses for their bullrings. Las Arenas bullring in Barcelona sits just next to Plaza España and has now been turned into a large multi-story shopping mall. From the outside you can still admire the bullring-like circular structure, covered in Moorish-style windows, yet from the inside it’s a glossy, modern shopping complex. Head up to the roof area to marvel at the spectacular views over the city or to grab a bite at one of the many restaurants.
More Info
Open In Google Maps
373, 385 Gran Via de les Corts Catalanes, Barcelona, Cataluña, 8015, Spain
+34932890244
View menu
Visit website
Visit Facebook page
Send an Email
Give us feedback

Building, Museum, Sports Center
Seville´s historic bullring | pixabay
Considered by many to be the oldest bullring in Spain, construction began on the bullring in 1760, in order to replace the old wooden structure that used to stand in its place. The building work wasn’t completed here until 120 years later, making it also one of the more complex and beautiful bullrings in Spain. Not only is the Real Maestranza de Seville one of the most impressive looking bullrings in the country, but it’s also one of the most important as it was here, along with Ronda, where the modern sport of bullfighting began. Even if you don’t want to see a bullfight, it’s worth it to enter the bullring to see its museum — one of the best in the country.
More Info
Open In Google Maps
12 Paseo de Cristóbal Colón, Sevilla, Andalucía, 41001, Spain
+34954224577
View menu
Visit website
Visit Facebook page
Send an Email
Give us feedback

The Plaza de Toros de Malagueta was built in 1874 and was designed by Joaquín Rucoba. It was constructed in the neomudéjar style and unlike most round bullrings, it is actually a hexadecagon, with 16 sides. The plaza can seat 14,000 people and also comprises pens, stables, and areas for the matadors. Don’t miss the Museo Taurino Antonio Ordoñez, located inside. Like many bullrings today, the Malaga bullring is also used for concerts and shows.
Paseo Reding 8, Málaga, Spain +34 952 069 823 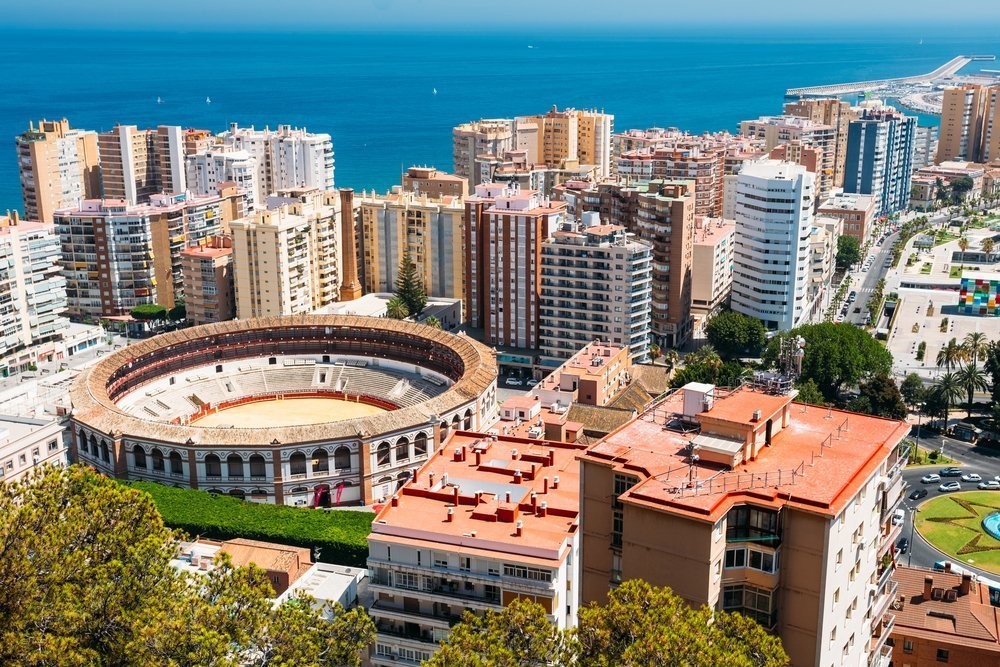