Seven Wines You Need to Try From the Canary Islands 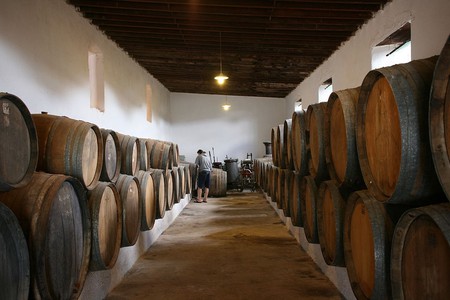 Believe it or not, wine has been produced in the Canary Islands for over 500 years. It was a popular tipple with European royalty in the 16th century, and even Shakespeare references a “cup of canary” in his play Twelfth Night. If you’re planning a trip, take a look at our pick of the islands’ must-try wines.

While the islands’ volcanic terrain and hot and humid climate may seem an unlikely location for wine-making, the Canaries are actually home to some of Europe’s oldest vines. While most were wiped out by a plague of aphids in the 19th century, the isolated location of the Canary Islands meant that they escaped its ravages. As a result, today’s vines remain indigenous and ungrafted (grown on their own roots).

Contemporary winemakers on the islands tend to shun international grape varieties and favour local grapes, and it is the combination of these grapes, volcanic soil, and high altitudes that make for some unusual and fantastic wines. Six of the seven islands produces wines, each island using different grapes and techniques to overcome the difficulties with terrain and climate. Having done some extensive sampling, we’ve come up with seven Canarian wines that you really need to try from the main three producers – Tenerife, Lanzarote, and Gran Canaria.

Tenerife produces the bulk of the Canary Island’s wines – particularly those that are exported – and is the only island with more than one much coveted D.O. (Denominación de Origen). Many of Tenerife’s vineyards are on the fertile slopes of the island’s volcano, Mount Teide, which also happens to be Spain’s tallest mountain. 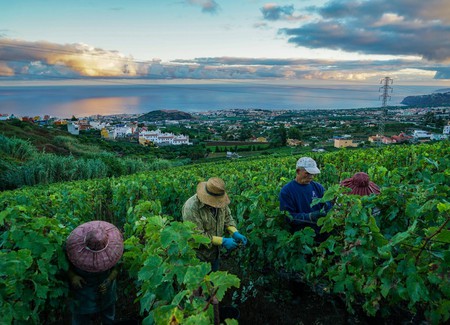 Suertes del Marqués uses indigenous grapes, grown in vineyards on the lower slopes of Mount Teide and organically farmed. Their most accessible red, from their reasonably priced 7 Fuentes range, is made from Listán Negro and Tintilla grapes, and has a peppery fruitiness with mineral tones. The Vidonia Blanco 2013 is round and flinty with superb body, and is 100% Listán Blanco. Bodegas Monje is a a family-run winery in the north of the island, producing amongst other wines an excellent tinto tradicional (traditional young red wine) with a characterful, fruity, minerality.

Lanzarote and its lunar-like landscape is relatively new to winemaking in comparison to the other islands. A series of volcanic eruptions in the 18th century covered most of the island in volcanic ash, and while this resulted in soil that made it hard to grow crops, the vines thrived. The vineyards add to the lunar feel of the island as the vines grow in shallow crater-like pits dug into the black soil, and protected by low walls.

Most of the wine produced on Lanzarote is dry and white, made from Malvasia grapes and with a high alcohol content. Bodega El Grifo produces some award-winning fruity dry white wines, produced from Malvasia Volcanica grapes, with a fresh and some say volcanic and mineral taste. Los Bermejos produce a fantastic sparkling white, made using the traditional champagne method and Malvasia grapes. 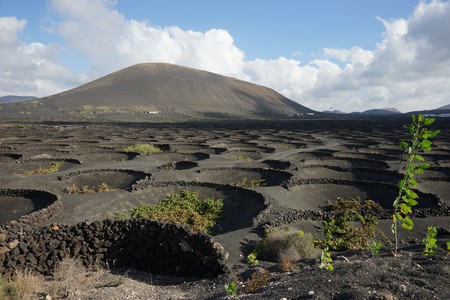 Gran Canaria wines tend to have intense mineral flavours and are mostly made from either Listán Blanco or Listán Negro grapes. The high altitude vineyards, such as Bodegas Bentaygas (one of the highest in Spain), produce some particularly excellent whites, and the Algala Altitude 1318 is well worth sampling.

Dry, with an intense floral fruitiness that lingers on the palate, this wine is made from grapes grown on vines in the Nublo Rural Park, a UNESCO Biosphere Reserve. The fresh and delicate tinto tradicional Frontón de Oro from is a great example of a cheap but tasty Gran Canarian red wine, produced using Listán Negro and Tintilla grapes. 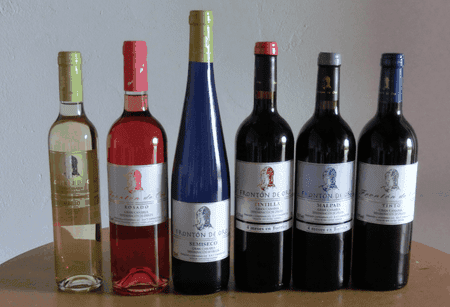 Image courtesy of Frontón de Oro
Give us feedback