Where to See Joan Miró's Art in Barcelona 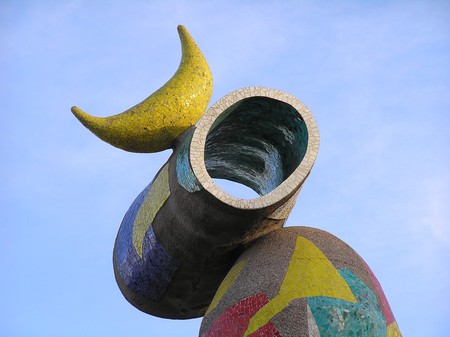 Born in Barcelona in 1893, Joan Miró is one of the most famous artists to hail from the city and is regarded as one of the most celebrated Spanish artists of the 20th century. Although Miró left the Catalan capital at various moments in his life, the city retained a special importance for him, and it is here that he decided to open the Joan Miró Foundation in 1975. Here are the best places to see Joan Miró’s art when visiting his native Barcelona.

Barcelona at the centre of Miró’s life

Joan Miró was born and raised in Barcelona’s Gothic Quarter, where he enrolled to study art at the age of 14. Yet, by the time of his early twenties, Miró found himself increasingly attracted to the surrealist circles that were gathered in Paris at that time.

After the early success of some of his work, he was invited to host a solo exhibition at the Dalmau gallery in Barcelona. However, this would prove to be a challenging moment for the young artist, as his work was ridiculed and even defaced. Determined to persevere, Miró left Barcelona and went to join the Cubists in Paris in what would be the first time the artist would leave his native city. 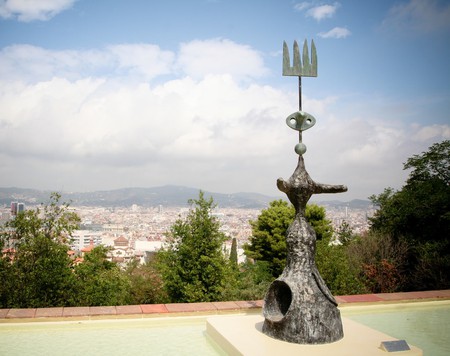 However, Miró could never quite abandon Barcelona altogether and would return to spend summers in Spain, seeking inspiration in the Catalan countryside. After the troubles of the Spanish Civil War and the Second World War, Miró once again settled in Barcelona, but this lasted just a few years. In 1956, the artist moved to island of Mallorca and would remain there until his death in 1983.

Despite his on and off relationship with Barcelona, the city of Barcelona and the Catalan province always retained a great importance in Miró’s world. Some of his artwork is directly inspired by pastoral scenes from his homeland, but a sense of Catalan nationalism also appeared in some of his work such as the The Reaper. The mural was commissioned by the Republican Spanish government in 1937 and depicted a Catalan peasant – a traditional symbol of Catalan nationalism.

In the late 1960s, nearly a a decade after he left Barcelona, Joan Miró announced that he would donate four works of art to the city. His idea was for these public artworks to welcome those arriving to Barcelona by air, by land or by sea. 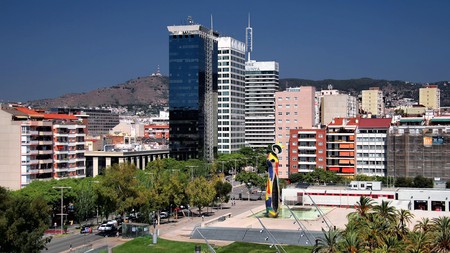 These days, many visitors get their first taste of Miró’s art as they arrive at the airport: the Mural de l’Aeroport is an impressive ceramic mural which covers the facade of the airport’s Terminal 2. Miró collaborated with ceramicist Josep Llorens Artigas to create the colourful mural, which measures nine meters in length and five in height.

For those arriving by sea, Miró designed the mosaic found on the Pla de l’Os, a segment of La Rambla located just outside the Boquería market. Miró envisioned those arriving at Barcelona’s port to stroll up La Rambla as they entered the city and literally walk on top of his mosaic – it’s not uncommon for visitors to have no idea they are standing on an original piece of art as they gaze into the bustling market. 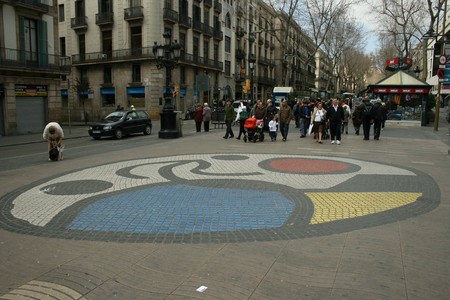 Further out of town, the then Parc de l’Escorxador – since renamed the Parc Joan Miró – is the emplacement Miró chose for his Dona i Ocell (Woman and Bird) statue designed to greet those arriving into the city by car. Measuring some 22 meters in height, the statue’s theme is recurring in Miró’s work, with women and birds appearing in many of his paintings, drawings and sculptures.

Finally, the fourth of Miró’s donations to the city is none other than the Joan Miró Foundation, Centre of Studies of Contemporary Art. The space, designed by the artists alongside his friend Joan Prats, was intended not only to house a large collection of Miró’s work but also to promote the work of young artists. 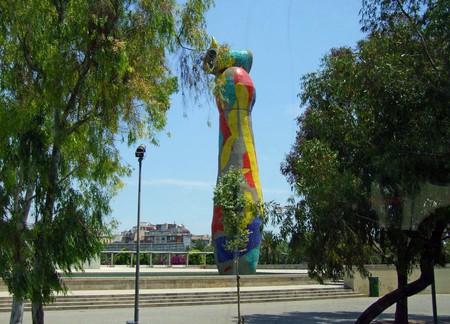 Located on Montjuïc hill, the Joan Miró Foundation is one of Barcelona’s most popular art museums and attracts hundreds of thousands of visitors each year. The building was purpose-built in consultation with the artist himself and houses over 10,000 pieces of art, including some of Miró’s most remarkable works.

These include a model of Miró’s Chicago, the original of which stands outside the Chicago Temple Building in Chicago, as well as The Caress of a Bird, a sculpture made by Miró in his Palma de Mallorca studio in 1967. 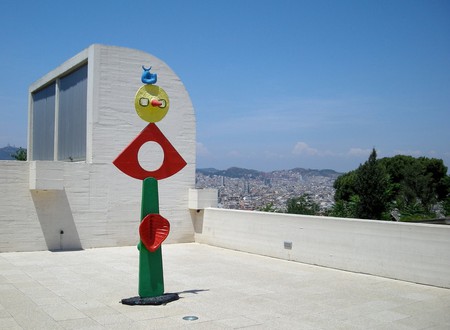 The Caress of a Bird by Joan Miró | © malouette / Flickr

However, the foundation is also dedicated to promoting the work of young artists and has regular temporary exhibitions featuring contemporary artists from around the world. The dedicated Espai 10 and Espai 13 (espai meaning ‘space’ in Catalan) are some of the most cutting-edge art spaces in Barcelona, hosting experimental and interdisciplinary exhibitions.

So, whether on the streets or in a museum, Miró’s art is everywhere to be seen in Barcelona. Having drawn much of inspiration from his homeland, Miró has in return left a lasting mark on the city and undoubtedly added a spark of colour to Barcelona.