Sagunt A Escena: Classical Theater In A Roman Amphitheater

Sagunt a escena is the most important festival of classical theater in the region of Valencia, and one of the most significant in all Spain. Come to visit the city of Sagunt during the summer, and discover this very interesting theatre festival, together with its impressive main stage, an amphitheater from the Roman period.

Sagunto is a town situated 30 kilometers north of Valencia. Today it is the 5th biggest city in the region, but many centuries ago, during the Roman period, it was one of the most important cities in the whole Hispania. This significant influence can still be seen nowadays in the town. The city of Sagunt is well known for its multiple archeological remains and diverse monuments from the Roman Era. Among all of them the most important ancient jewels that can be found in the city are the remains of the Roman Circus, the Castle, from the same period, and most of all, the amphitheater, one of the most well preserved roman theaters amongst the 11 that have been found in Spain. 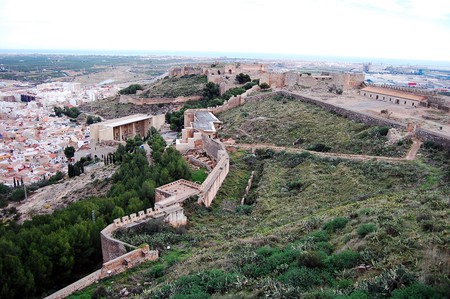 This building, from the 50 A.C. is the most important monument in the city it has been declared Bien de Interés Cultural (Heritage of Cultural Interest) by the Spanish government. After many centuries of abandonment, between 1992 and 1994 the theater underwent a big renovation performed by the architects Giorgio Grassi and Manuel Portaceli. It was a very discussed work, as different elements were added to the remains, which changed several aspects of the building. But, on the other hand, this renovation also made the sight more useful, as thanks to this work the building can be used again as a stage. Nowadays, it is open to the public and it also holds different concerts and representations; among them, as it has been said, it is the main stage for the classical theater festival Sagunt a Escena. 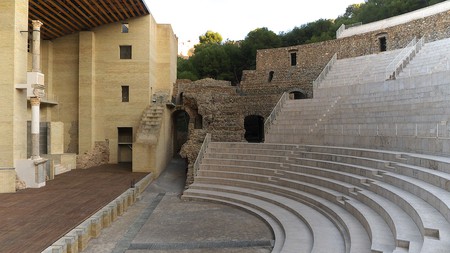 Sagunt a Escena is a theater festival organized by the Instituto Valenciano de Cultura (IVAC), the municipality of Sagunto and the Diputación de Valencia. It is a classical theater festival performed during July and August, and in 2016 it will already reach its XXXIII (33rd) edition. In the theater industry it is the most important event hold in the region of Valencia, and even in Spain it is very significant (although it is still quite far from “its cousin” in Merida: El festival de teatro de Merida). 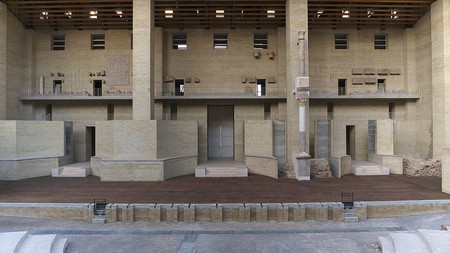 The festival is divided in two main sections; first, the program at the Roman amphitheater, the main stage of the festival where the most relevant plays are performed. Usually this stage holds different pieces of dance, theater or music, which are inspired or based in the ancient Greek and Roman culture. Adaptations of the classical Greek tragedies and comedies are always present at this festival. This part of the festival is very relevant; first of all because the location in which is performed (as it helps the public to imagine in some way how the theatrical experience was practiced in the Ancient Greece and Rome), but also, because the plays always include a brilliant cast, with different top names from the Spanish scene. 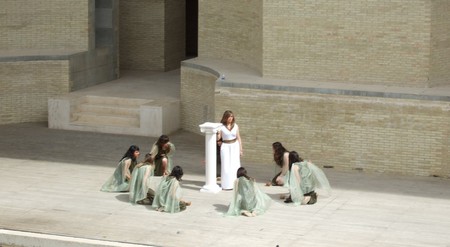 Performance at the Roman Amphitheatre of Sagunto | ©Virgi.pla/Flickr

In parallel, there is the other block of programming called the “Off Romà”. This is a complementary program conceived to give the festival a more global and festive ambience. This second part of the festival is held in different areas of the city, in open-air stages and for free. The representations that are performed here are not as notorious as the ones done in the amphitheater, but they are more frequent and open to a wider public — there are even events for children.

So, if you’re in Valencia you don’t miss to visit the city of Sagunt, this is a very beautiful city which such a accessible past, present in the city itself and in the different museums in it. But if you manage to be there during summer, even a better experience will be waiting for you. Sagunt a Escena brings more life to the city, as well as a great opportunity to discover and enjoy the Spanish theater scene and the Greek and Roman classics.