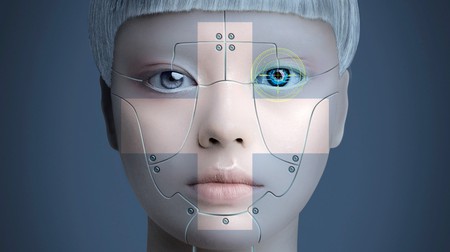 Barcelona may be known for its famous football club, its beaches, and most recently, for the large part it has had to play in Spain’s political standstill. However, the city is increasingly getting attention for a growing tech sector that is attracting businesses from all around the world. Those looking to the future have plenty to marvel at in Barcelona’s fairs, start-ups and museums. With the Mobile World Congress just around the corner, we took a dive into Barcelona’s technological world by looking at how the city’s cultural side is reflecting these changes. We went to see the +Humanos exhibition showing at the CCCB and followed this with a visit to one of Barcelona’s pioneering companies, PAL Robotics, to discuss some of the themes that the exhibition has brought to light.

A two-minute walk from Las Ramblas, the CCCB is currently showing +Humanos, an exhibition in which two of Barcelona’s booming sectors truly converge: technology and the arts. The very first instalment, Jacob Peter Gowy’s The Flight of the Icarus, a depiction of Icarus’s dramatic fall, gives the public an ominous representation of insatiable human ambition and its potential for folly. The painting’s placing at the start of the exhibition clearly sets out the tone that runs throughout the exhibition. It is set out as a cautionary tale from the outset, placing firmly in the public’s mind the parable, grounding all of the following instalments as potential catastrophes. A walk down the corridor that follows this 17th-century piece leads swiftly from an instalment on historical prosthetics through to an avatar machine and instalments on brain polyphony and cyborgism. 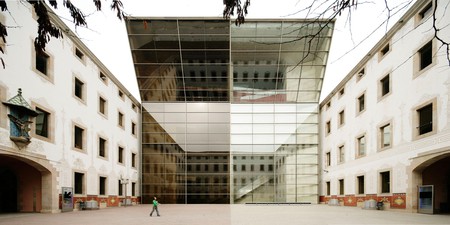 The Pati de les Dones at the CCCB / cccb.org | ©CCCB

The comparison is striking, and it lends a sense of danger to the proceedings, making the exhibition one that is not for the faint of heart. In fact, the organisers were remarkable in their decision to give a depiction of technology that doesn’t veer away from the bleak side of humanities pursuits. The exhibition is rife with disturbing imagery; from models of genetically modified babies to videos of a cow carcass being processed for meat, the +Humanos organisers haven’t veered away from the unsettling. This, however, along with the Icarus framing device, makes for a glimpse into our future that is realistic, daunting, and inspires awe and fear in equal measure. Moreover, most of the instalments are made up of pieces of technology that are either in their developmental phase or already have existing prototypes. There is a frightening sense of reality to the whole vision that has been set up at the CCCB.
There’s a way in which these contrasts reflect Barcelona’s own disparate elements. The city with its mix of classical and modernist architecture, its deeply rooted Catalan traditions and its booming tech sector is its own large scale representation of the way in which humanity is pushing into uncharted territory while struggling to maintain traditional values and boundaries. After having viewed the CCCB’s portrayal of the way in which technology is manifesting itself in our society, we were left with various questions. Are we really so close to being a part of this world that was so disturbing in its reality? How do people who work in developing pioneering technologies view these depictions of our future that they are supposedly helping to create? 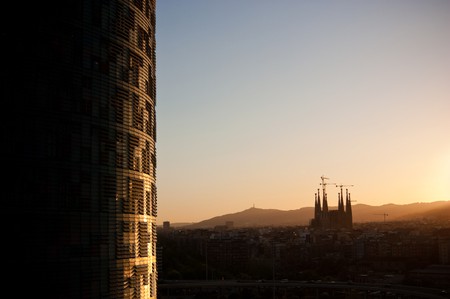 The old and the new: The Agbar Tower looks over Barcelona’s technological district, with the Sagrada Familia off in the distance | ©iStock.

We decided to take a look at a real representation of the ways in which these technologies are developing within Barcelona’s tech sector and sat down with Judith Viladomat, a member of the team at PAL Robotics in Poblenou, to discuss some of the themes that are explored in the exhibition as well as how she views the company as part of Barcelona’s push in technological progress. Not far from us was the company’s first robot model, REEM-A, winner of a chess competition and an integral part of drawing investors to the organisation at its inception in 2008. However, what most interested us was a work of art on display in the office, a sculpture of a Roman bust painted blue and with an opening in its head that reveals, rather than a human brain, a circuit board. The sculpture, entitled The Posthuman, donated by the artist Rogelio Fernández, is set up next to REEM-A and within view of the working stations as if to remind the people working there about the broader implications of what they are developing every day. 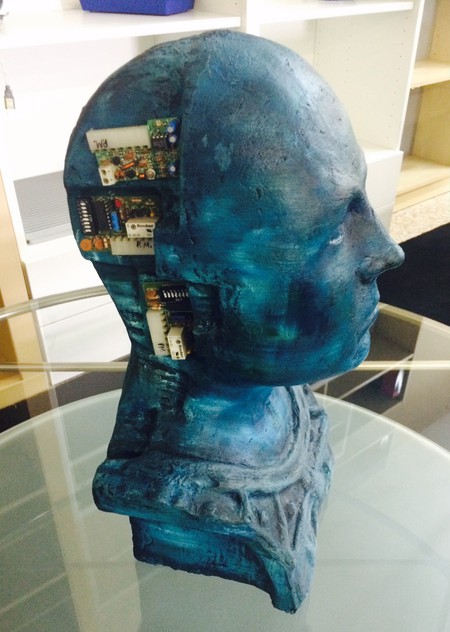 Having just been to the +Humanos exhibition, it was hard not to draw a parallel with the painting of Icarus. The bust’s Roman element is supposed to symbolise the peak of humanist expression; however, it is hard not to be drawn in by an element of the cautionary tale. The Roman Empire, after all, is one that imploded from within by overreaching its means. The first question for Judith was what are the dangers for her of this uncharted territory that we are heading into? ‘What you need to remember is that we are at the beginning of a long process. The developments are very hard to predict, but at the moment, if a robot is successfully programmed to open a door, that is seen as an achievement.’
So it seems that fictional doomsday comparisons are premature?
‘Yes, although currently we are at the stage where everything we do is new, so it is important to draw up ethical guidelines.’ 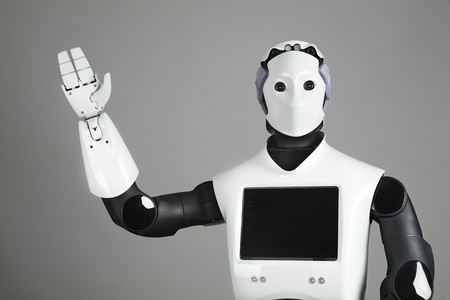 The way that PAL Robotics represents itself, in fact, is completely at odds with the somewhat bleak representation of robotics in the +Humanos exhibition. One instalment at the CCCB, called Area V5., is dedicated solely to the principle of uncanny valley, the idea that the more lifelike an imitation of a human being the more psychological discomfort it causes to the person viewing the imitation. This principle was taken into account when designing PAL’s user-friendly service robots. As Judith puts it, ‘REEM and REEM-C have been designed in order to appear friendly to people so that they can interact with them naturally.’ The robots have ‘a human shape, whilst also clearly showing that they are robots.’ 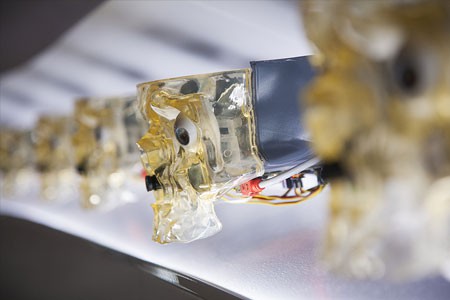 But is the potential for AI that can bypass human orders and become a threat to our safety possible?

‘Again, though our safety features are advanced by today’s standards, technology has not yet reached the stage where we have to worry about a robot that can purposefully harm a human being. The safety concerns in present day robotics are much more simple, though they take a great deal of time and effort to develop. One safety feature that has already been implemented into our TIAGo model, for example, is a response system which means that if the robot comes into contact with a solid obstacle, such as a human being, it has sensors that stop the movement and prevent the robot from harming that person.’ 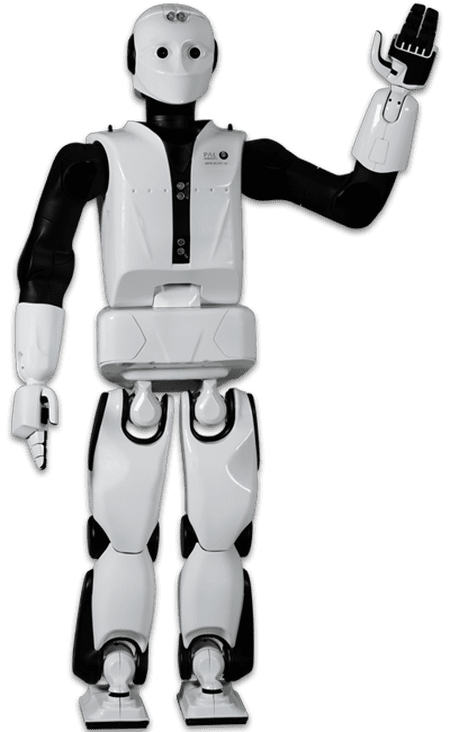 It seems that the main safety concern for robotics companies in general is not, in fact, that their robots may become sentient and harm human beings; rather it is that being insentient they may accidentally harm us due to an inability to sense when they are causing injury. Talk of killer robots at this point seems completely overblown. Judith tells us that REEM-C is 1.65 meters tall and weighs 80 kilograms. The risk of accident means that there are no immediate plans to make REEM-C available to the public; instead, the model is being used in laboratories and research departments by people who can use it in a controlled setting. The understanding after listening to Judith is that we are entering into a new phase that will be good for humanity. When asking her what she thinks the main goal is for most people working in robotics she replied succinctly that it is simply ‘to ease people’s routines so that their quality of life is increased. If we learn to coexist properly with technology, we will surely benefit from it.’ 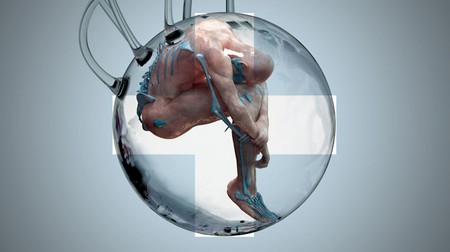 It is this coexistence that is the crux of the issue, and here the disparity exists. Speaking about the themes that are brought up by his sculpture, Rogelio Fernández says himself that ‘it is not a bad change; it is a broad horizon opened to humanity, and can bring many benefits.’ It is intriguing, however, that the sculptor bases his statement on the apparently set assumption that these changes are, in fact, a bad thing. While PAL Robotics are working on making user-friendly service robots, other companies are striving to make humanoids that can act and, above all, feel like human beings. We are moving into a future in which machines will be created to serve us, and yet the line between human and machine will progressively blur. In the +Humanos exhibition, a three-part video instalment entitled Whose Utopia? captures the dreams and aspirations of factory workers and contrasts these with their everyday lives working on the factory floor. The description at the instalment describes the piece as being reflective of ‘a system that desires machines with human intelligence and humans that can perform like machines.’ A future with robots is one that undoubtedly has the potential to make our lives easier; however, it also brings to light a shroud of uncertainty full of moral and ethical grey areas. What makes us human? What are the repercussions of striving to simulate human life in machines that are made to be subservient? For a wide-ranging exploration on the subject, go visit the +Humanos exhibition at Barcelona’s CCCB museum.