Javier Marías is an insightful and witty novelist with a recurrent concern: the harm words can do. Regularly mentioned as a potential winner of the Nobel Prize, this Spanish writer narrates contemporary life and language – and does it with energy, ambition and intellectual zeal. His award-winning novel A Heart So White was included in the prestigious catalogue of Penguin Modern Classics, a recognition granted only to a handful of living writers. 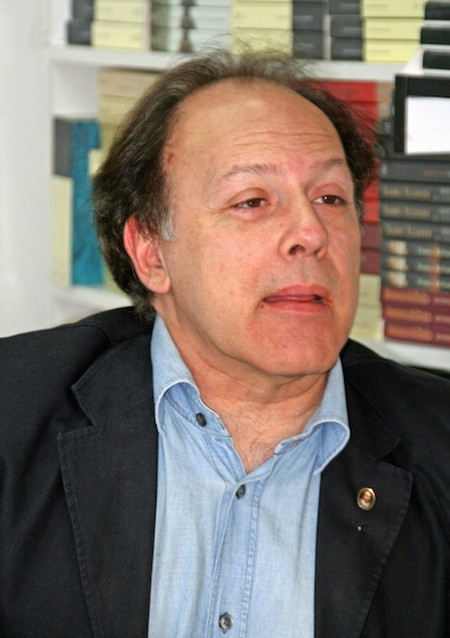 According to the books written by Javier Marías (born in Madrid, 1951), love, friendship and the paths we follow in our lives are a matter of opportunity and chance, location and time, rather than true and thoughtful considerations. His literary universe compels us to question our day-to-day decisions, which – if we are to believe him – are influenced by random actions and not based on affirmed choices.

In 2006, Javier Marías became a member of the Royal Spanish Academy, an institution that ensures the constant adaptation of the Spanish language to the needs of its speakers, but his commitment to perfection in the command of language has been evident since he started writing. His first novel, Los dominios del lobo, was published when he was only 19 years old!

Extremely detail-oriented and thorough, his prose, more intellectual than decorative, arouses the curiosity of the reader in a way that is as gripping as it is imperceptible, without gratuitous enigmas. His books are perfectly put together: nothing is written in vain, every single element has a relevance that may pass unnoticed at first sight, but is picked up later to construct smart and unpredictable associations.

Javier Marías is a meticulous writer who seems to follow an intricate network of transformations and repetitions as his oeuvre abounds in faithfully recurring themes: the importance of things we unconsciously do that lead us to irreversible situations as time goes by or within the abstract future, the impossibility of certainty in knowledge and the fragility of memory, or the reflection on the constant passage of time that is felt so deeply by the living, and not at all by the dead.

Nevertheless, and without any room for doubt, the main concern of Javier Marías is to make readers aware of the danger of words. Speaking without caution can bring about misunderstanding and misfortune and, for the same reason, it is necessary to keep some secrets undisclosed. He gives key importance to the words we pronounce, which bind us, as long as our interlocutor knows – forever – to what we have said (unless, hopefully, the words fall into oblivion).

Javier Marías is the most internationally admired contemporary Spanish writer, and his renown is due to the excellence of his work. His experience as a professor at the University of Oxford is the basis of several novels: All Souls, Dark Back of Time and his monumental masterpiece, the trilogy Your Face Tomorrow, in which he spent 8 years of work and obsession with British espionage. A Heart So White, a novel about a secret, set off his international fame and his latest novel, The Infatuations, which is also his first work with a female narrator, has received rave reviews.

Javier Marías is also an article writer for the Sunday supplement of the Spanish newspaper El País, and has published several books of short stories. As he states in his latest short story collection, Mala índole, the books we do not read are full of warnings; we will never know them, or they arrive too late. Nothing more than food for thought.