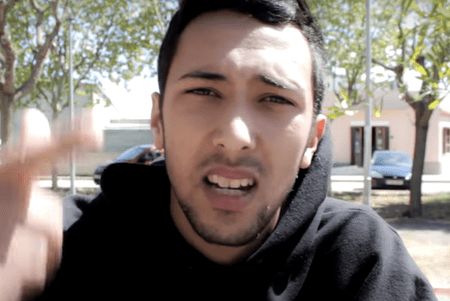 Rapper Josep Miquel Arenas Beltrán, known by the stage name Valtonyc, has been sentenced to three and a half years in prison after hitting out at the Spanish royal family in a song.

The 24-year-old musician from Mallorca criticised his country’s monarchy in the track ‘Tuerka Rap’.

In the song, he criticises the Spanish monarchy for their spending, their foreign policy and their relations with the Saudi royal family.

He raps: ‘The situation worries me quite a bit, how to support two families: mine, and the royal one.’

Spain’s Supreme Court upheld the three-and-a-half-year ruling after the rapper had previously been sentenced by a court in Madrid for ‘inciting terrorism’ and ‘insulting the crown’.

According to Catalan News, 16 of Valtonyc’s songs, including ‘Fascism Is Cured by Dying’ and ‘They Should Be Afraid 2’, were exhibited as evidence in court.

The tracks were posted on his YouTube channel and the rap site HH Groups.

Valtonyc described his lyrics as ‘extreme, provocative, allegorical and symbolic’ and claimed they were protected by laws of freedom of expression.

But the court ruled that that his songs ‘supported and praised’ terrorist groups ETA and GRAPO.

Valtonyc was also found guilty of threatening the leader of a political party (Jorge Campos, president of Círculo Balear).

The court said the songs contain praise of ‘violent means employed by [terrorist] organisations and contain an incitement to their reiteration’.

Arenas tweeted afterwards: ‘The Supreme Court sentence is already out. Three years and six months of jail for my songs. I have to enter prison. As soon as I have more information, I’ll say more.’

Ada Colau, the Mayor of Barcelona, expressed solidarity with Arenas, posting: ‘Sad and dark times when you have to fight for something so obvious as #rappingisnotacrime, singing about Bourbon thieves… is #freedomofexpression.’

The rapper has over 11,000 followers on his YouTube channel.