Rafael Moneo: An Architect in Context

Spanish architect Rafael Moneo’s name might not be as instantly recognizable as contemporaries like Frank Gehry or I.M. Pei. In Moneo’s case, however, this is partly by design. An architect celebrated both for his teaching and design, Rafael Moneo’s career is one that is defined by context, be that of history or surroundings. 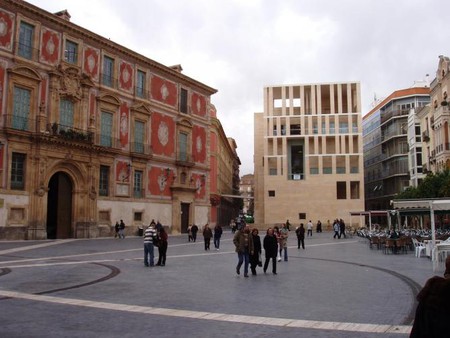 Rafael Moneo’s buildings look like buildings. That is to say, they don’t look like sailboats or fish or crumpled up paper. That is not to say, however, that they look boring. One only needs to observe the soaring, orange-toned facade of the Moneo-designed Bankinter headquarters in Madrid for evidence of this. However, despite the building’s dynamic appearance, Rafael Moneo’s name may not instantly come to mind for any observers not well versed in contemporary Spanish architecture. And perhaps most interestingly, this may just be Moneo’s hope.

A short biography of the architect, penned upon his winning the Pritzker Prize for architecture in 1996 offers some personal context. Born in Spain in 1937, Rafael Moneo originally showed interest in philosophy and art. However, it was architecture he chose to study when he left home in 1954. Moneo particularly credits his history of architecture professor at the Madrid University School of Architecture as a strong influence. A more recent article describes Moneo’s interest in an architectural canon[1], or historically rooted base of knowledge and solutions from which contemporary architects could draw, something that brings further attention to just how significant Moneo finds such historical context to be.

This appreciation not only for history but for the broader sources which can influence architectural design would only be furthered after his graduation in 1961, at which point Moneo won a spot at the Academy of Spain in Rome. It was both an opportunity to admire the particularly historical architecture of Rome itself, but also became a chance to befriend others at the Academy. This included musicians, painters, and sculptors, and it’s not difficult to imagine how these friendships may have shaped Moneo’s architectural practice, particularly when looking at a building like the City Hall of Murcia, for which Moneo thought of a musical score when ordering the columns.

In 1965, Moneo returned to Madrid and began teaching at his alma mater, a move that would prove the start of an illustrious career in teaching, one that would span such institutions as the Cooper Union School of Architecture, the University of Lausanne in Switzerland, Harvard, and Princeton. The same article on his interest in an architectural canon notes how a piece published on the architect shortly after his winning the Pritzker Architecture Prize focused on his teaching career rather than his buildings, noting the way he influenced a generation Spanish architects. Here, one can see how his significance as an architect was not shaped solely by how he applied his architectural knowledge, but also by how he passed it on.

However, it is not just a focus on the history and theory of architecture and conveying that knowledge to others that mires Moneo’s practice in context. Many of his buildings are known for the way in which they relate to their surroundings, something his addition to the Prado Museum is noted for, but a feature also prominent in the Museum of the Roman Theatre of Cartagena. Both projects presented contextual challenges, in which he had to adapt his work to already present architecture, simultaneously blending in, standing out and problem solving. It is this last element upon which he focused, creating in the first case a way to connect various aspects of the beloved landmark that is the Prado, and in the second case better enabling engagement with the historical significance of a site of ancient ruins.

And of the Prado, perhaps the work for which his name could have become widely known, Moneo felt that it was not the opportunity to focus on any individual’s personal expression. He instead viewed his work as a national service, by which he hoped to preserve the museum’s own character. Herein lies the reason Moneo may not be too concerned with people knowing his name. While comparable work by I.M. Pei or Frank Gehry might gain attention for these architects, Moneo in turn felt his role was simply to draw upon his own knowledge to help the landmark better function, to draw this positive attention to the museum rather than himself. While this dedication to context may not earn him as high a degree of renown as many celebrated architects of our age, it has certainly helped him produce impressive work, perhaps earning him his own spot in the architectural canon.